From Wikipedia, the free encyclopedia
Jump to navigation Jump to search
1927 film by Frank Borzage

7th Heaven (also known as Seventh Heaven) is a 1927 American silent romantic drama directed by Frank Borzage, and starring Janet Gaynor and Charles Farrell. The film is based upon the 1922 play Seventh Heaven, by Austin Strong and was adapted for the screen by Benjamin Glazer.[3] 7th Heaven was initially released as a standard silent film in May 1927. On September 10, 1927, Fox Film Corporation re-released the film with a synchronized Movietone soundtrack with a musical score and sound effects.

In 1995, 7th Heaven was selected for preservation in the United States National Film Registry by the Library of Congress as being "culturally, historically, or aesthetically significant".[5][6] 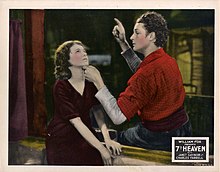 The Broadway play upon which the film is based starred George Gaul and Helen Menken and ran at the Booth Theatre for 704 performances.[7]

When the play was adapted for the screen, Janet Gaynor and Charles Farrell were cast in the lead roles. The pairing proved to be so popular, the two went on to star in 11 more films together and were dubbed "America's Favorite Lovebirds".[8][9]

7th Heaven features the song "Diane" by Ernö Rapée and Lew Pollack, who wrote the song specifically for the film. The song is included on the re-released version of the film.[10]

7th Heaven initially premiered at the Carthay Circle Theatre in Los Angeles replacing another Fox melodrama What Price Glory?, which had been playing since November 1926.[1] A second opening was held at the Sam H. Harris Theatre in New York City on May 25.[11] Both openings earned a total of $14,500.[12] A series of Movietone shorts featuring Ben Bernie and his Orchestra, Gertrude Lawrence, Raquel Meller, and Charles "Chic" Sale preceded the film.[13]

Upon its release, 7th Heaven was a critical and commercial success.[14] The New York Times critic stated that the film "grips your interest from the very beginning and even though the end is melodramatic you are glad that the sympathetic but self-satisfied Chico is brought back to his heart-broken Diane." The critic also praised Borzage's direction, stating that the director "has given it all that he could put through the medium of the camera."[11] The film went on to play for 19 weeks in New York City and for 22 weeks in Los Angeles.[13]

Due to the film's success and the success of other Fox films featuring sound elements (Sunrise, What Price Glory?), the studio re-released 7th Heaven with a synchronized Movietone soundtrack, including a musical score arranged by Ernö Rapée and sound effects. The re-release version premiered at New York City's Roxy Theatre on September 10, 1927.[10]

By 1932, 7th Heaven had become the 13th-highest-grossing American silent, earning more than $2.5 million at the box office.[2]

A comparatively unknown 1937 remake of the film was produced as a sound feature starring Simone Simon, James Stewart, Jean Hersholt, and Gregory Ratoff, with Henry King directing. Unlike the 1927 version, the sound remake was not as financially successful.[15]

7th Heaven was adapted for the Lux Radio Theatre four times: October 14, 1934, with Miriam Hopkins and John Boles; October 17, 1938, with Jean Arthur and Don Ameche; October 18, 1944, with Jennifer Jones and Van Johnson; and finally on March 31, 1951, with Janet Gaynor and Charles Farrell, recreating their original roles.

A television adaptation was aired on October 26, 1953, on the anthology series Broadway Television Theatre. The episode stars Hurd Hatfield and Geraldine Brooks and was directed by Robert St. Aubrey.[16]

On May 26, 1955, a stage musical version of the film opened at the ANTA Theatre starring Gloria DeHaven and Ricardo Montalbán. It closed on July 2, 1955, after 44 performances.[17]

The theatrical poster for 7th Heaven is displayed on the wall of the student Watanabe's lodgings in the oldest surviving film by the Japanese director Yasujirō Ozu, Days of Youth: A Student Romance (Gakusei Romansu: Wakaki Hi, 1929).[20]