Air Jamaica was the national airline of Jamaica. It was owned and operated by Caribbean Airlines from May 2011 until the cessation of operations in 2015. Caribbean Airlines Limited, headquartered in Piarco, Trinidad and Tobago, had administrative offices for Air Jamaica located at Norman Manley International Airport in Kingston, Jamaica.

According to R.E.G. Davies in his Airlines of Latin America Since 1919, the first incarnation of Air Jamaica was founded on August 27, 1963, after the government of Jamaica decided not to invest in British West Indian Airways (BWIA). Dubbed Jamaica Air Service Ltd., its shareholders were the government of Jamaica (51 percent), the British Overseas Airways Corporation (BOAC), and BWIA (16 percent). BWIA's employees in Jamaica were transferred to the new airline. Service to Miami and New York began on May 1, 1966.

BOAC, Britain's major international airline at the time, and BWIA had continued to maintain the leased aircraft (this operating arrangement would not expire until the end of May 1969). The Jamaican government preferred a more independent approach and eventually prepared to establish a new company, Air Jamaica (1968) Ltd.

During the 1970s Air Jamaica expanded rapidly. Flights were added to Toronto (YYZ) and Montreal (YUL) in Canada, to Luis Muñoz Marín International Airport (SJU) in Puerto Rico, to Philadelphia (PHL) and many other destinations, especially across the Caribbean. Long-haul services to Europe were started on 1 April 1974. Air Jamaica used a Douglas DC-8 and three DC-9s for a large part of the 1970s, but the Boeing 727-200 became part of the fleet toward the end of the decade when the government bought out Air Canada's share. Growth slowed during the 1980s. New routes were opened to Baltimore (BWI) and Atlanta (ATL).

In 1989 the Jamaican government announced plans for the privatization of the airline, which had been fully state owned since Air Canada divested its 40 percent shareholding in 1980. However, it was not until May 1994 that a partial selloff was announced when a group of Jamaican and Canadian investors known as the Air Jamaica Acquisition Group (AJAG) agreed to acquire a 70 percent share of the carrier for $26.5 million. Another five percent share was earmarked for employees. The government retained responsibility for liabilities, which were considerable.

A merger of Air Jamaica with other Caribbean airlines was already being proposed, with British Airways invited to take a 25 percent holding in the venture. In the first stage, Air Jamaica was to have merged its operations with those of Trinidad and Tobago Airways, parent of BWIA. Guyana Airways Corporation and Leeward Islands Air Transport would be included in the venture later.

During the 1990s, Air Jamaica continued to expand. The airline took over the Kingston -Nassau, Bahamas (NAS) route, which had been left by British Airways, began a code sharing agreement with Delta Air Lines and opened a route to Phoenix (PHX, which was later dropped), and to Frankfurt (FRA), London (LHR), Manchester (MAN), Santo Domingo (SDQ) and Ft. Lauderdale (FLL). The route to Phoenix was opened because Air Jamaica was looking to expand in the American west beyond its route to Los Angeles (LAX). In 1994 the company was partially privatized, the private investors were led by hotelier Gordon "Butch" Stewart with the government retaining 25 percent of the company and giving five percent to the airline's employees. It continued operating Airbus jetliners, including the wide body Airbus A340, and began a feeder service, a frequent flyer program (7th Heaven), and an inflight magazine, named SkyWritings. In 1996, the airline was flying nonstop service between Kingston and London Heathrow Airport with an Airbus A310 jetliner.[7] In 1999, Air Jamaica was operating nonstop service between Montego Bay and Los Angeles with Airbus A320 aircraft.[8]

In December 2004, after financial losses, the government of Jamaica resumed full ownership of Air Jamaica. It employed 2,522 people as of March 2007.[5]

In 2007, the new Jamaican government began to consider privatization of Air Jamaica, seeking to remove an unsustainable venture from its balance sheet.[9][10]

In October 2007 Bruce Nobles, President and Chief Operational Officer of Air Jamaica from May 2002 to June 2003, was asked to return. He replaced William Rogers, who was interim President and CEO of the airline since the October 2007 resignation of CEO Michael Conway.

On 4 July 2009, The Jamaica Gleaner reported that U.S.-based Spirit Airlines had reached an agreement with the Jamaican government to acquire the national airline.[11]

On 17 December 2009, it was reported that the Prime Minister of Jamaica had recently approached the government of Trinidad and Tobago regarding a possible merger or acquisition by Caribbean Airlines Limited.[12]

The airline operated scheduled services from Kingston and Montego Bay to seven destinations in the Caribbean, Canada and the United States. The airline's acquisition by Caribbean Airlines Limited of Trinidad and Tobago was implemented on May 1, 2010. However the current owners intended to keep the name Air Jamaica for as long as they were in possession of the company.[15]

Air Jamaica ceased all operations during 2015.

According to the November 1, 1980 Air Jamaica system timetable, the airline was serving the following destinations:[18]

The above referenced Air Jamaica system timetable states the airline was operating Boeing 727-200, Douglas DC-8 (both the standard DC-8 as well as the stretched Super DC-8) and McDonnell Douglas DC-9-30 jetliners at this time with all transatlantic flights being operated with DC-8 aircraft.

As of September 2011, the Air Jamaica fleet consists of the following aircraft with an average age of 7.4 years:[19] 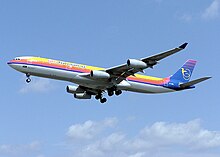