Adam Whitney Savage (born July 15, 1967)[1] is an American special effects designer and fabricator, actor, educator, and television personality and producer, known as the former co-host (with Jamie Hyneman) of the Discovery Channel television series MythBusters and Unchained Reaction.[2] His model work has appeared in major films, including Star Wars: Episode II – Attack of the Clones and The Matrix Reloaded. He is the host of a new TV program, Savage Builds, which premiered on the Science Channel on June 14, 2019.[3]

Savage was born in New York City and was raised in Sleepy Hollow, New York.[4] He graduated from Sleepy Hollow High School in 1985.[5] His maternal grandfather Cushman Haagensen was a surgeon who pioneered breast cancer surgery.[6] His father Whitney Lee Savage (1928–1998) was a painter, filmmaker, and animator known for his work on Sesame Street, and he has a permanent exhibit in the Avampato Discovery Museum in Charleston, West Virginia.[7] Whitney Lee was also known for directing the 1968 underground short film Mickey Mouse in Vietnam.[8] His mother Karen is a psychotherapist. He was the second youngest of six children, with the four older children coming from his parents' previous marriages. He has two older brothers,[9] two older sisters, and one younger sister.[10] His sister Kate Savage is also an artist. As a teenager in Sleepy Hollow, he routinely visited the local bike shop to have flat tires fixed. The shop showed him how to do the repairs himself. From this experience, Savage said, "I realized you could take a bike apart and put it back together and it wasn't that hard…. I've been building and putting bicycles together since then."[5]

Savage began acting as a child and has had five years of acting school.[2] His early credits include voicing animated characters that his father produced for Sesame Street, Mr. Whipple's stock boy Jimmy in a Charmin commercial, a helper in the special effects of Star Wars, and a drowning young man saved by a lifeguard in the 1985 Billy Joel music video "You're Only Human (Second Wind)".[11]

Savage abandoned acting by the time he was 19. "I had passed on that in favor of doing stuff with my hands", he said. He describes MythBusters as "the perfect marriage of two things, performance and special effects."[12] On November 25, 2011, he received an honorary doctorate from the University of Twente (Enschede, Netherlands) for popularizing science and technology.[13][14]

Savage has worked as an animator, graphic designer, carpenter, projectionist, film developer, television presenter, set designer, toy designer, and gallery owner. He worked as a model maker on the films Galaxy Quest, Bicentennial Man, Star Wars: Episode II – Attack of the Clones, The Matrix Reloaded, and Space Cowboys, among others.

Savage played the role of a helpful engineer in the 2001 film Ever Since the World Ended[15] and the role of an army surplus store owner who sells a man a rocket engine for his pickup truck in 2006 in The Darwin Awards, which also featured MythBusters co-star Jamie Hyneman.[16] He made a cameo appearance with Hyneman on CSI: Crime Scene Investigation on the May 1, 2008, episode "The Theory of Everything." In the "making of" material for The Matrix Revolutions, he appears in his role as a special effects artist and discusses some of the miniature effects used and the difficulties involved.

He previously taught advanced model making in the department of Industrial Design at the Academy of Art University in San Francisco.[2]

Savage has become a regular presenter at magician James Randi's annual skeptics' conference, The Amaz!ng Meeting, since first appearing in January 2006.[17] Savage credits his introduction to the skeptical community to Michael Shermer, who interviewed him for Skeptic Magazine.[18] He also appeared in the United Kingdom, giving a talk at the first Amazing Meeting London from October 3–4, 2009, hosted at the Mermaid Conference Centre, Blackfriars.[19]

Savage has also been a regular guest speaker at the annual Maker Faire since 2008, speaking on different topics such as his obsession with the dodo bird and problem solving, and also taking questions from the audience members about the MythBusters and other things.

Savage hosted an episode of the Discovery Channel series Curiosity, in which he speculated as to whether or not it is possible for humans to live forever. During the program various topics such as limb regeneration, organ printers, and even age reversal are discussed.

In 2011, Savage appeared as "Dan" in a short film directed by Frank Ippolito titled Night of the Little Dead.[21] 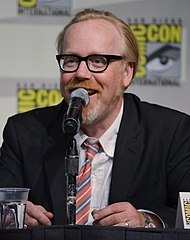 Savage and Hyneman are judges on the game show Unchained Reaction which premiered in March 2012.[22]

Savage is an occasional guest host for lecture events at the San Francisco-based non-profit City Arts & Lectures,[23] and delivered a keynote address at South by Southwest (SXSW) Interactive Festival on March 10, 2014.[24]

On March 24th, 2012 Savage appeared as a featured speaker at the first Reason Rally in Washington D.C.

Savage is a co-host on the weekly podcast Still Untitled: The Adam Savage Project. The project launched on June 5, 2012, and is in the format of a conversation between Savage, Will Smith, Norman Chan, and Simone Giertz about topics from science and movies to making and work ethic. Episodes typically last 30–45 minutes.[27]

Savage is currently an editor and contributor at Tested.com.[28][29]

In April 2017, Savage played the role of a mission specialist in episode Caliban's War of the series The Expanse.[32]

In June 2017 Savage was named Humanist of the Year by the American Humanist Association at their annual Conference.[33]

In April 2018, Discovery announced that Savage will host and produce a new series called MythBusters Jr, a series focused on a group of young scientists tasked with completing various experiments of challenges through the use of STEAM skills.[34][35]

In July 2018, Savage in a collaboration with Weta Workshop created and acted in the shortfilm A Farewell To Arms.[36] 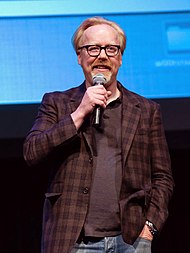 Savage's role with his co-hosts is to disprove or confirm myths through testing and experiments done at different scales. His demeanour on MythBusters is animated and energetic, providing a foil to Jamie Hyneman's more reserved straight-man persona.[38]

Savage and Hyneman were the sole hosts of the show for the first season of MythBusters. They introduced members of Hyneman's staff in the second season who began to appear regularly; Kari Byron, Tory Belleci, and welder Scottie Chapman appeared in the second season. In the third season, Chapman was replaced by Grant Imahara, a robot builder and model maker.

Filmed in San Francisco and edited in Artarmon, New South Wales, Australia, MythBusters aired 282 total episodes before its cancellation at the end of its 2016 season in March.

Savage expressed an interest in proving natural selection over creationism on MythBusters.[39] However, he conceded that such an episode is unlikely because MythBusters has a policy against trying to disprove supernatural phenomena.[40]

On November 15, 2017, sister network Science Channel revived the series with the new hosts Jon Lung and Brian Louden, who were selected via the competition spin-off MythBusters: The Search.[41] It is now filmed in Santa Clarita and on location in other parts of southern California.

Savage has a lifelong interest in costume making and cosplay: "I remember my mom getting me a 'Jaws' costume when 'Jaws' came out . . . and wearing a Batman costume. Back then, everyone dressed up as hobos." He strives for authenticity with his costumes. While in high school, he and his father made a suit of armor out of aluminum roof flashing that had seven hundred rivets. "I wore it to school and passed out from heat exhaustion in math class. I woke up in the nurse's office and the first thing I said was 'Where's my armor?'"[5]