From Wikipedia, the free encyclopedia
Jump to navigation Jump to search
This article is about the philosophical term. For other uses, see Aletheia (disambiguation).
Not to be confused with Eileithyia.

Aletheia (Ancient Greek: ἀλήθεια) is truth or disclosure in philosophy. It was used in Ancient Greek philosophy and revived in the 20th century by Martin Heidegger.

Aletheia is variously translated as "unclosedness", "unconcealedness", "disclosure" or "truth". The literal meaning of the word ἀ–λήθεια is "the state of not being hidden; the state of being evident." It also means factuality or reality.[1] It is the opposite of lethe, which literally means "oblivion", "forgetfulness", or "concealment".[2] According to Pindar's First Olympian Ode,[3] Aletheia is the daughter of Zeus, while Aesop's Fables[4] state she was crafted by Prometheus. 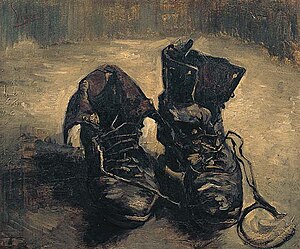 A painting that reveals (alethe) a whole world. Heidegger mentions this particular work of Van Gogh's in "The Origin of the Work of Art".

In the early to mid 20th-century, Martin Heidegger brought renewed attention to the concept of aletheia, by relating it to the notion of disclosure, or the way in which things appear as entities in the world. While he initially referred to aletheia as "truth", specifically a form that is pre-Socratic in origin, Heidegger eventually corrected this interpretation, writing:

To raise the question of aletheia, of disclosure as such, is not the same as raising the question of truth. For this reason, it was inadequate and misleading to call aletheia, in the sense of opening, truth."[5]

Heidegger gave an etymological analysis of aletheia and drew out an understanding of the term as 'unconcealedness'.[6] Thus, aletheia is distinct from conceptions of truth understood as statements which accurately describe a state of affairs (correspondence), or statements which fit properly into a system taken as a whole (coherence). Instead, Heidegger focused on the elucidation of how an ontological "world" is disclosed, or opened up, in which things are made intelligible for human beings in the first place, as part of a holistically structured background of meaning.

Heidegger also wrote that "Aletheia, disclosure regarded as the opening of presence, is not yet truth. Is aletheia then less than truth? Or is it more because it first grants truth as adequatio and certitudo, because there can be no presence and presenting outside of the realm of the opening?"[7]

Heidegger began his discourse on the reappropriation of aletheia in his magnum opus, Being and Time (1927),[8] and expanded on the concept in his Introduction to Metaphysics. For more on his understanding of aletheia, see Poetry, Language, and Thought, in particular the essay entitled "The Origin of the Work of Art", which describes the value of the work of art as a means to open a "clearing" for the appearance of things in the world, or to disclose their meaning for human beings.[9] Heidegger revised his views on aletheia as truth, after nearly forty years, in the essay "The End of Philosophy and the Task of Thinking," in On Time and Being.