Angel of the Lord 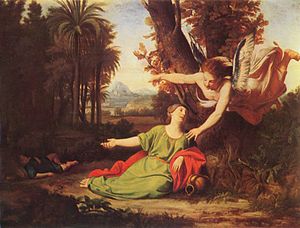 The Angel of the Lord appearing to Hagar in the wilderness, as depicted by Nicolas Colombel (1644-1717)

The (or an) angel of the LORD (Hebrew: מַלְאַךְ יְהוָה‎ malakh YHWH "messenger of Yahweh") is an entity appearing repeatedly in the Tanakh (Old Testament) on behalf of God (Yahweh).

A closely related term is "angel of God" (mal'akh 'Elohim), mentioned 12 times (2 of which are plural). Another related expression, Angel of the Presence, occurs only once (Isaiah 63:9).

The New Testament uses the term "angel of the Lord" (ἄγγελος Κυρίου) several times, once (Luke 1:11–19) identified with Gabriel.

Examples of use of the Hebrew term מַלְאַךְ יְהוָה are found in the following verses, here given in the King James Version translation:

The term "angel of God" (Heb. mal'akh 'Elohim) occurs 12 times (2 of which are plural). The following are examples: 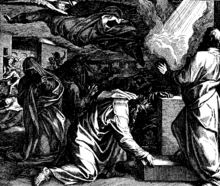 In addition, there are mentions of God "sending an angel", of which the following are examples:

An angel of the Lord who is mentioned in Luke 1:11 identifies himself as Gabriel in Luke 1:19.

Most appearances of the "angel of the Lord" leave the reader with the question of whether it was an angel or YHWH who appeared. Apart from the view that "the angel of the Lord is just that – an angel",[7] a wide array of solutions have been offered, such as making the angel an earthly manifestation of God, some kind of avatar of God or the pre-incarnated Christ.

In the Catholic Encyclopedia (1907) Hugh Pope writes: "The earlier Fathers, going by the letter of the text in the Septuagint, maintained that it was God Himself who appeared as the Giver of the Law to Moses. It was not unnatural then for Tertullian [...] to regard such manifestations in the light of preludes to the Incarnation, and most of the Eastern Fathers followed the same line of thought." Pope quotes the view of Theodoret that this angel was probably Christ, "the Only-begotten Son, the Angel of great Counsel", and contrasts Theodoret's view with the opposite view of the Latin Fathers Jerome, Augustine, and Gregory the Great that it was no more than an angel, a view that, he says, "was destined to live in the Church, and the Scholastics reduced it to a system". As an exponent of this view he quotes Augustine, who declared that "the angel is correctly termed an angel if we consider him himself, but equally correctly is he termed 'the Lord' because God dwells in him." He indicates, however, that within the Catholic Church the opposite view was also upheld.[5]

The appearances of the "angel of the Lord" are in fact often presented as theophanies, appearances of YHWH himself rather than a separate entity acting on his behalf.[8] In Genesis 31:11–13, "the angel of God" says, "I am the God of Beth-el". In Exodus 3:2–6 "the angel of Yahweh" (מלאך יהוה) appeared to Moses in the flame of fire, and then "Yahweh" (יהוה) says to him: "I am the God of thy father". Compare also Genesis 22:11; Judges 6:11–22. At times the angel of the Lord speaks in such a way as to assume authority over previous promises (see Gen. 16:11 and 21:17). According to the New American Bible, the visual form under which God appeared and spoke to men is referred to indifferently in some Old Testament texts either as God's angel or as God himself.[9]

Another interpretation builds on the usage by which ancient spokesmen, after an introductory phrase, used the grammatically first person in proclaiming the point of view of the one they represent.[10]

Another proposal is Samuel A. Meier's interpolation theory,[11] which holds that, originally, stories in which there is ambiguity between Yahweh and the "angel of Yahweh" were written with Yahweh himself delivering the message. Later, copyists inserted the term mal’akh before the divine name to modify the narratives, in order to meet the standards of a changing theology which more strongly emphasized a transcendent God. If the term mal’akh is removed from these passages, the remaining story fits neatly with a "default" format in Near Eastern literature in which the deity appears directly to humans without an intermediary. The addition of mal’akh does not require any change in the form of the verbs connected to it, since both mal’akh and a deity such as Yahweh or Elohim are of masculine grammatical gender and since the noun before which mal’akh is introduced remains unaffected on the consonantal level. On the other hand, the removal of the word mal’akh from the narration usually makes it more coherent and in line with its Ancient Near East literary context.[12]

Although Wojciech Kosior favours this interpolation theory, he mentions some unsolved difficulties connected with it: the large number of similar theophanies in which the word mal’akh has not been added to the names of Yahweh and Elohim and the fact that it is never associated with names such as El-Elyon, El-Shadday or El-Ro’eh worshipped by the biblical Hebrews.[13]

The early Fathers of the Church, such as Justin Martyr, identify the angel of the Lord as the pre-incarnate Christ[14] whose appearance, i.e. Christophany, is recorded in the Hebrew Bible. On the reason why some early Christians viewed Jesus as the angel of the Lord, Susan Garrett says:

[The logic behind the] reading of Jesus into accounts of the angel of the LORD went deeper. Many Jews before and during the time of Jesus were deeply interested in angels. Some understood the angel of the LORD as a being completely separate from God—a sort of angelic vizier or righthand angel, who served as head of the heavenly host and in other important capacities, including as a mediator between God and humans. Further, some Jews routinely appropriated language used in Scripture to describe the angel of the LORD and used it to characterize certain of God’s attributes, including God’s word, glory, wisdom, spirit, power, and name—almost as if these aspects of the Deity were themselves independent angels. In other words, quite apart from Christianity there was talk among ancient Jews of God’s word, God’s glory, and so forth in terms highly reminiscent of the angel of the LORD. So, when early Christian authors like Justin Martyr connected Jesus with God’s word and that word, in turn, with the angel of the LORD, they were not inventing from scratch so much as adding a new layer to well-established ways of reading Scripture.[15]

The Hellenistic Jewish philosopher Philo identified the angel of the Lord (in the singular) with the Logos.[16][17]

On the other hand, Knofel Staton says: "The idea that this angel was Christ is unlikely for many reasons, which include the following: 1) God never said to any angel (including the 'angel of the Lord') 'you are my son' (Heb 1:5) ...";[19] Ben Witherington says: "The angel of the Lord is just that – an angel. [... T]he divine son of God [...] was no mere angel of the Lord, nor did he manifest himself in some observable form prior to the Incarnation."[20]

Jehovah's Witnesses teach that the angel who brought the Israelites into their promised land and would not pardon transgression because God's name was in him (Exodus 23:20–21) was "God's firstborn Son", the pre-existent Christ, also called the archangel Michael, the Prince of the people of Israel mentioned in Daniel 10:21, a created being called "the Son of God" because created with qualities like those of his Father.[21][22]