Most arable land lies in the central part of Argolis. Its primary agricultural resources are oranges and olives. Argolis has a coastline on the Saronic Gulf in the northeast and on the Argolic Gulf in the south and southeast. Notable mountains ranges are the Oligyrtos in the northwest, Lyrkeio and Ktenia in the west, and Arachnaio and Didymo in the east.

Argolis has land borders with Arcadia to the west and southwest, Corinthia to the north, and the Islands regional unit (Troezen area) to the east. Ancient Argolis included Troezen. 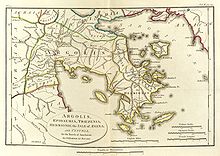 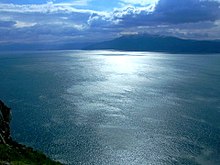 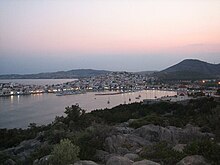 Parts of the history of the area can be found in the articles on Argos, Mycenae, Epidaurus, Nafplio, Troezen, Ermioni, Kranidi, and Tolo.

The regional unit Argolis is subdivided into 4 municipalities. These are (number as in the map in the infobox):[1]

As a part of the 2011 Kallikratis government reform, the regional unit Argolis was created out of the former prefecture Argolis (Greek: Νομός Αργολίδας). The prefecture had the same territory as the present regional unit. At the same time, the municipalities were reorganised, according to the table below.[1]

The provinces of Argolis were:

The area is connected by highways: