From Wikipedia, the free encyclopedia
Jump to navigation Jump to search
"Bedwyr" redirects here. For other people with the name, see Bedwyr (given name).

Bedivere (/ˈbɛdɪvɪər/ or /ˈbiːdɪvɪər/; Welsh: Bedwyr; French: Bédoier, also Bedevere and other spellings) is one of the earliest characters to be featured in the Matter of Britain, originally appearing in several early Welsh texts in which he is named as Bedwyr Bedrydant. In the later versions, he is described as being the Knight of the Round Table of King Arthur who serves as Arthur's marshal and eventually returns Excalibur to the Lady of the Lake. He is frequently associated with his brother Lucan and his cousin Griflet, as well as with Kay.

In early Welsh sources, Bedwyr Bedrydant ("Bedwyr of the Perfect Sinew"[1]) is a handsome, one-handed knight under Arthur's command. His father is given as Pedrawd or Bedrawd, and his children as Amhren and Eneuawg, both members of Arthur's court.

One of the earliest direct references to Bedwyr can be found in the 10th-century poem Pa gur which recounts the exploits of a number of Arthur's knights, including Bedwyr, Cei (Kay) and Manawydan. Of Bedwyr, this narrative says:

They fell by the hundred / before Bedwyr of the Perfect-Sinew.
On the shores of Tryfrwyd / fighting with Garwlwyd / furious was his nature / with sword and shield.[2]

The 9th-century version of Englynion y Beddau ("The Stanzas of the Graves") gives Bedwyr's final resting place on Tryfan.[2] In the hagiography of Cadoc, Bedwyr is alongside Arthur and Cei in dealing with King Gwynllyw of Gwynllwg's abduction of Gwladys from her father's court in Brycheiniog. A possible allusion to Bedwyr could be found in the reference to Bedwyr's well in the 9th-century Marwnad Cadwallon ap Cadfan. The Welsh Triads name Bedwyr as "Battle-Diademed", and a superior to Drystan, Hueil mab Caw and even Cei.[3] A catchphrase often quipped by Cei, "by the hand of my friend" is likely a reference to Bedwyr's disability.[4]

Bedwyr is a prominent character in the tale of Culhwch and Olwen, in which he appears at the head of Arthur's court list with his friend Cei and is described as the most handsome man in the world (save for Arthur and Drych fab Cibddar), and the wielder of a magic lance.[5] He is called upon to accompany Culhwch on his quest to win Olwen's hand in marriage and is the first knight to strike the giant Ysbaddaden with the poisoned spear meant for Culhwch. Bedwyr goes on to assist Culhwch in completing the impossible tasks given to him by Ysbaddaden; he helps Cei and Goreu fab Custennin kill Wrnach the Giant, rescues Mabon ap Modron from his imprisonment, retrieves the hairs of Dillus the Bearded, captures the cauldron of Diwrnach during Arthur's attack on Ireland and takes part in the hunting of Twrch Trwyth with Arthur's dog Cavall at his side.[6] The tale ends with the completion of the tasks, the humiliation, and death of Ysbaddaden, and the marriage of Culhwch and Olwen.

Bedivere is one of Arthur's loyal allies in Geoffrey of Monmouth's Historia Regum Britanniae and maintains this position in much later Arthurian literature. He helps Arthur and Kay fight the Giant of Mont Saint-Michel, and joins Arthur in his war against Emperor Lucius of Rome, in which he dies fighting.[7] In Thomas Malory's Le Morte d'Arthur, 'Bedwyr' (as he is initially known) plays a similar role against the Giant, before disappearing from the text to return rather ingloriously as Sir Bedivere to accompany Arthur at his end.[8] In the original French romances, the later role belonged to his cousin, Griflet. 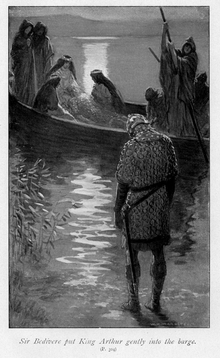 In several English versions of Arthur's death, including Malory's, the Alliterative Morte Arthure and the Stanzaic Morte Arthur, Bedivere and Arthur are among the few survivors of the Battle of Camlann (or of Salisbury). After the battle, at the request of the mortally wounded king, Bedivere casts away the sword Excalibur that Arthur had received from the Lady of the Lake. However, he does this only after twice thinking the sword too valuable to Britain to throw into the water.[9] When he reports that nothing in particular happened, King Arthur admonishes him, for Arthur knows that the mystical sword would create some supernatural event. Finally, Bedivere casts the sword into the water, at which a hand arises and catches the sword mid-air, then sinks into the waters, and Arthur is thus assured that the sword has been returned. Upon the death of Arthur, Bedivere enters a hermitage, where he spends the remainder of his life (the same hermitage, led by the Mordred-ousted Bishop of Canterbury, that Lancelot and some of his kindred knights will resort to in their own penitence). It is implied that both King Arthur and Queen Guinevere lie beside each other in or near there.

Some modern authors such as Rosemary Sutcliff (Sword at Sunset), Gillian Bradshaw (The Hollow Hills), and Mary Stewart (The Merlin Trilogy) give him Lancelot's traditional role as Guinevere's lover, Lancelot having been added to the cycle too late to seem historical.[10][11]