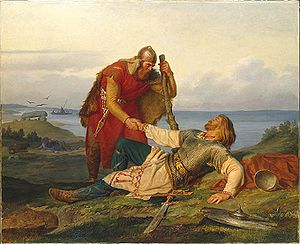 The Norwegian warrior Örvar-Oddr bids a last farewell to his blood brother, the Swedish warrior Hjalmar, by Mårten Eskil Winge (1866).

Blood brother can refer to one of two things: a male related by birth, or two or more men not related by birth who have sworn loyalty to each other. This is in modern times usually done in a ceremony, known as a blood oath, where each person makes a small cut, usually on a finger, hand or the forearm, and then the two cuts are pressed together and bound, the idea being that each person's blood now flows in the other participant's veins. The act may carry a risk due to blood-borne diseases. The process usually provides a participant with a heightened symbolic sense of attachment with another participant.

The Norsemen entering into the pact of foster brotherhood (Icelandic: Fóstbræðralag) involved a rite whereby they let their blood flow while they ducked underneath an arch formed by a strip of turf propped up by a spear or spears. An example is described in Gísla saga.[1][2] In Fóstbræðra saga, the bond of Thorgeir Havarsson (Þorgeir Hávarsson) and Thormod Bersason (Þormóð Bersason) is sealed by such ritual as well, the ritual being called a leikr.[3]

Örvar-Oddr's saga contains another notable account of blood brotherhood. Örvar-Oddr, after fighting the renowned Swedish warrior Hjalmar to a draw, entered into foster-brotherhood with him by this turf-raising ritual. Afterwards, the strand of turf was put back during oaths and incantations.[dubious – discuss][citation needed]

In the mythology of northern Europe, Gunther and Högni became the blood brothers of Sigurd when he married their sister Gudrun; in Wagner's Ring Cycle, the same occurs between Gunther and Wagner's version of Sigurd, Siegfried, which is marked by the "Blood Brotherhood Leitmotiv". Additionally, it is briefly stated in Lokasenna that Odin and Loki are blood brothers.

Among the Scythians, the covenantors would allow their blood to drip into a cup; the blood was subsequently mixed with wine and drunk by both participants. Every man was limited to having at most three blood brotherhoods at any time, lest his loyalties be distrusted; as a consequence, blood brotherhood was highly sought after and often preceded by a lengthy period of affiliation and friendship (Lucian, Toxaris). 4th-century BC depictions of two Scythian warriors drinking from a single drinking horn (most notably in a gold appliqué from Kul-Oba) have been associated with the Scythian oath of blood brotherhood.[4]

The Hungarian hajduks had a similar ceremony, though the wine was often replaced with milk so that the blood would be more visible.[citation needed]

In Asian cultures, the act and ceremony of becoming blood brothers is generally seen as a tribal relationship, that is, to bring about alliance between tribes. It was practiced for this reason most notably among the Mongols and early Chinese.[citation needed]

In Romance of the Three Kingdoms, the Chinese classical literature, the three main characters took an oath of blood brother, the Oath of the Peach Garden, by sacrificing a black ox and a white horse and swearing faith;[5] other blood oaths involving animal sacrifice were characteristic of rebel groups, such as the uprising led by Deng Maoqi in the 1440s, of criminal organizations, such as the triads or the pirates of Lin Daoqian, and of non-Han ethnic minorities such as the Mongols or Manchu.[6] In Mongolian history, Genghis Khan the Great had an anda, blood brother in Mongolian.[7] 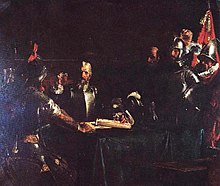 In the Philippines, blood compacts (sandugo or sanduguan, literally "one blood") were ancient rituals intended to seal a friendship or treaty, or to validate an agreement. They are described in the records of early Spanish and Portuguese explorers to the islands. The most well-known version of the ritual from the Visayan people involves mixing a drop of blood from both parties into a single cup of wine that is then drunk. Other versions also exist, like in Palawan which describes a ritual involving making a cut on the chest and then daubing the blood on the tongue and forehead.[8][9]

The blood oath was used in much the same fashion as has already been described in much of Sub-Saharan Africa. The British colonial administrator Lord Lugard is famous for having become blood brothers with numerous African chiefs as part of his political policy while in Africa. A powerful blood brother of his was the Kikuyu chieftain Waiyaki Wa Hinga. David Livingstone wrote of a similar practice called 'Kasendi'.[10]

Blood brothers among larger groups were common in ancient Southeastern Europe where, for example, whole companies of soldiers would become one family through the ceremony. It was perhaps most prevalent in the Balkans during the Ottoman era, as it helped the oppressed people to fight the enemy more effectively; blood brotherhoods were common in what is today Albania, Bosnia and Herzegovina, Bulgaria, Croatia, Greece, Montenegro, Serbia, Republic of North Macedonia. Christianity also recognized sworn brotherhood in a ceremony (known as Greek: adelphopoiesis, Slavic: pobratimstvo in the Eastern Orthodox churches; known as Latin: ordo ad fratres faciendum in the Roman Catholic church). The tradition of intertwining arms and drinking wine is also believed to be a representation of becoming blood brothers.[citation needed]