From Wikipedia, the free encyclopedia
Jump to navigation Jump to search
For other uses, see Bride of Christ (disambiguation). 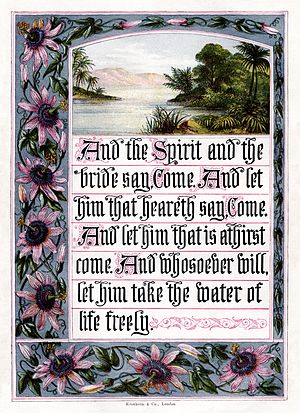 An 1880 Baxter process illustration of Revelation 22:17 by Joseph Martin Kronheim.

The Bride of Christ or the bride, the Lamb's wife is a term used in reference to a group of related verses in the Bible, in the Gospels, Revelation, the Epistles and related verses in the Old Testament. Sometimes, the bride is implied by calling Jesus a bridegroom. For over 1500 years, the Church was identified as the bride betrothed to Christ. However, there are instances of the interpretation of the usage varying from church to church. Most believe that it always refers to the church.

In the Gospel of John, John the Baptist speaks of Jesus Christ as the bridegroom and mentions the bride.

That is the only place in the Gospels that the bride is mentioned, but because a bridegroom must have a bride, all other mentions of the bridegroom imply the bride.

In the Gospels, when Jesus is asked why his disciples do not fast, but the followers of John and the Pharisees do, Jesus answers:

In Matthew 9:15, Mark 2:19 and Luke 5:34, the Apostles are referred to as the friends, guests, or children depending on the translation, of the Bridegroom commonly accepted to be Jesus Christ.

The Bridegroom is also mentioned in the Parable of the Ten Virgins.[Mt 25:1-13]

"Then the kingdom of heaven will be like ten virgins who took their lamps and went out to meet the bridegroom."

The Book of Revelation repeatedly mentions the appearance of the Bride.

And I John saw the holy city, new Jerusalem, coming down from God out of heaven, prepared as a bride adorned for her husband. ... And there came unto me one of the seven angels which had the seven vials full of the seven last plagues, and talked with me, saying, Come hither, I will shew thee the bride, the Lamb's wife. And he carried me away in the spirit to a great and high mountain, and shewed me that great city, the holy Jerusalem, descending out of heaven from God,[Revelation 21:2,9-10]

In the above passages, John, the author of the Book of Revelation, speaks of seeing the bride revealed and refers to her as the New Jerusalem, first mentioned in Revelation 3:12.

Note - The Greek word for bride is νύμφη (nymfi or numphe) as in Revelation 21:2, 9, (cf., 18:23; 22:17). This word, νύμφη , is understood to mean "a son's wife," or "daughter-in-law," -"bride." Revelation 19:7 which has γυνὴ (gune) means "wife" or "woman". The context of Revelation 19:7 is marriage so this should inform the reader why numerous Bible translations are consistent with the Greek in translating γυνὴ as "bride". The text provides the context coupled with an understanding of the culture. She is a betrothed "woman" getting married - a bride. Bride is the word chosen in translations such as NIV, NLT, ESV, NASB, ISV etc., [Revelation 21:2]

Comparing church to a bride[edit]

In Ephesians 5:22-33, Paul compares the union of husband and wife to that of Christ and the church.[1] The central theme of the whole Ephesians letter is reconciliation of the alienated within the unity of the church.[1] Ephesians 5 begins by calling on Christians to imitate God and Christ, who gave himself up for them with love.[5:2] Ephesians 5:1-21 contains a rather strong warning against foolishness and letting down one's guard against evil. Rather, the author encourages the readers to constantly give thanks with song in their hearts because of what God has done for all in Christ. That prelude to the subject's text takes up again the theme of loving submission that began with the example of Christ in 5:2: "Be submissive to one another out of reverence for Christ."5:21 It implies that the "Bride" is the body of believers that comprise the universal Christian Ekklēsia (Church) (lit. "called-out ones").

The ekklēsia is never explicitly called "the bride of Christ" in the New Testament. That is approached in Ephesians 5:22-33. A major analogy is that of the body. Just as husband and wife are to be "one flesh",[Eph. 5:31] this analogy for the writer describes the relationship of Christ and ekklēsia.[Eph. 5:32] Husbands were exhorted to love their wives "just as Christ loved the ekklēsia and gave himself for it.[Eph. 5:25] When Christ nourishes and cherishes the ekklēsia, he nourishes and cherishes his own flesh. Just as the husband, when he loves his wife is loving his own flesh.[Eph. 5:28] Members of the ekklēsia are "members of his own body" because it is written in Genesis 2:24 "and the two shall become one flesh". In [Eph. 5:31] Paul quotes the Genesis passage as what has been called a "divine postscript".[2]

In writing to the Church of Corinth in 2 Corinthians 11 Paul writes to warn the community of false teachers who would teach of another Christ, and to confess his concern that they will believe someone who teaches a false Christ, other than Christ Jesus of Nazareth whom he preached; Paul referred to the Church in Corinth as being espoused to Christ. "For I am jealous over you with godly jealousy: for I have espoused you to one husband, that I may present you as a chaste virgin to Christ. But I fear, lest by any means, as the serpent beguiled Eve through his subtlety, so your minds should be corrupted from the simplicity that is in Christ. For if he that cometh preacheth another Jesus, whom we have not preached, or if ye receive another spirit, which ye have not received, or another gospel, which ye have not accepted, ye might well bear with him".[2 Cor. 11:2-4]

In the writing to the Church in Rome, Paul writes, "Wherefore, my brethren, ye also are become dead to the law by the body of Christ; that ye should be married to another, even to him who is raised from the dead, that we should bring forth fruit unto God" (emphasis added).[Romans 7] Here, Paul seems to suggest that the Church is to be married to Jesus Christ of Nazareth, who was raised from the dead.

The earliest Christian tradition identifies Old Testament texts as symbolic of the divine love of God and people. The love poems of the Song of Songs and the Latter prophet Hosea have many references to an intimate correspondence of God and his people.[3] The Prophet Hosea notes his bride in chapter 2, verses 16 and following. The theme of bridal love is central in the dramatic marriage of Hosea (Hosea 1:2).