From Wikipedia, the free encyclopedia
Jump to navigation Jump to search
A title meaning anointed
This article is about the Christian theological title. For Jesus of Nazareth, see Jesus. For the Islamic theological concept of the Messiah, see Messiah in Islam. For other uses, see Christ (disambiguation).

The oldest known icon of Christ Pantocrator – Saint Catherine's Monastery. The halo is a representation of the divine Logos of Christ, and the two different facial expressions on either side emphasize Christ's dual nature as both divine and human.[1][2]

Christ, used by Christians as both a name and a title, is synonymous with Jesus.[5][6][7] It is also used as a title, in the reciprocal use "Christ Jesus", meaning "the Messiah Jesus", and independently as "the Christ".[8] The Pauline epistles, the earliest texts of the New Testament,[9] often refer to Jesus as "Christ Jesus" or "Christ".[10]

Although the original followers of Jesus believed Jesus to be the Jewish messiah, e.g. in the Confession of Peter, Jesus was usually referred to as "Jesus of Nazareth" or "Jesus, son of Joseph".[11] Jesus came to be called "Jesus Christ" (meaning "Jesus the Khristós", i.e. "Jesus the Messiah" or "Jesus the Anointed") by later Christians, who believe that his crucifixion and resurrection fulfill the messianic prophecies of the Old Testament.

Christ comes from the Greek word χριστός (chrīstós), meaning "anointed one".[12] The word is derived from the Greek verb χρίω (chrī́ō), meaning "to anoint."[12] In the Greek Septuagint, christos was used to translate the Hebrew מָשִׁיחַ (Mašíaḥ, messiah), meaning "[one who is] anointed".[13]

According to the Summa Theologica of Thomas Aquinas, in the singular case of Jesus, the word Christ has a twofold meaning, which stands for "both the Godhead anointing and the manhood anointed". It derives from the twofold human-divine nature of Christ (dyophysitism): the Son of man is anointed in consequence of His incarnated flesh, as well as the Son of God is anointing in consequence of the "Godhead which He has with the Father" (ST III, q. 16, a. 5).[17] 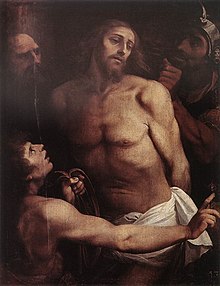 The Mocking of Christ by the Cavalier d'Arpino (1568–1640)
See also: Names and titles of Jesus in the New Testament and Holy Name of Jesus

The word Christ (and similar spellings) appears in English and in most European languages. English-speakers now often use "Christ" as if it were a name, one part of the name "Jesus Christ", though it was originally a title ("the Messiah"). Its usage in "Christ Jesus" emphasizes its nature as a title.[8][18] Compare the usage "the Christ".

The spelling Christ in English became standardized in the 18th century, when, in the spirit of the Enlightenment, the spelling of certain words changed to fit their Greek or Latin origins. Prior to this, scribes writing in Old and Middle English usually used the spelling Crist - the i being pronounced either as /iː/, preserved in the names of churches such as St Katherine Cree, or as a short /ɪ/, preserved in the modern pronunciation of "Christmas". The spelling "Christ" in English is attested from the 14th century.[19]

In modern and ancient usage, even in secular terminology, "Christ" usually refers to Jesus, based on the centuries-old tradition of such usage. Since the Apostolic Age, the

[...] use of the definite article before the word Christ and its gradual development into a proper name show the Christians identified the bearer with the promised Messias of the Jews.[20]

In the Ancient Greek text of the deuterocanonical books, the term "Christ" (Χριστός, translit. Christós) is found in 2 Maccabees 1:10[21][22] (referring to the anointed High Priest of Israel) and in the Book of Sirach 46:19[23][24], in relation to Samuel, prophet and institutor of the kingdom under Saul.

First page of Mark, by Sargis Pitsak (14th century): "The beginning of the gospel of Jesus Christ, the Son of God".

At the time of Jesus, there was no single form of Second Temple Judaism, and there were significant political, social, and religious differences among the various Jewish groups.[25] However, for centuries the Jews had used the term moshiach ("anointed") to refer to their expected deliverer.[20] The New Testament states that the long-awaited messiah had come and describes this savior as "the Christ". In Matt 16:16, the apostle Peter said, in what has become a famous proclamation of faith among Christians since the first century, "You are the Christ, the Son of the living God."[25]

Mark 1:1 ("The beginning of the gospel of Jesus Christ, the Son of God") identifies Jesus as both Christ and the Son of God. Matthew 1:1 uses Christ as a name and Matthew 1:16 explains it again with: "Jesus, who is called Christ". The use of the definite article before the word "Christ" and its gradual development into a proper name show that the Christians identified Jesus with the promised messiah of the Jews who fulfilled all the messianic predictions in a fuller and a higher sense than had been given them by the rabbis.[20]

The Gospels of Mark and Matthew begin by calling Jesus both Christ and the Son of God, but these are two distinct attributions. They develop in the New Testament along separate paths and have distinct theological implications. At the time in Roman Judaea, the Jews had been awaiting the "Messiah", and many people were wondering who it would be. When John the Baptist appeared and began preaching, he attracted disciples who assumed that he would be announced as the messiah, or "the one" that they had been awaiting.

In John 11:27 Martha told Jesus, "you are the Christ, the Son of God, who is coming into the world", signifying that both titles were generally accepted (yet considered distinct) among the followers of Jesus before the raising of Lazarus.[26]

In the trial of Jesus before the Sanhedrin and Pontius Pilate, it might appear from the narratives of Matthew and Luke that Jesus at first refused a direct reply to the high priest's question: "Art thou the Christ?", where his answer is given merely as "su eipas" ("thou hast said it"). The Gospel of Mark, however, states the answer as "ego eimi" ("I am"), and there are instances from Jewish literature in which the expression "thou hast said it" is equivalent to "you are right".[27] The Messianic claim was less significant than the claim to divinity, which caused the high priest's horrified accusation of blasphemy and the subsequent call for the death sentence. Before Pilate, on the other hand, it was merely the assertion of his royal dignity which gave grounds for his condemnation.[27]

The word "Christ" is closely associated with Jesus in the Pauline epistles, which suggests that there was no need for the early Christians to claim that Jesus is Christ because it was considered widely accepted among them. Hence Paul can use the term Khristós with no confusion as to whom it refers, and he can use expressions such as "in Christ" to refer to the followers of Jesus, as in 1 Corinthians 4:15 and Romans 12:5.[28] Paul proclaimed him as the Last Adam, who restored through obedience what Adam lost through disobedience.[29] The Pauline epistles are a source of some key Christological connections; e.g., Ephesians 3:17–19 relates the love of Christ to the knowledge of Christ, and considers the love of Christ as a necessity for knowing him.[30]

There are also implicit claims to him being the Christ in the words and actions of Jesus.[27] Episodes in the life of Jesus and statements about what he accomplished during his public ministry are found throughout the New Testament.

Christology, literally "the understanding of Christ,"[31] is the study of the nature (person) and work (role in salvation) of Jesus in Christianity.[32][33][34][35] It studies Jesus Christ's humanity and divinity, and the relation between these two aspects;[36] and the role he plays in salvation.

The earliest Christian writings gave several titles to Jesus, such as Son of Man, Son of God, Messiah, and Kyrios, which were all derived from the Hebrew scriptures. These terms centered around two themes, namely "Jesus as a preexistent figure who becomes human and then returns to God," and "Jesus as a creature elected and 'adopted' by God."

From the second to the fifth centuries, the relation of the human and divine nature of Christ was a major focus of debates in the early church and at the first seven ecumenical councils. The Council of Chalcedon in 451 issued a formulation of the hypostatic union of the two natures of Christ, one human and one divine, "united with neither confusion nor division".[37] Most of the major branches of Western Christianity and Eastern Orthodoxy subscribe to this formulation,[37] while many branches of Oriental Orthodox Churches reject it,[38][39][40] subscribing to miaphysitism.

The use of "Χ", derived from Chi, the Greek alphabet initial, as an abbreviation for Christ (most commonly in the abbreviation "Χmas") is often misinterpreted as a modern secularization of the term. Thus understood, the centuries-old English word Χmas, is actually a shortened form of CHmas, which is, itself, a shortened form for Christmas. Christians are sometimes referred to as "Xians", with the 'X' replacing 'Christ.[41]