From Wikipedia, the free encyclopedia
Jump to navigation Jump to search
Not to be confused with Cronus, the Titan father of Zeus.
For other uses, see Chronos (disambiguation).
Ancient Greek mythological Titan and personification of time

Chronos already was confused with, or perhaps consciously identified with, the Titan Cronus in antiquity due to the similarity in names.[2] The identification became more widespread during the Renaissance, giving rise to the allegory of "Father Time" wielding the harvesting scythe.[3]

He was depicted in Greco-Roman mosaics as a man turning the Zodiac Wheel.[4] Chronos might also be contrasted with the deity Aion as cyclical Time[5] (see aeon). Chronos is usually portrayed as an old, wise man with a long, grey beard, similar to Father Time. In some Greek sources, Kairos is mentioned as a brother of Chronos. However, other sources point out that it is his son. 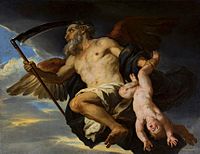 Chronos and his Child by Giovanni Francesco Romanelli, National Museum in Warsaw, a 17th-century depiction of Titan Cronus as "Father Time," wielding a harvesting scythe

During antiquity, Chronos was occasionally interpreted as Cronus.[6] According to Plutarch, the Greeks believed that Cronus was an allegorical name for Chronos.[7] In addition to the name, the story of Cronus eating his children was also interpreted as an allegory to a specific aspect of time held within Cronus' sphere of influence. According to this theory, Cronus represented the destructive ravages of time which consumed all things, a concept that was expressed literally when the Titan king devoured the Olympian gods — the past consuming the future, the older generation suppressing the next generation.[citation needed] During the Renaissance, the identification of Cronus and Chronos gave rise to "Father Time" wielding the harvesting scythe.[citation needed]

The original meaning and etymology of the word chronos are uncertain.[8] English words derived from it include chronology, chronometer, chronic, anachronism, and chronicle.

In the Orphic tradition, the unaging Chronos was "engendered" by "earth and water", and produced Aether and Chaos, and an egg.[9] The egg produced the hermaphroditic god Phanes who gave birth to the first generation of gods and is the ultimate creator of the cosmos.

Pherecydes of Syros in his lost Heptamychos ("the seven recesses"), around 6th century BC, claimed that there were three eternal principles: Chronos, Zas (Zeus) and Chthonie (the chthonic). The semen of Chronos was placed in the recesses of the Earth and produced the first generation of gods.[10]