Cladistics (/kləˈdɪstɪks/, from Greek κλάδος, kládos, "branch")[1] is an approach to biological classification in which organisms are categorized in groups ("clades") based on the most recent common ancestor. Hypothesized relationships are typically based on shared derived characteristics (synapomorphies) that can be traced to the most recent common ancestor and are not present in more distant groups and ancestors. A key feature of a clade is that a common ancestor and all its descendants are part of the clade. Importantly, all descendants stay in their overarching ancestral clade. For example, if within a strict cladistic framework the terms animals, bilateria/worms, fishes/vertebrata, or monkeys/anthropoidea were used, these terms would include humans. Many of these terms are normally used paraphyletically, outside of cladistics, e.g. as a 'grade'. Radiation results in the generation of new subclades by bifurcation, but in practice sexual hybridization may blur very closely related groupings.[2][3][4][5]

The techniques and nomenclature of cladistics have been applied to disciplines other than biology. (See phylogenetic nomenclature.)

Cladistics is now the most commonly used method to classify organisms.[6] 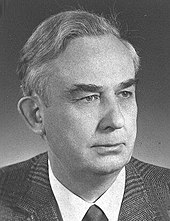 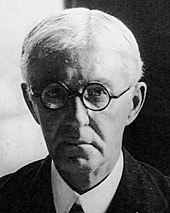 The original methods used in cladistic analysis and the school of taxonomy derived from the work of the German entomologist Willi Hennig, who referred to it as phylogenetic systematics (also the title of his 1966 book); the terms "cladistics" and "clade" were popularized by other researchers. Cladistics in the original sense refers to a particular set of methods used in phylogenetic analysis, although it is now sometimes used to refer to the whole field.[7]

What is now called the cladistic method appeared as early as 1901 with a work by Peter Chalmers Mitchell for birds[8][9] and subsequently by Robert John Tillyard (for insects) in 1921,[10] and W. Zimmermann (for plants) in 1943.[11] The term "clade" was introduced in 1958 by Julian Huxley after having been coined by Lucien Cuénot in 1940,[12] "cladogenesis" in 1958,[13] "cladistic" by Arthur Cain and Harrison in 1960,[14] "cladist" (for an adherent of Hennig's school) by Ernst Mayr in 1965,[15] and "cladistics" in 1966.[13] Hennig referred to his own approach as "phylogenetic systematics". From the time of his original formulation until the end of the 1970s, cladistics competed as an analytical and philosophical approach to systematics with phenetics and so-called evolutionary taxonomy. Phenetics was championed at this time by the numerical taxonomists Peter Sneath and Robert Sokal, and evolutionary taxonomy by Ernst Mayr.

Originally conceived, if only in essence, by Willi Hennig in a book published in 1950, cladistics did not flourish until its translation into English in 1966 (Lewin 1997). Today, cladistics is the most popular method for constructing phylogenies from morphological data.

In the 1990s, the development of effective polymerase chain reaction techniques allowed the application of cladistic methods to biochemical and molecular genetic traits of organisms, vastly expanding the amount of data available for phylogenetics. At the same time, cladistics rapidly became popular in evolutionary biology, because computers made it possible to process large quantities of data about organisms and their characteristics.

The cladistic method interprets each character state transformation implied by the distribution of shared character states among taxa (or other terminals) as a potential piece of evidence for grouping.[clarification needed] The outcome of a cladistic analysis is a cladogram – a tree-shaped diagram (dendrogram)[16] that is interpreted to represent the best hypothesis of phylogenetic relationships. Although traditionally such cladograms were generated largely on the basis of morphological characters and originally calculated by hand, genetic sequencing data and computational phylogenetics are now commonly used in phylogenetic analyses, and the parsimony criterion has been abandoned by many phylogeneticists in favor of more "sophisticated" but less parsimonious evolutionary models of character state transformation. Cladists contend that these models are unjustified.[why?]

Every cladogram is based on a particular dataset analyzed with a particular method. Datasets are tables consisting of molecular, morphological, ethological[17] and/or other characters and a list of operational taxonomic units (OTUs), which may be genes, individuals, populations, species, or larger taxa that are presumed to be monophyletic and therefore to form, all together, one large clade; phylogenetic analysis infers the branching pattern within that clade. Different datasets and different methods, not to mention violations of the mentioned assumptions, often result in different cladograms. Only scientific investigation can show which is more likely to be correct.

Until recently, for example, cladograms like the following have generally been accepted as accurate representations of the ancestral relations among turtles, lizards, crocodilians, and birds:[18] 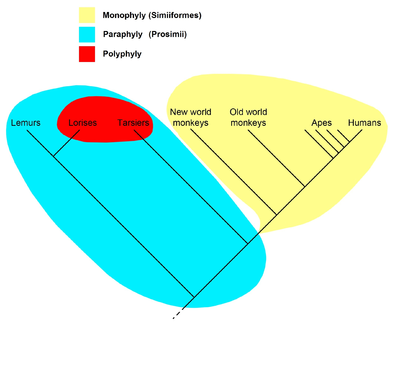 The cladogram to the right represents the current universally accepted hypothesis that all primates, including strepsirrhines like the lemurs and lorises, had a common ancestor all of whose descendants were primates, and so form a clade; the name Primates is therefore recognized for this clade. Within the primates, all anthropoids (monkeys, apes and humans) are hypothesized to have had a common ancestor all of whose descendants were anthropoids, so they form the clade called Anthropoidea. The "prosimians", on the other hand, form a paraphyletic taxon. The name Prosimii is not used in phylogenetic nomenclature, which names only clades; the "prosimians" are instead divided between the clades Strepsirhini and Haplorhini, where the latter contains Tarsiiformes and Anthropoidea.

The following terms, coined by Hennig, are used to identify shared or distinct character states among groups:[20][21][22]

The terms plesiomorphy and apomorphy are relative; their application depends on the position of a group within a tree. For example, when trying to decide whether the tetrapods form a clade, an important question is whether having four limbs is a synapomorphy of the earliest taxa to be included within Tetrapoda: did all the earliest members of the Tetrapoda inherit four limbs from a common ancestor, whereas all other vertebrates did not, or at least not homologously? By contrast, for a group within the tetrapods, such as birds, having four limbs is a plesiomorphy. Using these two terms allows a greater precision in the discussion of homology, in particular allowing clear expression of the hierarchical relationships among different homologous features.

It can be difficult to decide whether a character state is in fact the same and thus can be classified as a synapomorphy, which may identify a monophyletic group, or whether it only appears to be the same and is thus a homoplasy, which cannot identify such a group. There is a danger of circular reasoning: assumptions about the shape of a phylogenetic tree are used to justify decisions about character states, which are then used as evidence for the shape of the tree.[25] Phylogenetics uses various forms of parsimony to decide such questions; the conclusions reached often depend on the dataset and the methods. Such is the nature of empirical science, and for this reason, most cladists refer to their cladograms as hypotheses of relationship. Cladograms that are supported by a large number and variety of different kinds of characters are viewed as more robust than those based on more limited evidence.

Mono-, para- and polyphyletic taxa can be understood based on the shape of the tree (as done above), as well as based on their character states.[21][22][26] These are compared in the table below.

Cladistics, either generally or in specific applications, has been criticized from its beginnings. Decisions as to whether particular character states are homologous, a precondition of their being synapomorphies, have been challenged as involving circular reasoning and subjective judgements.[29] Transformed cladistics arose in the late 1970s in an attempt to resolve some of these problems by removing phylogeny from cladistic analysis, but it has remained unpopular.

However, homology is usually determined from analysis of the results that are evaluated with homology measures, mainly the consistency index (CI) and retention index (RI), which, it has been claimed,[by whom?] makes the process objective. Also, homology can be equated to synapomorphy, which is what Patterson has done.[30]

In organisms with sexual reproduction, incomplete lineage sorting may result in inconsistent phylogenetic trees, depending on which genes are assessed.[31] It is also possible that multiple surviving lineages are generated while interbreeding is still significantly occurring (polytomy). Interbreeding is possible over periods of about 10 million years.[32][33] Typically speciation occurs over only about 1 million years,[34][failed verification] which makes it less likely multiple long surviving lineages developed "simultaneously". Even so, interbreeding can result in a lineage being overwhelmed and absorbed by a related more numerous lineage. Simulation studies[35] suggest that phylogenetic trees are most accurately recovered from data that is morphologically coherent (i.e. where closely related organisms share the highest proportion of characters). This relationships is weaker in data generated under selection, potentially due to convergent evolution.

In disciplines other than biology[edit]

The comparisons used to acquire data on which cladograms can be based are not limited to the field of biology.[37] Any group of individuals or classes that are hypothesized to have a common ancestor, and to which a set of common characteristics may or may not apply, can be compared pairwise. Cladograms can be used to depict the hypothetical descent relationships within groups of items in many different academic realms. The only requirement is that the items have characteristics that can be identified and measured.

Anthropology and archaeology:[38] Cladistic methods have been used to reconstruct the development of cultures or artifacts using groups of cultural traits or artifact features.

Comparative mythology and folktale use cladistic methods to reconstruct the protoversion of many myths. Mythological phylogenies constructed with mythemes clearly support low horizontal transmissions (borrowings), historical (sometimes Palaeolithic) diffusions and punctuated evolution.[39] They also are a powerful way to test hypotheses about cross-cultural relationships among folktales.[40][41]

Historical linguistics:[44] Cladistic methods have been used to reconstruct the phylogeny of languages using linguistic features. This is similar to the traditional comparative method of historical linguistics, but is more explicit in its use of parsimony and allows much faster analysis of large datasets (computational phylogenetics).

Textual criticism or stemmatics:[43][45] Cladistic methods have been used to reconstruct the phylogeny of manuscripts of the same work (and reconstruct the lost original) using distinctive copying errors as apomorphies. This differs from traditional historical-comparative linguistics in enabling the editor to evaluate and place in genetic relationship large groups of manuscripts with large numbers of variants that would be impossible to handle manually. It also enables parsimony analysis of contaminated traditions of transmission that would be impossible to evaluate manually in a reasonable period of time.

Astrophysics[46] infers the history of relationships between galaxies to create branching diagram hypotheses of galaxy diversification.

This audio file was created from a revision of the article "Cladistics" dated 2005-04-30, and does not reflect subsequent edits to the article. (Audio help)
More spoken articles
Retrieved from "https://en.wikipedia.org/w/index.php?title=Cladistics&oldid=962465377"
Categories:
Hidden categories: