From Wikipedia, the free encyclopedia
(Redirected from Coat of Arms of Israel)
Jump to navigation Jump to search
Official insignia of the State of Israel

The Emblem of the State of Israel (Hebrew: סמל מדינת ישראל‎, romanized: Semel Medinat Yisra'el; Arabic: شعار دولة إسرائيل‎, romanized: shiear dawlat 'iisrayiyl) shows a menorah surrounded by an olive branch on each side, and the writing "ישראל" (Hebrew for Israel) below it. Most commonly light blue and white, the coat of arms does appear in different colour combinations depending on the use (see below). 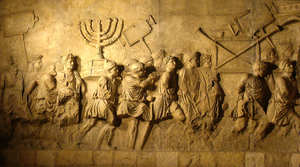 The emblem features a menorah captured by Romans during the First Jewish-Roman War, as depicted on the Arch of Titus.

The State of Israel adopted the symbol after a design competition held in 1948. The design is based on the winning entry submitted by Gabriel and Maxim Shamir's proposal, with elements taken from other submissions, including entries from Oteh Walisch, W. Struski, Itamar David, Yerachmiel Schechter, and Willie Wind, whose entry won the first design competition.[1][2]

The image used on the emblem is based on a depiction of the menorah on the Arch of Titus. The menorah was used in the ancient Temple in Jerusalem and has been a symbol of Judaism since ancient times. It symbolizes universal enlightenment, based on what is written in Isaiah 60: "Nations will come to your light, and kings to the brightness of your dawn".

The emblem may also be based on the vision of the biblical prophet Zechariah, chapter 4, where he describes seeing a menorah flanked by two olive trees, one on each side.[3] Flagettes and banner of the Flag of Israel decorate a house during Israel's Independence Day, 2007.

The olive branches symbolize peace. The symbol is used on coinage.