From Wikipedia, the free encyclopedia
Jump to navigation Jump to search
Biblical character 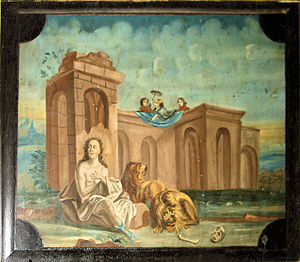 Detail from the church of Lambrechtshagen, Germany, 1759: Daniel in the lions' den with Darius the Mede above.

Darius the Mede is mentioned in the Book of Daniel as king of Babylon between Belshazzar and Cyrus the Great, but he is not known to history, and no additional king can be placed between the known figures of Belshazzar and Cyrus.[1] Most scholars view him as a literary fiction, but some have tried to harmonise the Book of Daniel with history by identifying him with various known figures, notably Cyrus or Gobryas, the general who was first to enter Babylon when it fell to the Persians in 539 BCE.[2]

Darius the Mede is first mentioned in the story of Belshazzar's feast (Daniel 5). Belshazzar, king of Babylon, holds a great feast, during which a hand appears and writes on the wall: "MENE, MENE, TEKEL, and PARSIN" (מנא מנא תקל ופרסין). Daniel interprets the words: Belshazzar has been weighed and found wanting, and his kingdom is to be divided between the Medes and Persians. The story concludes: "That very night Belshazzar the Chaldean (Babylonian) king was killed, and Darius the Mede received the kingdom."[3]

In the story of Daniel in the lions' den (Daniel 6), Daniel has continued to serve at the royal court under Darius, and has been raised to high office. His jealous rivals plot his downfall, tricking Darius into issuing a decree that no prayers should be addressed to any god or man but to Darius himself, on pain of death. Daniel continues to pray to the God of Israel, and Darius, although deeply distressed, must condemn him to be thrown into the lions' den because the edicts of the Medes and Persians cannot be altered. At daybreak the king hurries to the place and Daniel tells him that his God sent an angel to save him. Darius commands that those who had conspired against Daniel should be thrown to the lions in his place, along with their wives and children.[4]

The final appearance of Darius is in Daniel 9, which presents a vision of Daniel relating to the end-time travails and triumph of the Israelites over their enemies. The mention of Darius is used as a chronological marker, placing the vision in "the first year of Darius son of Ahasuerus".[5] 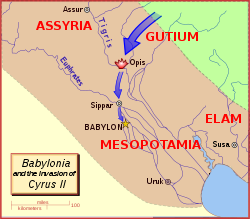 The Persian invasion of Babylonia, September–October 539 BC, showing Gutium, Opis, and Babylon.

Medes and the fall of Babylon[edit]

The Medes came to prominence in 612 BCE when they joined with the Babylonians in overthrowing Assyria. Little is known about them, but they were possibly a significant power in the Middle East for several decades thereafter. The fall of their empire is recorded in a Babylonian inscription from around 553 BCE (a second report puts the event in 550 BCE) reporting that the Median king has been conquered by "Cyrus, king of Anshan," in south-western Iran: this is the first appearance of Cyrus in the historical record, and the beginning of the rapid rise of the Persians.

After extending his empire from the Mediterranean to Central Asia, Cyrus turned his attention to Babylonia. The most important ancient sources for his conquest of Babylon are the Nabonidus Chronicle (Nabonidus was the last Babylonian king, and Belshazzar, who is described as king of Babylon in the Book of Daniel, was his son and crown prince), the Cyrus Cylinder, and the Verse Account of Nabonidus—which, despite its name, was commissioned by Cyrus.[6]

Cyrus' Babylonian campaign began in 539 BCE, although there were presumably previous tensions. On 10 October Cyrus won a battle at Opis, opening the way to Babylon, and on 12 October "Ugbaru, governor of the district of Gutium, and the army of Cyrus entered Babylon without a battle" (Babylonian Chronicle). Ugbaru is presumably the same person as the Gorbyras mentioned by the Greek historian Xenophon, a Babylonian provincial governor who switched to the Persian side. Cyrus made his entrance into the city a few days later; Nabonidus was captured and his life spared, but nothing is known of the fate of Belshazzar.[7]

The Book of Daniel is not regarded by scholars as a reliable guide to history.[8] The broad consensus is that Daniel never existed, and that the author appears to have taken the name from a legendary hero of the distant past mentioned in the Book of Ezekiel.[9][10] The book that bears his name is an apocalypse, not a book of prophecy, and its contents form a cryptic allusion to the persecution of the Jews by the Syrian king Antiochus IV Epiphanes (reigned 175–164 BCE).[11][12] There is broad agreement that the stories making up chapters 1–6 are legendary in character, and that the visions of chapters 7–12 were added during the persecution of Antiochus, the book itself being completed soon after 164 BCE.[13]

Daniel 5 and Daniel 6 belong to the folktales making up the first half of the book.[14] The language of Daniel 5 ("Belshazzar's Feast"), for example, follows ancient Near Eastern conventions which are in some cases precisely those used in Daniel.[15] Daniel 6 ("Daniel in the Lions' Den") is based on the classic Babylonian folk-tale Ludlul-bel-nemeqi, telling of a courtier who suffers disgrace at the hands of evil enemies but is eventually restored due to the intervention of a kindly god (in the story in Daniel, this is the God of Israel): in the Babylonian original the "pit of lions" is a metaphor for human adversaries at court, but the biblical tale has turned the metaphorical lions into real animals.[16]

In Daniel 9, Daniel, pondering the meaning of Jeremiah's prediction that Jerusalem would remain desolate for seventy years, is told by the angel Gabriel that the 70 years should be taken to mean seventy weeks (literally "sevens") of years.[17] Verse 1 sets the time of Daniel's vision as the "first year of Darius son of Ahasuerus, by birth a Mede",[18] but no Darius is known to history, nor can any king of Babylon be placed between the genuine historical figures of Belshazzar and Cyrus.[1] 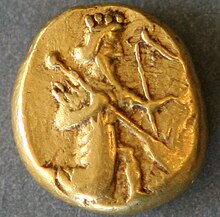 H. H. Rowley's 1935 study of the question (Darius the Mede and the Four World Empires of Darius the Mede, 1935) has shown that Darius the Mede cannot be identified with any king,[19] and he is generally seen today as a literary fiction combining the historical Persian king Darius I and the words of Jeremiah 51:11 that God "stirred up" the Medes against Babylon.[2] Nevertheless, numerous attempts have been made to identify him with historical figures, with the following being perhaps the best-known candidates:[19]