From Wikipedia, the free encyclopedia
Jump to navigation Jump to search
This article is about the Western Christian practice. For East Syrian season of Epiphany, see Denha.

The Adoration of the Magi by Edward Burne-Jones (1904)

The Epiphany season, also known as Epiphanytide, is in some churches recognized as a liturgical period following the Christmas season (Christmastide). It begins on the day of Epiphany, and ends at various points as defined by those churches.

In Advent 2000, the Church of England introduced into its liturgy an optional Epiphany season by approving the Common Worship series of services as an alternative to those in the Book of Common Prayer, defining Epiphanytide as lasting from the feast of the Epiphany to Candlemas.

An official publication of the Church of England states: "The Christmas season is often celebrated for twelve days, ending with the Epiphany. Contemporary use has sought to express an alternative tradition, in which Christmas lasts for a full forty days, ending with the Feast of the Presentation on February 2."[1] It presents the latter part of this period as the Epiphany season, comprising the Sundays of Epiphany and ending "only with the Feast of the Presentation (Candlemas)".[2]

The Church of England's optional Epiphany season thus begins at Evening Prayer on the Eve of the Epiphany (which may be celebrated on January 6 or the Sunday between January 2 and 8) and ends at Evening Prayer (or Night Prayer) on the Feast of the Presentation (which may be celebrated on 2 February or on the Sunday between January 28 and February 3). The Epiphany season is seen as in some sense a continuation of the Christmas season, and together they last forty days. The three main events focused on during the Epiphany season are the visit of the Magi, the baptism of Jesus, and Jesus' miracle at the marriage at Cana. The visit of the Magi is traditionally interpreted as symbolic of God's revelation of himself to the Gentiles, and so one of the themes of the season is mission. The Week of Prayer for Christian Unity also falls within the season, allowing another seasonal theme to be that of unity. The season culminates at the Feast of the Presentation, after which the liturgy stops looking back to Christmas and begins looking forward to the Passion. The colour for the season is white. 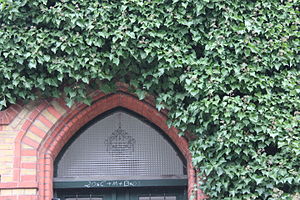 The Epiphanytide tradition of chalking the door involves writing C+M+B (representing the names of the Three Wise Men as well as the Christian prayer Christus mansionem benedicat) on one's door, as seen here on the gate of Villa Reepschlägerbahn in Germany.

Several Protestant churches celebrate an Epiphany season that lasts until the day before Ash Wednesday, which marks the beginning of the season of Lent.[3] As such, in some adaptations of the Revised Common Lectionary, such as those used by Methodists and Lutherans, the Epiphanytide begins on 6 January, and continues until the day before Ash Wednesday (which begins Lent). The last Sunday of Epiphany is Transfiguration Sunday.

The Evangelical Lutheran Church in America used the terms "Time after Epiphany" to describe this period.[7] The expression with "after" has been interpreted as making the period in question correspond to that of Ordinary Time.[8][9]

The Presbyterian Church (U.S.A.) states that neither Epiphany nor Pentecost are seasons, and that it is a misunderstanding to imagine that expressions such as "Fifth Sunday after Epiphany" indicate the existence of such a time as "Epiphany season". These expression merely indicate the passing of time, not the character of the period, for neither the period after Epiphany nor that after Pentecost focus on a dominant event or theme. The correct term, it says, is therefore "Ordinary Time".[10]

The calendar of the Personal Ordinariate of the Chair of Saint Peter and the Personal Ordinariate of Our Lady of Walsingham within the Roman Catholic Church (which uses Ordinariate Use liturgy) celebrates Epiphanytide or the Time After Epiphany from "Monday of Week 1 on the day following the [Feast of the] Baptism of the Lord" until the liturgical start of Ash Wednesday; during Epiphanytide, Candlemas is highlighted as a "Feast of the Lord".[11]

Within the Latin Rite of the Roman Catholic Church, until 1955, the feast of the Epiphany had an octave, and was thus celebrated from 6 until 13 January. After Pope Pius XII removed this octave, the liturgy of those days continued to use the same texts as previously, thus giving to the period until the Feast of the Baptism of the Lord, which replaced the Octave Day of the Epiphany, a special character that was still recognized by the 1960 Code of Rubrics. This defined the season of Christmas as extending from First Vespers of Christmas to 13 January inclusive, and divided this season into Christmastide, ending just before First Vespers of the Epiphany, and Epiphany (not Epiphanytide and, as is obvious, no longer the Octave of the Epiphany) from then until 13 January inclusive (one week).[12] The 1969 revision preserved the arrangement by which the Epiphany is part of the Christmas season, during which the liturgical colour is white, and which now lasts only until the feast of the Baptism of the Lord. This latter feast is now usually celebrated on the Sunday after 6 January, and not later than 13 January. The season immediately following the Octave Day of the Epiphany (until 1954), or the Feast of the Baptism of the Lord (since 1955), and in which the liturgical colour is green, was for the first time given a name in the 1960 Code of Rubrics, which in Latin called it the season per annum.[12] The official English translation of the Roman Missal calls it Ordinary Time.[13] This season begins on 14 January. Until 1969, it ran from that date to just before First Vespers of Septuagesima Sunday, but since 1970 to just before Ash Wednesday. However, the Encyclopedia of Catholic Devotions and Practices, which has received the imprimatur of John Michael D'Arcy, refers to this period as Epiphanytide, stating that "The Epiphany season extends from January 6 to Septuagesima Sunday, and has from one to six Sundays, according to the date of Easter. White is the color for the octave; green is the liturgical color for the season."[14]