From Wikipedia, the free encyclopedia
Jump to navigation Jump to search
For other uses, see Erato (mythology), Erato Records, and Erato (disambiguation). 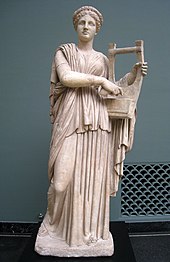 In Greek mythology, Erato (/ˈɛrətoʊ/; Ancient Greek: Ἐρατώ) is one of the Greek Muses. The name would mean "desired" or "lovely", if derived from the same root as Eros, as Apollonius of Rhodes playfully suggested in the invocation to Erato that begins Book III of his Argonautica.[1]

Erato is the Muse of love poetry. In the Orphic hymn to the Muses, it is Erato who charms the sight. Since the Renaissance she has mostly been shown with a wreath of myrtle and roses, holding a lyre, or a small kithara, a musical instrument often associated with Apollo.[2] In Simon Vouet's representations, two turtle-doves are eating seeds at her feet. Other representations may show her holding a golden arrow, reminding one of the "eros", the feeling that she inspires in everybody, and at times she is accompanied by the god Eros, holding a torch.

Erato was named with the other muses in Hesiod's Theogony. She was also invoked at the beginning of a lost poem, Rhadine (Ῥαδινή), that was referred to and briefly quoted by Strabo.[3] The love story of Rhadine made her supposed tomb on the island of Samos a pilgrimage site for star-crossed lovers in the time of Pausanias[4] and Erato was linked again with love in Plato's Phaedrus;[5] nevertheless, even in the third century BC, when Apollonius wrote, the Muses were not yet as inextricably linked to specific types of poetry as they became.[6]

Erato is also invoked at the start of book 7 of Virgil's Aeneid, which marks the beginning of the second half or "Iliadic" section of the poem.