From Wikipedia, the free encyclopedia
Jump to navigation Jump to search
For the physician of King Juba II of Numidia, after whom the Euphorbia plants were named, see Euphorbus (physician). 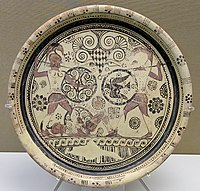 Menelaus and Hector fighting over the body of Euphorbus, on the Euphorbos plate, from Rhodes, Middle Wild Goat style, c. 600 BC, British Museum.

In Greek mythology, Euphorbus (Ancient Greek: Εὔφορβος; or Euforbo) was a Trojan hero during the Trojan War.

Euphorbus was a handsome man described to have the loveliest locks among the curly-haired. He had a lot of gold bound into his braid of hair along with other ornaments around his head.[1]

Euphorbus was the son of Panthous and Phrontis according to Homer[2] and thus brother to Polydamas and Hyperenor. But according to Orpheus, his parents were the naiad Abarbarea and Boucolides, illegitimate son of Laomedon,[3] and probably the brother of the twins Aesepus and Pedasus.

Euphorbus wounded Patroclus before the Achaean hero was killed by Hector[4] or according to Tzetzes, he was the second to strike Patroclus for the god Apollo was the first one.[5] In the fight for Patroclus' body, Euphorbus was killed by Menelaus.[6] He was apparently one of Troy's finest warriors. Menelaus later took Euphorbus' shield to the temple of Hera in Argos. There are some accounts that claim that it was Euphorbus, not Aeneas, Cycnus or Hector, that killed Protesilaus.