From Wikipedia, the free encyclopedia
Jump to navigation Jump to search
This article is about the defunct Turkish airline. For the Bulgarian aircraft manufacturer, see Fly Air Limited.

Fly Air (Turkish: Fly Havayolu Taşımacılık A.Ş.) was a private airline based in Istanbul, Turkey. It was originally a charter airline, but also operated scheduled services.

The airline ceased operations in January 2007.[1] 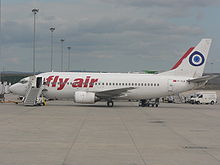 The airline was established and started operations in 2002 with holiday charter flights and added scheduled services in October 2003.[1] It was launched on the back of charter carrier Air Anatolia. Fly Air was the first charter airline in Turkey with domestic flights. The first domestic flight gained a lot of media coverage as the monopoly of Turkish Airlines was broken. Fly Air ceased operations after financial problems in 2007.

Fly Air operated the following services until it ceased operations: