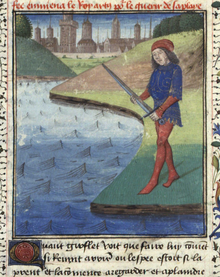 Griflet /ˈɡrɪflɪt/, also called Gi(r)flet or Jaufré, is a Knight of the Round Table in Arthurian legend. He is the eponymous protagonist of Jaufre.

Coat of arms attributed to Girflet

Like many another character in Arthurian Romance, his origins lie in Welsh mythology - in this instance in the minor deity Gilfaethwy fab Dôn, who features in Math fab Mathonwy, fourth of the Four Branches of the Mabinogi.[1] He is the hero of his own, early romance: Jaufre, the only surviving Arthurian romance written in Provençal.[2]

In French prose chivalric romance cycles, Griflet first appears as a squire and one of King Arthur's earliest allies. He is called the son of Do or Don, and is a cousin to Lucan and Bedivere.[3][2] When he is knighted, he becomes one of the first Knights of the Round Table.[4] Griflet is one of Arthur's chief advisors throughout his career. According to the Lancelot-Grail Cycle, he was one of the few survivors of Arthur's final battle and was asked by the dying king to return his sword Excalibur to the Lady of the Lake.

In Thomas Malory's Le Morte d'Arthur, Sir Griflet is one of the knights killed defending Guinevere's execution when the queen is rescued by Lancelot. Malory follows the Stanzaic Morte Arthure, making Griflet's cousin Bedivere the knight who casts away Excalibur.