From Wikipedia, the free encyclopedia
Jump to navigation Jump to search
For the prophetic book, see Book of Hosea. For plant Hosea lobbii, see Hosea (plant).
See also Hoshea, who has the same name in Biblical Hebrew. 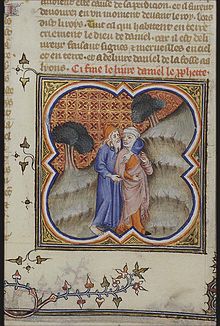 Illustration of Hosea and Gomer from the Bible Historiale, 1372

In the Hebrew Bible, Hosea (/ˌhoʊˈziːə/ or /hoʊˈzeɪə/; Hebrew: הוֹשֵׁעַ – Hōšēaʿ, 'Salvation'; Greek: Ὡσηέ – Hōsēé), son of Beeri, was an 8th-century BC prophet in Israel who authored the book of prophecies bearing his name. He is one of the Twelve Prophets of the Jewish Hebrew Bible, also known as the Minor Prophets of the Christian Old Testament.[1] Hosea is often seen as a "prophet of doom", but underneath his message of destruction is a promise of restoration. The Talmud claims that he was the greatest prophet of his generation.[2] The period of Hosea's ministry extended to some sixty years, and he was the only prophet of Israel of his time who left any written prophecy.

The name Hosea, meaning 'salvation', or 'He saves', or 'He helps', seems to have been not uncommon, being derived from the auspicious verb from which we have the frequently recurring word salvation. It may be a contraction of a larger form of which the divine name (YHWH) or its abbreviation formed a part, so as to signify "YHWH helps". According to the Bible Numbers 13:8, 13:16 that was the original name of Joshua, son of Nun, until Moses gave him the longer, theophoric name Yehoshua, "YHWH is salvation".[citation needed]

Although it is not expressly stated in the Book of Hosea, it is apparent from the level of detail and familiarity focused on northern geography, that Hosea conducted his prophetic ministries in the Northern Israel (Samaria) of which he was a native.[3] In Hosea 5:8 ff., there seems to be a reference to the Syro-Ephraimite War which led to the capture of the kingdom by the Assyrians (c. 734–732 BC). Hosea’s long ministry (ca. 750–725) seems to have ended before the fall of Samaria in 722/721.[4]

Little is known about the life or social status of Hosea. According to the Book of Hosea, he married Gomer, the daughter of Diblaim,[1] but she proved to be unfaithful. Hosea knew she would be unfaithful, as God says this to him immediately in the opening statements of the book. This marriage was arranged in order to serve to the prophet as a symbol of Israel's unfaithfulness to the Lord.[3] His marriage will dramatize the breakdown in the relationship between God and His people Israel.[5] Hosea's family life reflected the "adulterous" relationship which Israel had built with polytheistic gods.

One of the early writing prophets, Hosea used his own experience as a symbolic representation of God and Israel. The relationship between Hosea and Gomer parallels the relationship between God and Israel. Even though Gomer runs away from Hosea and sleeps with another man, he loves her anyway and forgives her. Likewise, even though the people of Israel worshipped false gods, God continued to love them and did not abandon his covenant with them.[4]

The Book of Hosea was a severe warning to the northern kingdom against the growing idolatry being practiced there; the book was a dramatic call to repentance. Christians extend the analogy of Hosea to Christ and the church: Christ the husband, his church the bride. Christians see in this book a comparable call to the church not to forsake the Lord Jesus Christ. Christians also take the buying back of Gomer as the redemptive qualities of Jesus Christ's sacrifice on the cross.

Other preachers, like Charles Spurgeon, saw Hosea as a striking presentation of the mercy of God in his sermon on Hosea 1:7 titled The LORD's Own Salvation. “But I will have mercy upon the house of Judah, and will save them by the Lord their God, and will not save them by bow, nor by sword, nor by battle, by horses, nor by horsemen.” – Hosea 1:7 in his sermon NO. 2057, December 16, 1888.

The Qur'an mentions only some prophets by name but makes it clear that many were sent who are not mentioned.[6] Therefore, many Muslim scholars, such as Ibn Ishaq, speak of Hosea as one of the true Hebrew prophets of Israel. The Book of Hosea has also been used in Qur'anic exegesis by Abdullah Yusuf Ali, especially in reference to Qur'anic verses which speak of the backsliding of Israel.[7] 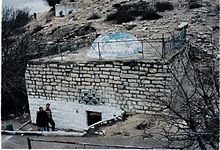 Jewish tradition holds that the tomb of Hosea is a structure located in the Jewish cemetery of Safed;[8] however, Emil G. Hirsch and Victor Ryssel, writing in the Jewish Encyclopedia, say that this tradition is "historically worthless".[3]