From Wikipedia, the free encyclopedia
Jump to navigation Jump to search
Romance languages developed on the Iberian Peninsula

The Iberian Romance, Ibero-Romance or simply Iberian languages,[4] is an areal grouping of Romance languages that developed on the Iberian Peninsula, an area consisting primarily of Spain, Portugal, Gibraltar and Andorra, and in southern France which are today more commonly separated into West Iberian and Occitano-Romance language groups.

Evolved from the Vulgar Latin of Iberia, the most widely spoken Iberian Romance languages are Spanish, Portuguese, Catalan-Valencian-Balear and Galician.[5] These languages also have their own regional and local varieties. Based on mutual intelligibility, Dalby counts seven "outer" languages, or language groups: Galician-Portuguese, Spanish, Astur-Leonese, "Wider"-Aragonese, "Wider"-Catalan, Provençal+Lengadocian, and "Wider"-Gascon.[6]

Linguistic map of southwestern Europe
See also: History of the Spanish language, History of Portuguese, and History of Catalan

Like all Romance languages,[7] the Iberian Romance languages descend from Vulgar Latin, the nonstandard (in contrast to Classical Latin) form of the Latin language spoken by soldiers and merchants throughout the Roman Empire. With the expansion of the empire, Vulgar Latin came to be spoken by inhabitants of the various Roman-controlled territories. Latin and its descendants have been spoken in Iberia since the Punic Wars, when the Romans conquered the territory[8] (see Roman conquest of Hispania).

The modern Iberian Romance languages were formed roughly through the following process:

This list points to common traits of these Iberian subsets, especially when compared to the other Romance languages in general. Thus, changes such as Catalan vuit and Portuguese oito vs. Spanish ocho are not shown here, as the change -it- > -ch- is exclusive to Spanish among the Romance languages.

Between Portuguese, Spanish and Catalan[edit]

Between Spanish and Catalan, but not Portuguese[edit]

Between Spanish and Portuguese, but not Catalan[edit]

Between Portuguese and Catalan, but not Spanish[edit]

Additionally, the Asturian language, although not an official language,[23] is recognised by the autonomous community of Asturias. It is one of the Astur-Leonese languages with Mirandese, which in Portugal has official status as minority language.[24]

Ibero-Romance languages around the world 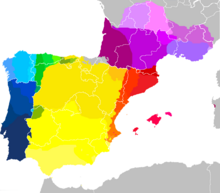 The Iberian Romance languages are a conventional group of Romance languages. Many authors use the term in a geographical sense although they are not necessarily a phylogenetic group (the languages grouped as Iberian Romance may not all directly descend from a common ancestor). Phylogenetically, there is disagreement about what languages should be considered within the Iberian Romance group; for example, some authors consider that East Iberian, also called Occitano-Romance, could be more closely related to languages of northern Italy (or also Franco-Provençal, the langues d'oïl and Rhaeto-Romance). A common conventional geographical grouping is the following: