From Wikipedia, the free encyclopedia
(Redirected from Intramuscular)
Jump to navigation Jump to search 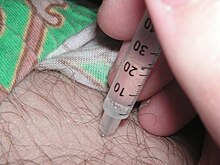 Intramuscular injection into the leg

Intramuscular injection, often abbreviated IM, is the injection of a substance directly into muscle. In medicine, it is one of several methods for parenteral administration of medications (see route of administration). Muscles have larger and more numerous blood vessels than subcutaneous tissue; intramuscular injections usually have faster rates of absorption than subcutaneous or intradermal injections.[1] The volume of injection is limited to 2-5 milliliters, depending on injection site.

Examples of medications that are sometimes administered intramuscularly are:

In addition, some vaccines are administered intramuscularly:

The deltoid muscle site (upper arm) is recommended for use with injections of small volume, usually equal or less than 2 ml, including vaccinations.[2] This site is not recommended for repeated injections; due to its small area, it is difficult to rotate the injection site.[2] To locate the site, palpate the lower edge of the acromion process. Inject in the upside down triangle that forms with its base at the acromion process and its midpoint in line with the axilla.[1] 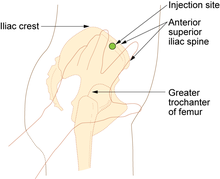 The ventrogluteal site (hip) is recommended for injections requiring a larger volume to be administered, greater than 1 ml, and for medications known to be irritating, viscous or oily. It is also given for narcotic, antibiotic, sedative and anti-emetic medications.[2] To locate the ventrogluteal site, place the palm of your hand over the greater trochanter, with the fingers facing the patient's head. The right hand is used for the left hip and left hand is used for the right hip. Place the index finger on the anterior superior iliac spine and run the middle finger back along the iliac crest. The injection is given in the center of the triangle that is formed.[1] 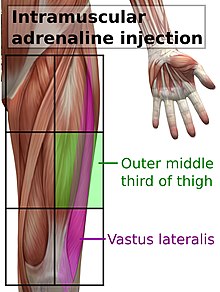 The vastus lateralis site is recommended for infants less than 7 months old and those unable to walk, with loss of muscular tone.[2] To locate the site, divide the front thigh into thirds vertically and horizontally to make nine squares and inject in the outer middle square.[1]

It is also recommended for epinephrine autoinjectors, in such cases in the middle of the outer side of the thigh, corresponding to the location of the vastus lateralis muscle.[3]

The dorsogluteal (buttock) site is not recommended for use in any patient population due to its location near major blood vessels and nerves, as well as having inconsistent depth of adipose tissue, with very few injections in this area injected to the correct depth to administer as a true intramuscular injection.[2][4] Use of this site is associated with skin and tissue trauma, muscle fibrosis and contracture, haematoma, nerve palsy and paralysis, as well as infectious processes such as abscess and gangrene.[2] Despite the goal of healthcare in many countries to follow evidence based practices, this site is commonly preferred by healthcare professionals against research recommendation, often due to a lack of knowledge surrounding alternative sites for injection.[5] The injection site is located by dividing the buttock into four with a plus (+) shaped cross, and administering the injection in the upper outer quadrant. This is the only intramuscular injection site for which research recommends aspiration (drawing back) of the syringe prior to injection, due to higher likelihood of accidental intravenous administration in this area.[2] However, aspiration is not recommended by the Centers for Disease Control and Prevention, considering it outdated.[6]

The selected site is cleansed with an antimicrobial and is allowed to dry. It is injected with the dominant hand using a quick, darting motion perpendicular to the patient's body at an angle between 72 and 90 degrees, as a faster injection is less painful. The needle is then stabilized with the non-dominant hand while the dominant hand slides to the plunger to slowly instill the medication, as a rapid injection causes more discomfort. The CDC does not recommend the outdated practice of aspirating for blood to rule out injecting into a blood vessel. The needle is withdrawn at the same angle inserted. Using the "Z track" or zigzag technique is recommended, where the skin is pulled and held down to one side with the non-dominant hand about an inch and after the needle is withdrawn the displaced skin is allowed to return to its normal position. This is to ensure that the medication does not leak back along the needle track. Gentle pressure is applied with a gauze but the site is not massaged to prevent forcing the medication into subcutaneous tissue.[6]