From Wikipedia, the free encyclopedia
Jump to navigation Jump to search
Ladder leading to heaven, dreamed by Jacob
For other uses, see Jacob's Ladder (disambiguation).
"Ladder to Heaven" redirects here. For the South Park episode, see A Ladder to Heaven. 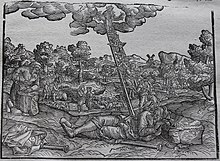 Jacob's Ladder (Hebrew: סולם יעקב Sulam Yaakov) is a ladder leading to heaven that was featured in a dream the biblical Patriarch Jacob had during his flight from his brother Esau in the Book of Genesis.

The significance of the dream has been debated, but most interpretations agree that it identified Jacob with the obligations and inheritance of the people chosen by God, as understood in Abrahamic religions. 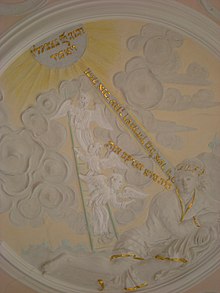 Jacob's Ladder as depicted in Monheim Town Hall. The gilded Hebrew text reads "And, behold, the LORD stood beside him, and said: 'And, behold, I am with thee, and will keep thee whithersoever thou goest'" Jacob exclaims, "How full of awe is this place!"

The description of Jacob's ladder appears in Genesis 28:10–19:

And Jacob went out from Beer-sheba, and went toward Haran. And he lighted upon the place, and tarried there all night, because the sun was set; and he took one of the stones of the place, and put it under his head, and lay down in that place to sleep. And he dreamed, and behold a ladder set up on the earth, and the top of it reached to heaven; and behold the angels of God ascending and descending on it. And, behold, the LORD stood beside him, and said: "I am the LORD, the God of Abraham thy father, and the God of Isaac. The land whereon thou liest, to thee will I give it, and to thy seed. And thy seed shall be as the dust of the earth, and thou shalt spread abroad to the west, and to the east, and to the north, and to the south. And in thee and in thy seed shall all the families of the earth be blessed. And, behold, I am with thee, and will keep thee whithersoever thou goest, and will bring thee back into this land; for I will not leave thee, until I have done that which I have spoken to thee of." And Jacob awaked out of his sleep, and he said: "Surely the LORD is in this place; and I knew it not." And he was afraid, and said: "How full of awe is this place! this is none other than the house of God, and this is the gate of heaven." 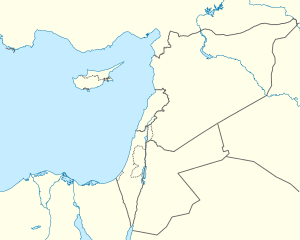 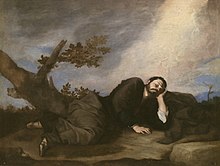 The classic Torah commentaries offer several interpretations of Jacob's ladder. According to the Midrash Genesis Rabbah, the ladder signified the exiles which the Jewish people would suffer before the coming of the Jewish messiah. First the angel representing the 70-year exile of Babylonia climbed "up" 70 rungs, and then fell "down". Then the angel representing the exile of Persia went up a number of steps, and fell, as did the angel representing the exile of Greece. Only the fourth angel, which represented the final exile of Rome/Edom (whose guardian angel was Esau himself), kept climbing higher and higher into the clouds. Jacob feared that his children would never be free of Esau's domination, but God assured him that at the End of Days, Edom too would come falling down.[1]

Yet another interpretation is this: The place at which Jacob stopped for the night was in reality Mount Moriah, the future home of the Temple in Jerusalem.[2] The ladder therefore signifies the "bridge" between Heaven and earth, as prayers and sacrifices offered in the Holy Temple soldered a connection between God and the Jewish people. Moreover, the ladder alludes to the giving of the Torah as another connection between heaven and earth. In this interpretation, it is also significant that the Hebrew word for ladder, sulam (סלם) and the name for the mountain on which the Torah was given, Sinai (סיני) have the same gematria (numerical value of the letters).

The Hellenistic Jewish philosopher Philo, born in Alexandria, (d. ca. 50 CE) presents his allegorical interpretation of the ladder in the first book of his De somniis. There he gives four interpretations, which are not mutually exclusive:[3]

A hilltop overlooking the Israeli settlement of Beit El north of Jerusalem that is believed by some to be the site of Jacob's dream is a tourist destination during the holiday of Sukkot.[4] 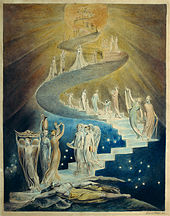 Jesus said in John 1:51 "And he saith unto him, Verily, verily, I say unto you, Hereafter ye shall see heaven open, and the angels of God ascending and descending upon the Son of man." This statement has been interpreted as associating or implicating Jesus with the mythical ladder, in that Christ bridges the gap between Heaven and Earth. Jesus presents himself as the reality to which the ladder points; as Jacob saw in a dream the reunion of Heaven and Earth, Jesus brought this reunion, metaphorically the ladder, into reality. Adam Clarke, an early 19th-century Methodist theologian and Bible scholar, elaborates:

That by the angels of God ascending and descending, is to be understood, that a perpetual intercourse should now be opened between heaven and earth, through the medium of Christ, who was God manifested in the flesh. Our blessed Lord is represented in his mediatorial capacity as the ambassador of God to men; and the angels ascending and descending upon the Son of Man, is a metaphor taken from the custom of dispatching couriers or messengers from the prince to his ambassador in a foreign court, and from the ambassador back to the prince.[6]

The theme of a ladder to heaven is often used by the Church Fathers. Irenaeus in the second century describes the Christian Church as the "ladder of ascent to God".[7]

In the third century, Origen[8] explains that there are two ladders in the life of a Christian, the ascetic ladder that the soul climbs on the earth, by way of—and resulting in—an increase in virtue, and the soul's travel after death, climbing up the heavens towards the light of God.

In the fourth century, Gregory of Nazianzus[9] speaks of ascending Jacob's Ladder by successive steps towards excellence, interpreting the ladder as an ascetic path, while Saint Gregory of Nyssa narrates[10] that Moses climbed on Jacob's Ladder to reach the heavens where he entered the tabernacle not made with hands, thus giving the Ladder a clear mystical meaning. The ascetic interpretation is found also in Saint John Chrysostom, who writes:

And so mounting as it were by steps, let us get to heaven by a Jacob’s ladder. For the ladder seems to me to signify in a riddle by that vision the gradual ascent by means of virtue, by which it is possible for us to ascend from earth to heaven, not using material steps, but improvement and correction of manners.[11]

Jacob's Ladder as an analogy for the spiritual ascetic of life enjoyed wide influence thanks to the classical work The Ladder of Divine Ascent by John Climacus.

In Islam, Jacob (Arabic: يَعْقُوب‎, romanized: Yaʿqūb) is revered in Islam as a prophet and patriarch. Muslim scholars drew a parallel with Jacob's vision of the ladder[12] and Muhammad's event of the Mi'raj.[13] The ladder of Jacob was interpreted by Muslims to be one of the many symbols of God, and many saw Jacob's ladder as representing in its form the essence of Islam, which emphasizes following the "straight path". The twentieth-century scholar Martin Lings described the significance of the ladder in the Islamic mystic perspective:

The ladder of the created Universe is the ladder which appeared in a dream to Jacob, who saw it stretching from Heaven to earth, with Angels going up and down upon it; and it is also the "straight path", for indeed the way of religion is none other than the way of creation itself retraced from its end back to its Beginning.[14]

The narrative of Jacob's Ladder was used, shortly after the destruction of the Second Temple in the Siege of Jerusalem (70 CE), as basis for the pseudepigraphic Ladder of Jacob. This writing, preserved only in Old Church Slavonic, interprets the experience of Patriarchs in the context of Merkabah mysticism.

The angels climb Jacob's Ladder on the west front of Bath Abbey.

Jacob's Ladder has been depicted in many artworks, the largest of which is the facade of Bath Abbey in England where sculptures depict angels climbing up and down ladders on either side of the main window on the west front.