Jean Paul Gaultier[a] (French: [ʒɑ̃ pɔl ɡotje]; born 24 April 1952)[1] is a French haute couture and prêt-à-porter fashion designer. He is described as an "enfant terrible" of the fashion industry, and is known for his unconventional designs with motifs including corsets, marinières, and tin cans. Gaultier founded his eponymous fashion label in 1982, and expanded with a line of fragrances in 1993. Gaultier was the creative director for French luxury house Hermès from 2003–2010. He retired following his 50th-anniversary haute couture show during Paris Fashion Week in January 2020.[3]

Aside from his work in the fashion industry, Gaultier co-presented the first seven series of the television series Eurotrash with Antoine de Caunes from 1993–1997.

Gaultier grew up in a suburb of Paris. His mother was a clerk and his father an accountant. It was his maternal grandmother, Marie Garage, who introduced him to the world of fashion.[4] He never received formal training as a designer. Instead, he began to send sketches to famous couture stylists at an early age. Pierre Cardin was impressed by his talent and hired him as an assistant in 1970.[5] Then he worked with Jacques Esterel in 1971 and Jean Patou later that year again worked for Cardin managing the Pierre Cardin boutique in Manila for a year until 1974.[4]

His first individual collection was released in 1976,[5] and his characteristic irreverent style dating from 1981 has led to his being known as the enfant terrible of French fashion. Many of Gaultier's subsequent collections have been based on street wear, focusing on popular culture, whereas others, particularly his haute couture collections, are very formal, yet at the same time unusual and playful.[6]

Although most people found his designs decadent at the time, fashion editors, notably Melka Tréanton of Elle, Claude Brouet and Catherine Lardeur of French Marie Claire, were impressed by his creativity and mastery of tailoring, and later launched his career.[7][8][9][10][11]

In 1985, he introduced man-skirts and promoted their use, especially kilts,[12] in men's wardrobe, and the release of designer collections.[5] Gaultier has also worked in close collaboration with Wolford Hosiery.[13][14]

Gaultier caused shock by using unconventional models for his exhibitions, like older men and full-figured women, pierced and heavily tattooed models, and by playing with traditional gender roles in the shows. This earned him both criticism and enormous popularity.[5]

At the end of the 1980s, Gaultier suffered some personal losses, and in 1990 his boyfriend and business partner, Francis Menuge, died of AIDS-related causes.[12]

In 1988 Gaultier released a dance single titled "How To Do That" on Fontana Records, from which came one of the first ever "single title" remix albums, Aow Tou Dou Zat, on Mercury Records.[15] The album includes mixes by Norman Cook, J. J. Jeczalik, George Shilling, Mark Saunders, Latin Rascals, David Dorrell, Tim Atkins, Carl Atkins, and Kurtis Mantronik. It was co-written and produced by Tony Mansfield, and video directed by Jean-Baptiste Mondino.[16] The album also featured a collaboration with accordion player Yvette Horner.

Starting in 1993, he co-hosted the Channel 4 programme Eurotrash with Antoine de Caunes. Gaultier hosted the show until 1997.[17] 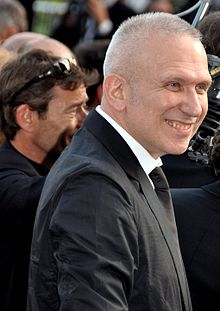 Gaultier at the 2011 Cannes Film Festival

He is also well known for sponsoring the 2003–04 exhibit in the Costume Institute of New York's Metropolitan Museum of Art entitled "Braveheart: Men in Skirts," which showed designs by Dries van Noten, Vivienne Westwood, and Rudi Gernreich in addition to Gaultier's in order to examine "designers and individuals who have appropriated the skirt as a means of injecting novelty into male fashion, as a means of transgressing moral and social codes, and as a means of redefining an ideal masculinity."[20][21]

He designed some furniture for the French furniture brand Roche Bobois.[22]

In 2011, the Montreal Museum of Fine Arts in collaboration with the Maison Jean Paul Gaultier organized a retrospective exhibit, "The Fashion World of Jean Paul Gaultier: From the Sidewalk to the Catwalk."[23] That exhibit is on tour with venues at the Swedish Centre for Architecture and Design (Arkitektur- och designcentrum, ArkDes) in Stockholm,[5] the Brooklyn Museum in New York City,[24] the Barbican Centre in London,[25] the National Gallery of Victoria in Melbourne,[26] and the Grand Palais in Paris. The exhibition in Paris, which took place from April to August 2015, was the subject of a documentary called Jean Paul Gaultier at the Grand Palais aired exclusively on Eurochannel.[27]

The "granny grey" hair colour trend is attributed to Gaultier, whose autumn/winter 2011 show featured models in grey beehives. In the spring of 2015, his catwalk show at Paris Fashion Week featured silver-haired models again, as did the shows of other fashion designers, Chanel and Gareth Pugh. The trend soon took off among celebrities and the general public.[28]

In 2012, he was named as a member of the Jury for the Main Competition at the 2012 Cannes Film Festival.[29] This was the first time a fashion designer was called to sit on a jury at the festival.[30] That year, he also participated in the Cali ExpoShow in Cali (Colombia), showing his extensive collection of perfumes and all classic clothes.[31]

Up until 2014, he designed for three collections: his own couture and ready-to-wear lines, for both men and women. At the spring/summer 2015 show he announced that he was closing the ready-to-wear labels to focus on haute couture.[32]

In 2018, he staged a cabaret show that was loosely based on his life called "Fashion Freak Show" which took place at the Folies Bergere theater in Paris.[33]

In 2019, he released something very unexpected; A collaboration with New York streetwear brand Supreme. The collaboration was quite sought after by the Supreme community and the streetwear community in general. Some of the items in the collection were: One of his signature fragrances with a supreme “Box logo” on it, a spin on Supreme's box logo T-shirt, a reversible jacket that held a detachable backpack, multiple items of clothing with floral prints, two Vans sneakers with floral prints, a belt that had the Gaultier Supreme logo on it, a pair of Gaultier's iconic round glasses, a faux fur coat with a plaid design, a few items of clothing with “F*** Racism” iconography (which was a play on Gaultier's “Fight racism” T-shirts of the 90s), a pinstripe double breasted blazer, a pair of pinstripe cargo suit trousers, a pinstripe cargo suit vest and a leather holster.

He announced on January 17, 2020 that his next Paris haute couture fashion show would be his last and that he was retiring from the runway.[33]

In 1988, a Junior Gaultier outfit was selected by Jeff Banks as the Dress of the Year.[35] The Junior Gaultier label was replaced in 1994 with JPG by Gaultier, a unisex collection that followed the designer's idea of fluidity of the sexes. Gaultier Jean's, a similar line consisting mainly of denim and more simply styled garments with a heavy street influence, followed in 1992, which was then replaced with Jean's Paul Gaultier from 2004 to 2008. Junior Gaultier's name was reused in 2009 for the launching of the child's wear, to be completed with a Baby Line in 2011.

The advent of his haute couture line brought him massive success in 1997. Through this collection, he was able to freely express the scope and range of his aesthetic, drawing inspiration from radically divergent cultures, from Imperial India to Hasidic Judaism. As a result of this success, Hermès hired Gaultier as creative director from 2003 to 2010. Hermès took a 30% stake in Jean Paul Gaultier in 2003 and later increased their stake to 45%.[18]

Gaultier's spring 2009 couture was influenced by the visual style of singer Klaus Nomi,[36] and he used Nomi's recording of "Cold Song" in his runway show.[37] 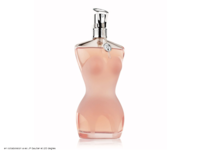 Jean Paul Gaultier fragrances have been licensed by Puig since 1 January 2016, and were previously licensed by Shiseido subsidiary Beauté Prestige International from 1991 through 31 December 2015. The BPI license was originally negotiated through 30 June 2016;[38] however, Puig acquired the license for $79.2 million and paid $22.6 million for the early termination of the license.[39] With this purchase, Puig now holds control of both the fashion and fragrance divisions of the Jean Paul Gaultier brand.[40] The 1993 women's oriental floral Classique and the 1995 men's oriental fougere Le Male have been described by the brand as "flagship" products that "represent all the Jean Paul Gaultier values".[41] Le Male was the top-selling men's fragrance in the European Union in 2012, and holds a strong market position in Australia and the United States.[42]

The fragrance house includes women's, men's, and unisex fragrances; a number of flanker fragrances have been released for each line.[43] As of May 2020[update], the Classique,[44] Le Male,[45] and Scandal lines are in production.[46]

Madonna's trademark corset with cone bra from the exhibition at the ArtDes, 2013

Gaultier produced sculptured costumes for Madonna during the nineties, starting with her infamous cone bra for her 1990 Blond Ambition World Tour, and designed the wardrobe for her 2006 Confessions Tour.[47]

Gaultier has designed some of the costumes and outfits worn by rocker Marilyn Manson,[48] including for his The Golden Age of Grotesque album.[49]

In France, the costumes he designed for singer Mylène Farmer gained much attention. In spring 2008 he signed a contract to be the fashion designer for her tour in 2009.[50] He designed a dress that Kerry Washington wore at the 2007 Cannes Film Festival.

In 2008, he designed the white and silver mermaid dress that Marion Cotillard wore at the 80th Academy Awards, when she won the Oscar for her performance in La Vie en Rose.[51][52]

He has designed many other red carpet outfits for artists such as Lady Gaga (VMAs red carpet, 2009), Rihanna (Grammys red carpet, 2011) and Beyoncé ("Run The World (Girls)" music video, 2011). His designs have also been worn by Nicki Minaj in numerous occasions. [53]

He designed the costumes for Kylie Minogue's international KylieX2008 tour, as well as Hong Kong singer Leslie Cheung, who hired Gaultier to design eight costumes for his last concert tour in 2000.[54]

In 2013, he designed the couture dress piece Rihanna wore at the American Music Awards. Her outfit sparked a lot of controversy, and many websites named her one of the best dressed of the night.[55] In 2013, he created a digital first working with artist and activist Nik Thakkar, who is music artist NEO 10Y for the brand's digital campaign which was styled by and features the artist. [56]

Kim Kardashian wore one of his designs on the Grammys red carpet in 2015.

In 2016, he designed more than 500 costumes for the revue THE ONE Grand Show at Friedrichstadt-Palast Berlin.

He also designed the dress Katy Perry wore at a Vanity Fair after-party in early 2017.

In 2017, he designed a dress that Solange Knowles wore to the 2017 Glamour Women of the Year Awards in New York City. This dress was a part of the Jean Paul Gaultier Fall 2017 couture collection.[citation needed]

Gaultier designed the wardrobe for many motion pictures, including:[57]