From Wikipedia, the free encyclopedia
Jump to navigation Jump to search
8th-century Byzantine monk and saint
For the poem by Aleksey Konstantinovich Tolstoy, see John of Damascus (poem).
"Chrysorrhoas" redirects here. For the river, see Barada.

A polymath whose fields of interest and contribution included law, theology, philosophy, and music, he is said by some sources to have served as a Chief Administrator to the Muslim caliph of Damascus before his ordination.[6][7] He wrote works expounding the Christian faith, and composed hymns which are still used both liturgically in Eastern Christian practice throughout the world as well as in western Lutheranism at Easter.[8] He is one of the Fathers of the Eastern Orthodox Church and is best known for his strong defence of icons.[9] The Catholic Church regards him as a Doctor of the Church, often referred to as the Doctor of the Assumption due to his writings on the Assumption of Mary.[10]

The most common source of information for the life of John of Damascus is a work attributed to one John of Jerusalem, identified therein as the Patriarch of Jerusalem.[11] This is an excerpted translation into Greek of an earlier Arabic text. The Arabic original contains a prologue not found in most other translations, and was written by an Arab monk, Michael. Michael explained that he decided to write his biography in 1084 because none was available in his day. However, the main Arabic text seems to have been written by an earlier author sometime between the early 9th and late 10th centuries AD.[11] Written from a hagiographical point of view and prone to exaggeration and some legendary details, it is not the best historical source for his life, but is widely reproduced and considered to contain elements of some value.[12] The hagiographic novel Barlaam and Josaphat, traditionally attributed to John, is in fact a work of the 10th century.[13]

John was born in Damascus in the third quarter of the 7th century AD, to a prominent Damascene Christian family known as "Mansoūr".[14] The family was named after John's grandfather, Mansour ibn Sarjun, who had been responsible for the taxes of the region during the reign of Emperor Heraclius.[15][16] Mansur seems to have played a role in the capitulation of Damascus to the troops of Khalid ibn al-Walid in 635 after securing favorable conditions of surrender.[15][16] Eutychius, a 10th-century Melkite patriarch, mentions him as one high-ranking official involved in the surrender of the city to the Muslims.[17]

Though information about the tribal background of the Mansour family are absent in contemporary sources, biographer Daniel Sahas speculates the name Mansour could have implied that they belonged to the Arab Christian tribes of Kalb or Taghlib.[18] Moreover, the family name was common among Syrian Christians of Arab origins, and Eutychius noted that the governor of Damascus, who was likely Mansour ibn Sarjun, was an Arab.[18] However, Sahas also asserts that the name does not necessarily imply an Arab background and could have been used by non-Arab, Semitic Syrians.[18] While Sahas and biographers F. H. Chase and Andrew Louth assert that Mansūr was an Arabic name, Raymond le Coz asserts that the "family was without doubt of Syrian origin";[19] indeed, according to historian Daniel J. Janosik, "Both aspects could be true, for if his family ancestry were indeed Syrian, his grandfather [Mansour] could have been given an Arabic name when the Arabs took over the government."[20] John was raised in Damascus, and Arab Christian folklore holds that during his adolescence, John associated with the future Umayyad caliph Yazid I and the Taghlibi Christian court poet al-Akhtal.[21]

When Syria was conquered by the Muslim Arabs in the 630s, the court at Damascus retained its large complement of Christian civil servants, John's grandfather among them.[15][17] John's father, Sarjun (Sergius), went on to serve the Umayyad caliphs.[15] According to John of Jerusalem and some later versions of his life, after his father's death, John also served as an official to the caliphal court before leaving to become a monk. This claim, that John actually served in a Muslim court, has been questioned since he is never mentioned in Muslim sources, which however do refer to his father Sarjun (Sergius) as a secretary in the caliphal administration.[22] In addition, John's own writings never refer to any experience in a Muslim court. It is believed that John became a monk at Mar Saba, and that he was ordained as a priest in 735.[15][23] 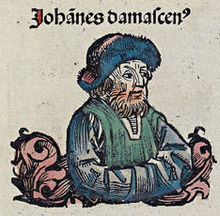 John of Damascus in the Nuremberg Chronicle

One of the vitae describes his father's desire for him to "learn not only the books of the Muslims, but those of the Greeks as well." From this it has been suggested that John may have grown up bilingual.[24] John does indeed show some knowledge of the Quran, which he criticizes harshly.[25] (see Christianity and Islam).

Other sources describe his education in Damascus as having been conducted in accordance with the principles of Hellenic education, termed "secular" by one source and "Classical Christian" by another.[26][27] One account identifies his tutor as a monk by the name of Cosmas, who had been kidnapped by Arabs from his home in Sicily, and for whom John's father paid a great price. Under the instruction of Cosmas, who also taught John's orphan friend, Cosmas of Maiuma, John is said to have made great advances in music, astronomy and theology, soon rivalling Pythagoras in arithmetic and Euclid in geometry.[27] As a refugee from Italy, Cosmas brought with him the scholarly traditions of Latin Christianity.

John had at least one and possibly two careers: one (less well-documented) as a civil servant for the Caliph in Damascus, and the other (better-attested) as a priest and monk at the Mar Saba monastery near Jerusalem. One source believes John left Damascus to become a monk around 706, when al-Walid I increased the Islamicisation of the Caliphate's administration.[28] However, Muslim sources only mention that his father Sarjun (Sergius) left the administration around this time, and fail to name John at all.[22] During the next two decades, culminating in the Siege of Constantinople (717-718), the Umayyad Caliphate progressively occupied the borderlands of the Byzantine Empire. An editor of John's works, Father Le Quien, has shown that John was already a monk at Mar Saba before the dispute over iconoclasm, explained below.[29]

In the early 8th century AD, iconoclasm, a movement opposed to the veneration of icons, gained acceptance in the Byzantine court. In 726, despite the protests of Germanus, Patriarch of Constantinople, Emperor Leo III (who had forced the emperor to abdicate and himself assumed the throne in 717 immediately before the great siege) issued his first edict against the veneration of images and their exhibition in public places.[30]

All agree that John of Damascus undertook a spirited defence of holy images in three separate publications. The earliest of these works, his "Apologetic Treatises against those Decrying the Holy Images", secured his reputation. He not only attacked the Byzantine emperor, but adopted a simplified style that allowed the controversy to be followed by the common people, stirring rebellion among the iconoclasts. Decades after his death, John's writings would play an important role during the Second Council of Nicaea (787), which convened to settle the icon dispute.[31]

John's biography recounts at least one episode deemed improbable or legendary.[29][32] Leo III reportedly sent forged documents to the caliph which implicated John in a plot to attack Damascus. The caliph then ordered John's right hand be cut off and hung up in public view. Some days afterwards, John asked for the restitution of his hand, and prayed fervently to the Theotokos before her icon: thereupon, his hand is said to have been miraculously restored.[29] In gratitude for this miraculous healing, he attached a silver hand to the icon, which thereafter became known as the "Three-handed", or Tricheirousa.[33]. That icon is now located in the Helandarion monastery of the Holy Mountain.

John died in 749 as a revered Father of the Church, and is recognized as a saint. He is sometimes called the last of the Church Fathers by the Roman Catholic Church. In 1890 he was declared a Doctor of the Church by Pope Leo XIII.

When the name of John of Damascus was inserted in the General Roman Calendar in 1890, it was assigned to 27 March. The feast day was moved in 1969 to the day of John's death, 4 December, the day on which his feast day is celebrated also in the Byzantine Rite calendar,[34] Lutheran Commemorations,[35] and the Anglican Communion and Episcopal Church.[36]

The 1884 choral work John of Damascus ("A Russian Requiem"), Op. 1, for four-part mixed chorus and orchestra, by Russian composer Sergei Taneyev, is dedicated to Saint John. 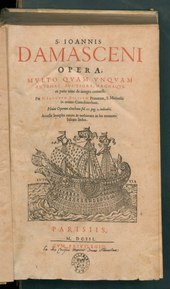 Besides his purely textual works, many of which are listed below, John of Damascus also composed hymns, perfecting the canon, a structured hymn form used in Byzantine Rite liturgies.[37]

As stated above, in the final chapter of Concerning Heresy, John mentions Islam. He is one of the first known Christian critics of Islam. John claims that Muslims were once worshipers of Aphrodite who followed after Mohammad because of his "seeming show of piety," and that Mohammad himself read the Bible and, "likewise, it seems," spoke to an Arian monk that taught him Arianism instead of Christianity. John also claims to have read the Quran, or at least parts of it, as he criticizes the Quran for saying that the Virgin Mary was the sister of Moses and Aaron and that Jesus was not crucified but brought alive into heaven. John further claims to have spoken to Muslims about Mohammad. He uses the royal we, whether in reference to himself, or to a group of Christians that he belonged to who spoke to the Muslims, or in reference to Christians in general.[42]

Regardless, John claims that he asked the Muslims what witnesses can testify that Mohammad received the Quran from God - since, John says, Moses received the Torah from God in the presence of the Israelites, and since Islamic law mandates that a Muslim can only marry and do trade in the presence of witnesses - and what biblical prophets and verses foretold Mohammad's coming - since, John says, Jesus was foretold by the prophets and whole Old Testament. John claims that the Muslims answered that Mohammad received the Quran in his sleep. John claims that he jokingly answered, "You're spinning me dreams."[43]

John ends the chapter quickly by claiming that Islam permits polygamy, that Mohammad committed adultery with a companion's wife before outlawing adultery, and that the Quran is filled with ridiculous stories, such as the She-Camel of God and God giving Jesus an "incorruptible table."[46]

It is believed that the homily on the Annunciation was the first work to be translated into Arabic. Much of this text is found in Manuscript 4226 of the Library of Strasbourg (France), dating to 885 AD.[47]

Later in the 10th century, Antony, superior of the monastery of St. Simon (near Antioch) translated a corpus of John Damascene. In his introduction to John's work, Sylvestre patriarch of Antioch (1724–1766) said that Antony was monk at Saint Saba. This could be a misunderstanding of the title Superior of Saint Simon probably because Saint Simon's monastery was in ruins in the 18th century.[48]

Most manuscripts give the text of the letter to Cosmas,[49] the philosophical chapters,[50] the theological chapters and five other small works.[51]

In 1085, Mikhael, a monk from Antioch wrote the Arabic life of the Chrysorrhoas.[52] This work was first edited by Bacha in 1912 and then translated in many languages (German, Russian and English).