From Wikipedia, the free encyclopedia
Jump to navigation Jump to search
For other uses, see Juliet (disambiguation).
character in Romeo and Juliet

Juliet Capulet is the female protagonist in William Shakespeare's romantic tragedy Romeo and Juliet. A 13-year-old girl, Juliet is the only daughter of the patriarch of the House of Capulet. She falls in love with the main protagonist Romeo, a member of the House of Montague, with which the Capulets have a blood feud. The story has a long history that precedes Shakespeare himself. 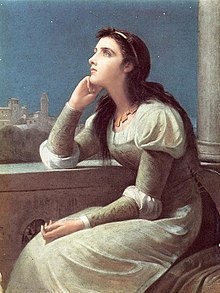 One aspect of the story which now seems problematic is Juliet's age. As the story occurs, Juliet is approaching her fourteenth birthday. She was born on "Lammas Eve at night" (1 August), so Juliet's birthday is 31 July (1.3.19). Her birthday is "a fortnight hence", putting the action of the play in mid-July (1.3.17). Her father states that she "hath not seen the change of fourteen years" (1.2.9). In many cultures and time periods, women did and do marry and bear children at an early age. Romeo and Juliet is a play about Italian families. Lady Capulet had given birth to her first child by the time she had reached Juliet's age: "By my count, I was your mother much upon these years that you are now a maid." (1.3.74–75).

Even Capulet tries to encourage Paris to wait a little longer before even thinking of marrying his daughter, feeling that she is still too young; "She hath not seen the change of fourteen years, Let two more summers wither in their pride, Ere we may think her ripe to be a bride". However, in the English poem the story is based on (Romeus and Juliet by Arthur Brooke)[1] Juliet is approaching her sixteenth birthday and Romeo is the same age whereas in the Bandello novella she is nearly eighteen with Romeo about twenty.[2] The common English people of that age were very rarely in their teens when they married and even among the nobility and gentry of the age, brides thirteen years of age were rare, at about one in one thousand brides; in that era, the vast majority of English brides were at least nineteen years of age when they first married, most commonly at about 23 years, and most English noblewomen were at least sixteen when they married. That the parts of young women were played by pre-adolescent boys in Shakespeare's day also cannot be overlooked and it is possible that Shakespeare had the physique of a young boy in mind during composition, in addition to the fact that Romeo and Juliet are of wealthy families and would be more likely to marry earlier than commoners.[3] At the time, English noblewomen married on average at 19–21 years (compared to 24–26 years for English noblemen) while the average marriage age in England was 25–26 years for women and 27–28 for men;[4] Sir Thomas More wrote in his Utopia that, in Utopia, women must be at least eighteen years of age when they marry and men at least 22 years.[5][6]

The common belief in Elizabethan England was that motherhood before sixteen was dangerous; popular manuals of health, as well as observations of married life, led Elizabethans to believe that early marriage and its consummation permanently damaged a young woman's health, impaired a young man's physical and mental development, and produced sickly or stunted children. Therefore, eighteen came to be considered the earliest reasonable age for motherhood and twenty and thirty the ideal ages for women and men, respectively, to marry. Shakespeare might also have reduced Juliet's age from sixteen to thirteen to demonstrate the dangers of marriage at too young of an age; that Shakespeare himself married Anne Hathaway when he was just eighteen might hold some significance.[2] 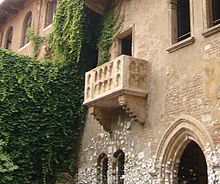 Juliet's purported balcony, in Verona. Beneath it, on the walls, there are love letters. 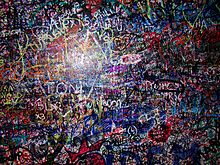 In Verona, an early 14th-century house at Via Cappello no. 23, claiming to be the Capulets' has been turned into a tourist attraction but it is mostly empty. The real second name was in Italian Cappelletti, a noble family, and not Capuleti. Cappelletti were in the past members of the light cavalry of the Republic of Venice. They fought for it since the 13th century and they were originally from Dalmatia and Albania. It features the balcony, and in the small courtyard, a bronze statue of Juliet. It is one of the most visited sites in the town. The metal of its chest is worn bare due to a legend that if a person strokes the right breast of the statue, that person will have good fortune and luck in love.[7]

Many people write their names and the names of their beloved ones on the walls of the entrance, known as Juliet's wall. Many believe that writing on that place will make their love everlasting. After a restoration and cleaning of the building, it was intended that further writing should be on replaceable panels[8] or white sheets[9] placed outside the wall.

It is also a tradition to put small love letters on the walls (which is done by the thousands each year), which are regularly taken down by employees to keep the courtyard clean.[10]

Another tradition that occurs in Juliet's courtyard is writing your name and that of your loved one on a lock and attaching it to a large ornamental gate in the back left. The gate is overwhelmed with locks that hold hope for lasting love. This tradition is seen throughout Europe on bridges and gates all over cities.

Since the 1930s, letters addressed to Juliet keep arriving in Verona. As of 2010, more than 5,000 letters were received annually, three-quarters of which were from women. The largest single group of senders was American teenagers.[11] The letters are read and replied to by local volunteers, organised since the 1980s in the Club di Giulietta (Juliet Club), which is financed by the City of Verona.[11] The club has been the subject of a book by Lise and Ceil Friedman and is the setting for a 2008 book by Suzanne Harper and a 2010 USA movie, Letters to Juliet. 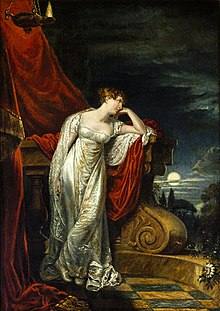 A number of famous actresses and some actors have portrayed the role of Juliet: