The Jurassic (/dʒʊˈræs.ɪk/ juu-RASS-ik;[1] from the Jura Mountains) is a geologic period and system that spanned 56 million years from the end of the Triassic Period 201.3 million years ago (Mya) to the beginning of the Cretaceous Period 145 Mya.[note 1] The Jurassic constitutes the middle period of the Mesozoic Era, also known as the Age of Reptiles. The start of the period was marked by the major Triassic–Jurassic extinction event. Two other extinction events occurred during the period: the Pliensbachian-Toarcian extinction in the Early Jurassic, and the Tithonian event at the end;[4] neither event ranks among the "Big Five" mass extinctions, however.

The Jurassic is named after the Jura Mountains in the European Alps, where limestone strata from the period were first identified. By the beginning of the Jurassic, the supercontinent Pangaea had begun rifting into two landmasses: Laurasia to the north, and Gondwana to the south. This created more coastlines and shifted the continental climate from dry to humid, and many of the arid deserts of the Triassic were replaced by lush rainforests.

On land, the fauna transitioned from the Triassic fauna, dominated by both dinosauromorph and crocodylomorph archosaurs, to one dominated by dinosaurs alone. The first birds also appeared during the Jurassic, having evolved from a branch of theropod dinosaurs. Other major events include the appearance of the earliest lizards, and the evolution of therian mammals, including primitive placentals. Crocodilians made the transition from a terrestrial to an aquatic mode of life. The oceans were inhabited by marine reptiles such as ichthyosaurs and plesiosaurs, while pterosaurs were the dominant flying vertebrates.

The name "Jura" is derived from the Celtic root *jor via Gaulish *iuris "wooded mountain", which, borrowed into Latin as a place name, evolved into Juria and finally Jura.[5][6][7]

The chronostratigraphic term "Jurassic" is directly linked to the Jura Mountains, a mountain range mainly following the course of the France–Switzerland border. During a tour of the region in 1795,[note 2] Alexander von Humboldt recognized the mainly limestone dominated mountain range of the Jura Mountains as a separate formation that had not been included in the established stratigraphic system defined by Abraham Gottlob Werner, and he named it "Jura-Kalkstein" ('Jura limestone') in 1799.[note 3][5][6][10]

Thirty years later, in 1829, the French naturalist Alexandre Brongniart published a survey on the different terrains that constitute the crust of the Earth. In this book, Brongniart referred to the terrains of the Jura Mountains as terrains jurassiques, thus coining and publishing the term for the first time.[11]

Pangaea at the start of Jurassic 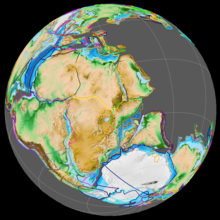 The breakup of Gondwanaland took place during the Late Jurassic, the Indian Ocean opened up as a result

During the early Jurassic period, the supercontinent Pangaea broke up into the northern supercontinent Laurasia and the southern supercontinent Gondwana; the Gulf of Mexico opened in the new rift between North America and what is now Mexico's Yucatán Peninsula. The Jurassic North Atlantic Ocean was relatively narrow, while the South Atlantic did not open until the following Cretaceous period, when Gondwana itself rifted apart.[13] The Tethys Sea closed, and the Neotethys basin appeared. Climates were warm, with no evidence of a glacier having appeared. As in the Triassic, there was apparently no land over either pole, and no extensive ice caps existed.

The Jurassic geological record is good in western Europe, where extensive marine sequences indicate a time when much of that future landmass was submerged under shallow tropical seas; famous locales include the Jurassic Coast World Heritage Site in southern England and the renowned late Jurassic lagerstätten of Holzmaden and Solnhofen in Germany.[14] In contrast, the North American Jurassic record is the poorest of the Mesozoic, with few outcrops at the surface.[15] Though the epicontinental Sundance Sea left marine deposits in parts of the northern plains of the United States and Canada during the late Jurassic, most exposed sediments from this period are continental, such as the alluvial deposits of the Morrison Formation.

The Jurassic was a time of calcite sea geochemistry in which low-magnesium calcite was the primary inorganic marine precipitate of calcium carbonate. Carbonate hardgrounds were thus very common, along with calcitic ooids, calcitic cements, and invertebrate faunas with dominantly calcitic skeletons.[16]

The first of several massive batholiths were emplaced in the northern American cordillera beginning in the mid-Jurassic, marking the Nevadan orogeny.[17] Important Jurassic exposures are also found in Russia, India, South America, Japan, Australasia and the United Kingdom.

In Africa, Early Jurassic strata are distributed in a similar fashion to Late Triassic beds, with more common outcrops in the south and less common fossil beds which are predominated by tracks to the north.[18] As the Jurassic proceeded, larger and more iconic groups of dinosaurs like sauropods and ornithopods proliferated in Africa.[18] Middle Jurassic strata are neither well represented nor well studied in Africa.[18] Late Jurassic strata are also poorly represented apart from the spectacular Tendaguru fauna in Tanzania.[18] The Late Jurassic life of Tendaguru is very similar to that found in western North America's Morrison Formation.[18]

During the Jurassic period, the primary vertebrates living in the sea were fish and marine reptiles. The latter include ichthyosaurs, which were at the peak of their diversity, plesiosaurs, pliosaurs, and marine crocodiles of the families Teleosauridae and Metriorhynchidae.[19] Numerous turtles could be found in lakes and rivers.[20][21]

In the invertebrate world, several new groups appeared, including rudists (a reef-forming variety of bivalves) and belemnites. Calcareous sabellids (Glomerula) appeared in the Early Jurassic.[22][23] The Jurassic also had diverse encrusting and boring (sclerobiont) communities, and it saw a significant rise in the bioerosion of carbonate shells and hardgrounds. Especially common is the ichnogenus (trace fossil) Gastrochaenolites.[24]

During the Jurassic period, about four or five of the twelve clades of planktonic organisms that exist in the fossil record either experienced a massive evolutionary radiation or appeared for the first time.[12] 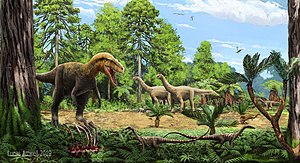 Example of Rare Early Jurassic (Toarcian) Ecosystem, the Ciechocinek Formation of Poland. This zone was characterised by a very humid ecosystem populated by dinosaur megafauna, more related in several aspects to Middle or Late Jurassic dinosaurs

On land, various archosaurian reptiles remained dominant. The Jurassic was a golden age for the large herbivorous dinosaurs known as the sauropods—Camarasaurus, Apatosaurus, Diplodocus, Brachiosaurus, and many others—that roamed the land late in the period; their foraging grounds were either the prairies of ferns, palm-like cycads and bennettitales, or the higher coniferous growth, according to their adaptations. The smaller Ornithischian herbivore dinosaurs, like stegosaurs and small ornithopods were less predominant, but played important roles. They were preyed upon by large theropods, such as Ceratosaurus, Megalosaurus, Torvosaurus and Allosaurus, all these belong to the 'lizard hipped' or saurischian branch of the dinosaurs.[25]

During the Late Jurassic, the first avialans, like Archaeopteryx, evolved from small coelurosaurian dinosaurs. In the air, pterosaurs were common; they ruled the skies, filling many ecological roles now taken by birds,[26] and may have already produced some of the largest flying animals of all time.[27][28] Within the undergrowth were various types of early mammals, as well as tritylodonts, lizard-like sphenodonts, and early lissamphibians. The rest of the Lissamphibia evolved in this period, introducing the first salamanders and caecilians.[29]

Conifers were the dominant land plants of the Jurassic

Extant conifer families that flourished during the Jurassic included the Araucariaceae, Cephalotaxaceae, Pinaceae, Podocarpaceae, Taxaceae and Taxodiaceae.[31] The extinct Mesozoic conifer family Cheirolepidiaceae dominated low latitude vegetation, as did the shrubby Bennettitales.[32] Cycads, similar to palm trees, were also common, as were ginkgos and Dicksoniaceous tree ferns in the forest.[12] Smaller ferns were probably the dominant undergrowth. Caytoniaceous seed ferns were another group of important plants during this time and are thought to have been shrub to small-tree sized.[33] Ginkgo plants were particularly common in the mid- to high northern latitudes.[12] In the Southern Hemisphere, podocarps were especially successful, while Ginkgos and Czekanowskiales were rare.[30][32]

In the oceans, modern coralline algae appeared for the first time.[12] However, they were a part of another major extinction that happened within the next major time period.

Since the early 1990s, the term Jurassic has been popularised by the Jurassic Park franchise, which started in 1990 with Michael Crichton's novel of the same title and its film adaptation, first released in 1993.

This audio file was created from a revision of the article "Jurassic" dated 2010-08-19, and does not reflect subsequent edits to the article. (Audio help)
More spoken articles
Retrieved from "https://en.wikipedia.org/w/index.php?title=Jurassic&oldid=960127105"
Categories:
Hidden categories: