From Wikipedia, the free encyclopedia
(Redirected from Leave no trace)
Jump to navigation Jump to search
Set of outdoor ethics
For the 2018 film, see Leave No Trace (film).

"Leave no trace" sign on the Attikamek Trail near Sault Ste. Marie Canal in Canada. 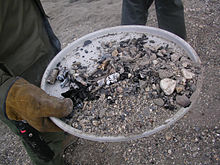 A demonstration of a Leave No Trace fire in a fire pan.

Leave No Trace is a set of outdoor ethics promoting conservation in the outdoors. It consists of seven principles:[1]

These principles have been adapted to different activities, ecosystems and environments.

In the mid 20th-century there was a cultural shift in wilderness ethics from woodcraft where wilderness travelers prided themselves on their ability to rely on the resources of wild lands to a post-WWII ethics of minimal impact on the environment.[2] Leave No Trace began in the 1960s and 1970s.[3] There was a large increase of wilderness visitation following the creation of new recreational equipment such as white gas stoves, synthetic tents, and sleeping pads. This began a commercial interest in outdoor recreation which in turn caused more visitors to national parks.[2] In those decades, the United States Forest Service, the Bureau of Land Management, and the National Park Service started to teach their non-motorized visitors how to have a minimal impact on the land. Wilderness Informational Specialists were trained to educate visitors on minimal impact camping in the different parks. In 1987 the three departments cooperatively developed a pamphlet titled "Leave No Trace Land Ethics".[4]

Also in the 1970s, groups such as the Sierra Club were advocating minimum impact camping techniques. The Boy Scouts of America had been actively advocating training and implementation of Leave No Trace and outdoor ethics principles early in the 1970s at such places as Philmont Scout Ranch in Northern New Mexico. A pilot program in the 1980s between the BSA and the Bureau of Land Management in the High Uintas Wilderness tried to reach a wide audience.

The national education program of Leave No Trace was developed in 1990 by the United States Forest Service in conjunction with the National Outdoor Leadership School (NOLS). At the time the USFS also created other programs such as Smokey Bear, Woodsy Owl, and previously in 1985 the Tread Lightly! program which was geared towards motorized recreation. The Bureau of Land Management joined the program in 1993 followed by the National Park Service and U.S. Fish and Wildlife Service in 1994.[4]

Leave No Trace provides a framework for outdoor recreation decision making, which is summarized in the following seven principles. Originally developed for the "backcountry", there are now also seven "frontcountry" principles as well:[5]

Two primary scientific disciplines form the foundation of the Leave No Trace program: recreation ecology and human dimensions of natural resources. Recreation ecology research, "a field of study that examines, assesses and monitors visitor impacts, typically to protected natural areas, and their relationships to influential factors" has provided the foundation for Leave No Trace messaging because of its focus on recreational impacts. Recreation ecology has dominated most minimum-impact research, and reviews suggest that there have been over one thousand recreation ecology articles published within recent decades. Examples include both ecological and social impacts of visitors.[7] Yet, the behavior of outdoor enthusiasts is perhaps[citation needed] the largest determinant of impact, and human dimensions research, which focuses on the sociological, psychological, cultural, and economic aspects of recreationists is limited but growing with regard to Leave No Trace-related studies.

The majority of human dimensions research related to Leave No Trace has evaluated educational effectiveness through various communication strategies in an effort to increase knowledge and influence behavioral change. For example, studies have evaluated communication strategies to mitigate human and wildlife conflict, reduce litter, minimize removal of natural objects or deter off-trail hiking. Few studies have addressed Leave No Trace specifically, instead focusing on minimum-impact behaviors broadly, and even fewer studies have evaluated the most common user-group, frontcountry visitors. More recently, however, social scientists have explored concepts such as knowledge, attitudes, beliefs, values, and behaviors of outdoor enthusiasts in the context of Leave No Trace practices, and have begun examining the perceptions of frontcountry visitors.

Scout troop Outdoor code is in the Boy Scout Handbook of 1955.

'Be clean in my outdoor manners.' I will treat the outdoors as a heritage. I will take care of it for myself and others. I will keep my trash and garbage out of lakes, streams, fields, woods, and roadways.

'Be careful with fire.' I will prevent wildfire. I will build my fires only where they are appropriate. When I have finished using a fire, I will make sure it is cold out. I will leave a clean fire ring, or remove all evidence of my fire.

'Be considerate in the outdoors.' I will treat public and private property with respect. I will use low-impact methods of hiking and camping.

'Be conservation-minded.' I will learn how to practice good conservation of soil, water, forests, minerals, grasslands, wildlife, and energy. I urge others to do the same."

The Center's mission is to teach people how to enjoy the outdoors responsibly. This mission is accomplished through education, research, volunteerism and partnerships. Leave No Trace tries to build awareness, appreciation and respect for wildlands.

The Center has partnerships with the National Park Service, the U.S. Forest Service, the Bureau of Land Management, the U.S. Fish and Wildlife Service,[9] US Army Corps of Engineers, and other partners such as colleges, universities, outfitter/guide services, small businesses, non-profits and youth serving organizations such as the Boy Scouts of America and the American Camp Association.

There are also formal Leave No Trace organisations in Australia, Canada, Ireland and New Zealand.

Despite the fact that Leave No Trace is a widely accepted conservationist ethic, there has been a good amount of criticism. Environmental historian James Morton Turner argued in 2002 that Leave No Trace focused attention of backpackers "largely on protecting wilderness as a recreational landscape" rather than tackling larger questions, such as "the modern economy, consumerism, and the environment".[10] Turner also argues that this ethic omitted the calculus behind it, and the code itself, in his view, "helped ally the modern backpacker with the wilderness recreation industry" by encouraging backpackers to practice the Leave No Trace ethic while in the wilderness and to keep an eye out for the logo of this ethic in shopping malls.[10]

Gregory Simon and Peter Alagona had a different argument, saying in a 2009 article that there should be a move beyond Leave No Trace. They argued that this ethic "disguises much about human relationships with non-human nature" because it makes it seem that parks and wilderness areas are "pristine nature" which in their view, "erases their human histories, and prevents people from understanding how these landscapes have developed over time through complex human–environment interactions".[11] In the place of this ethic, they say that there should be a new environmental ethic "that transforms the critical scholarship of social science into a critical practice of wilderness recreation, addresses the global economic system...and reinvents wilderness recreation as a more collaborative, participatory, productive, democratic, and radical form of political action".[11] In the article they also write about how certain corporations in the outdoor recreation industry and magazines like National Geographic support Leave No Trace (LNT), but that in stores for outdoor recreation products like REI, "the LNT logo becomes both a corporate brand and an official stamp of approval".[11]

The authors also argue that because LNT "focuses on the immediate, local impacts of recreational use while ignoring larger issues of change over time and connections through space" it has what they consider "two conceptual flaws": the idea that the current wilderness is in a "natural, pristine condition" and the obscuring of the "spatial connections between what takes place inside parks and wilderness areas and what occurs outside".[11] The authors note that additionally, this ethic is limited in scope, offering "a code of conduct calibrated to the particular, limited, and arbitrary geographic scale of parks and wilderness areas".[11] They articulate their new environmental ethic as expanding LNT, not rejecting it all together, expanding its "spatial scale beyond the boundaries of parks and wilderness areas...broaden[ing] LNT’s ethical purview to include the global economic systems that make contemporary American wilderness recreation possible", redefining recreationists rather than "passive ethical subjects and consumers, to active participants in collaborative programs" and in sum, "a more democratic, more participatory, and more radical vision of outdoor recreation as a form of political action".[11] Near the end of the article, the authors articulate the seven principles of what they call 'Beyond Leave No Trace':[11]

Three years later, Simon and Alagona responded to critiques of their 2009 article calling for a 'Beyond Leave No Trace' approach. They argued that they were not the first to explore LNT's history, that they "joined a growing chorus of researchers", and importantly that they "remain steadfast in our endorsement of LNT’s value and potential" but that they believe that "this simple ethic is not enough in a world of global capital circulation where the goods we produce and consume in order to enjoy the outdoors can have long-term and far-reaching social and environmental ramifications".[12] While dismissing the concerns of critics, they write that, firstly, Leave No Trace "could not exist in its current form without a plethora of consumer products;" secondly, that "the use of such products does not erase environmental impacts;" and thirdly that LNT "systematically obscures these impacts, displacements, and connections by encouraging the false belief that it is possible to 'leave no trace'".[12]

Other critics of Leave No Trace have argued that it is impractical, displaces environmental impacts to other locations, "obscures connections between the uses of outdoor products and their production and disposal impacts" and have questioned how much the ethic affects everyday environmental behavior.[13][14]