From Wikipedia, the free encyclopedia
(Redirected from Legerdemain)
Jump to navigation Jump to search
For other uses, see Sleight of hand (disambiguation).
Fine motor skills used to entertain or manipulate

A cardsharp using sleight of hand to win a game of cards.

Sleight of hand (also known as prestidigitation or legerdemain) refers to fine motor skills when used by performing artists in different art forms to entertain or manipulate. It is closely associated with close-up magic, card magic, card flourishing and stealing.

Because of its heavy use and practice by magicians, sleight of hand is often confused as a branch of magic. But it is actually a separate genre of entertainment and many artists practice sleight of hand as an independent skill.

The word sleight, meaning "the use of dexterity or cunning, especially so as to deceive", comes from the Old Norse.[1] The phrase sleight of hand means "quick fingers" or "trickster fingers".[1] Common synonyms of Latin and French include prestidigitation and legerdemain respectively.[1] Seneca the Younger, philosopher of the Silver Age of Latin literature, famously compared rhetorical techniques and illusionist techniques.[2]

Sleight of hand is often used in close-up magic, where the sleights are performed with the audience close to the magician, usually in physical contact or within 3 to 4 m (10 to 13 ft).[3] This close contact eliminates theories of fake audience members and the use of gimmicks.[3] It makes use of everyday items as props, such as cards, coins, rubber bands, paper, phones and even saltshakers.[3] A well-performed sleight looks like an ordinary, natural and completely innocent gesture, change in hand position or body posture.[4] In addition to manual dexterity, sleight of hand in close-up magic depends on the use of psychology, timing, misdirection, and natural choreography in accomplishing a magical effect.[4]

Sleight of hand during stage magic performances is not common, as most magic events and stunts are performed with objects visible to a much larger audience, but is nevertheless done occasionally by many stage performers.[5] The most common magic tricks performed with sleight of hand on stage are rope manipulations and card tricks, with the first typically being done with a member of the audience to rule out the possibility of stooges and the latter primarily being done on a table while a camera is live-recording, allowing the rest of audience to see the performance on a big screen.[6][7] Worldwide acclaimed stage magician David Copperfield often includes illusions featuring sleight of hand in his stage shows.[7]

Although being mostly used for entertainment and comedy purposes, sleight of hand is also notoriously used to cheat at casinos and gambling facilities throughout the world.[8] Common ways to professionally cheat at card games using sleight of hand include palming, switching, ditching, and stealing cards from the table.[8] Such techniques involve extreme misdirection and years of practice.[8] For these reasons, the term sleight of hand frequently carries negative associations of dishonesty and deceit at many gambling halls, and many magicians known around the world are publicly banned from casinos, such as British mentalist and close-up magician Derren Brown, who is banned from every casino in Britain.[9] 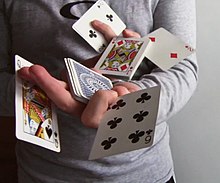 Cardistry is closely related to sleight of hand

Unlike card tricks done on the streets or on stage and card cheating, cardistry is solely about impressing without illusions, deceit, misdirection and other elements commonly used in card tricks and card cheating.[10] Cardistry is the art of card flourishing, and is intended to be visually impressive and to give the appearance of being difficult to perform.[10] Card flourishing is often associated with card tricks, but many sleight of hand artists perform flourishing without considering themselves magicians or having any real interest in card tricks.[10]

The art of card throwing generally consists of throwing standard playing cards with excessively high speed and accuracy, powerful enough to slice fruits like carrots and even melons.[11][12] Like flourishing, throwing cards are meant to be visibly impressive and does not include magic elements.[12] Magician Ricky Jay popularized throwing cards within the sleight of hand industry with the release of his 1977 book entitled Cards as Weapons, which was met with large sales and critical acclaim.[13] Some magic tricks, both close-up and on stage, are heavily connected to throwing cards.[14]

This audio file was created from a revision of the article "Sleight of hand" dated 2019-10-25, and does not reflect subsequent edits to the article. (Audio help)
More spoken articles
Retrieved from "https://en.wikipedia.org/w/index.php?title=Sleight_of_hand&oldid=962191100"
Categories:
Hidden categories: