The Book of Leviticus (/lɪˈvɪtɪkəs/) is the third book of the Torah and of the Old Testament; scholars generally agree that it developed over a long period of time, reaching its present form during the Persian Period between 538-332 BC.

The instructions of Leviticus emphasize ritual, legal and moral practices rather than beliefs. Nevertheless, they reflect the world view of the creation story in Genesis 1 that God wishes to live with humans. The book teaches that faithful performance of the sanctuary rituals can make that possible, so long as the people avoid sin and impurity whenever possible. The rituals, especially the sin and guilt offerings, provide the means to gain forgiveness for sins (Leviticus 4–5) and purification from impurities (Leviticus 11–16) so that God can continue to live in the Tabernacle in the midst of the people.[1]

The English name Leviticus comes from the Latin Leviticus, which is in turn from the Greek Λευιτικόν, Leuitikon, referring to the priestly tribe of the Israelites, “Levi.” The Greek expression is in turn a variant of the rabbinic Hebrew torat kohanim,[2] "law of priests", as many of its laws relate to priests.[3]

In Hebrew the book is called Vayikra (Hebrew: וַיִּקְרָא), from the opening of the book, va-yikra "And He [God] called."[2]

The outlines from commentaries are similar, though not identical; compare those of Wenham, Hartley, Milgrom, and Watts.[4][5][6][7]

A. Instructions for the laity on bringing offerings (1:1–6:7)

IV. Day of Atonement: purification of the tabernacle from the effects of uncleanliness and sin (ch. 16) 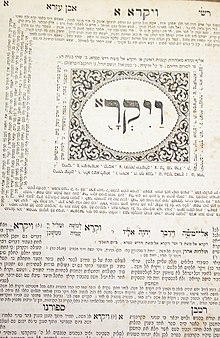 Chapters 1–5 describe the various sacrifices from the sacrificers' point of view, although the priests are essential for handling the blood. Chapters 6–7 go over much the same ground, but from the point of view of the priest, who, as the one actually carrying out the sacrifice and dividing the "portions", needs to know how to do this. Sacrifices are between God, the priest, and the offerers, although in some cases the entire sacrifice is a single portion to God—i.e., burnt to ashes.[8]

Chapters 8–10 describe how Moses consecrates Aaron and his sons as the first priests, the first sacrifices, and God's destruction of two of Aaron's sons for ritual offenses. The purpose is to underline the character of altar priesthood (i.e., those priests with power to offer sacrifices to God) as an Aaronite privilege, and the responsibilities and dangers of their position.[9]

With sacrifice and priesthood established, chapters 11–15 instruct the lay people on purity (or cleanliness). Eating certain animals produces uncleanliness, as does giving birth; certain skin diseases (but not all) are unclean, as are certain conditions affecting walls and clothing (mildew and similar conditions); and genital discharges, including female menses and male gonorrhea, are unclean. The reasoning behind the food rules are obscure; for the rest the guiding principle seems to be that all these conditions involve a loss of "life force", usually but not always blood.[10]

Leviticus 16 concerns the Day of Atonement. This is the only day on which the High Priest is to enter the holiest part of the sanctuary, the holy of holies. He is to sacrifice a bull for the sins of the priests, and a goat for the sins of the laypeople. The priest is to send a second goat into the desert to "Azazel", bearing the sins of the whole people. Azazel may be a wilderness-demon, but its identity is mysterious.[11]

Chapters 17–26 are the Holiness code. It begins with a prohibition on all slaughter of animals outside the Temple, even for food, and then prohibits a long list of sexual contacts and also child sacrifice. The "holiness" injunctions which give the code its name begin with the next section: there are penalties for the worship of Molech, consulting mediums and wizards, cursing one's parents and engaging in unlawful sex. Priests receive instruction on mourning rituals and acceptable bodily defects. The punishment for blasphemy is death, and there is the setting of rules for eating sacrifices; there is an explanation of the calendar, and there are rules for sabbatical and Jubilee years; there are rules for oil lamps and bread in the sanctuary; and there are rules for slavery.[12] The code ends by telling the Israelites they must choose between the law and prosperity on the one hand, or, on the other, horrible punishments, the worst of which will be expulsion from the land.[13]

Chapter 27 is a disparate and probably late addition telling about persons and things serving as dedication to the Lord and how one can redeem, instead of fulfill, vows.[14]

The Tabernacle and the Camp (19th Century drawing)

The majority of scholars have concluded that the Pentateuch received its final form during the Persian period (538–332 BC).[15] Nevertheless, Leviticus had a long period of growth before reaching that form.[16]

The entire composition of the book of Leviticus is Priestly literature.[17] Most scholars see chapters 1–16 (the Priestly code) and chapters 17–26 (the Holiness code) as the work of two related schools, but while the Holiness material employs the same technical terms as the Priestly code, it broadens their meaning from pure ritual to the theological and moral, turning the ritual of the Priestly code into a model for the relationship of Israel to God: as the tabernacle, which is apart from uncleanliness, becomes holy by the presence of the Lord, so He will dwell among Israel when Israel receives purification (becomes holy) and separates from other peoples.[18] The ritual instructions in the Priestly code apparently grew from priests giving instruction and answering questions about ritual matters; the Holiness code (or H) used to be a separate document, later becoming part of Leviticus, but it seems better to think of the Holiness authors as editors who worked with the Priestly code and actually produced Leviticus as we now have it.[19]

Many scholars argue that the rituals of Leviticus have a theological meaning concerning Israel's relationship with its God. Jacob Milgrom was especially influential in spreading this view. He maintained that the priestly regulations in Leviticus expressed a rational system of theological thought. The writers expected them to be put into practice in Israel's temple, so the rituals would express this theology as well, as well as ethical concern for the poor.[20] Milgrom also argued that the book's purity regulations (chaps. 11–15) have a basis in ethical thinking.[21] Many other interpreters have followed Milgrom in exploring the theological and ethical implications of Leviticus's regulations (e.g. Marx, Balentine), though some have questioned how systematic they really are.[22] Ritual, therefore, is not taking a series of actions for their own sake, but a means of maintaining the relationship between God, the world, and humankind.[23]

The main function of the priests is service at the altar, and only the sons of Aaron are priests in the full sense.[24] (Ezekiel also distinguishes between altar-priests and lower Levites, but in Ezekiel the altar-priests are sons of Zadok instead of sons of Aaron; many scholars see this as a remnant of struggles between different priestly factions in First Temple times, finding resolution by the Second Temple into a hierarchy of Aaronite altar-priests and lower-level Levites, including singers, gatekeepers and the like).[25]

In chapter 10, God kills Nadab and Abihu, the oldest sons of Aaron, for offering "strange incense". Aaron has two sons left. Commentators have read various messages in the incident: a reflection of struggles between priestly factions in the post–Exilic period (Gerstenberger); or a warning against offering incense outside the Temple, where there might be the risk of invoking strange gods (Milgrom). In any case, there has been a pollution of the sanctuary by the bodies of the two dead priests, leading into the next theme, holiness.[26]

Ritual purity is essential for an Israelite to be able to approach Yahweh and remain part of the community.[9] Uncleanliness threatens holiness;[27] Chapters 11–15 review the various causes of uncleanliness and describe the rituals which will restore cleanliness;[28] one is to maintain cleanliness through observation of the rules on sexual behaviour, family relations, land ownership, worship, sacrifice, and observance of holy days.[29]

Yahweh dwells with Israel in the holy of holies. All of the priestly ritual focuses on Yahweh and the construction and maintenance of a holy space, but sin generates impurity, as do everyday events such as childbirth and menstruation; impurity pollutes the holy dwelling place. Failure to ritually purify the sacred space could result in God leaving, which would be disastrous.[30]

Through sacrifice, the priest "makes atonement" for sin and the offerer receives forgiveness (but only if God accepts the sacrifice—forgiveness comes only from God).[31] Atonement rituals involve the pouring or sprinkling of blood as the symbol of the life of the victim: the blood has the power to wipe out or absorb the sin.[32] The two-part division of the book structurally reflects the role of atonement: chapters 1–16 call for the establishment of the institution for atonement, and chapters 17–27 call for the life of the atoned community in holiness.[33]

The consistent theme of chapters 17–26 is in the repetition of the phrase, "Be holy, for I the Lord your God am holy."[29] Holiness in ancient Israel had a different meaning than in contemporary usage: it might have been regarded as the "god-ness" of God, an invisible but physical and potentially dangerous force.[34] Specific objects, or even days, can be holy, but they derive holiness from being connected with God—the seventh day, the tabernacle, and the priests all derive their holiness from God.[35] As a result, Israel had to maintain its own holiness in order to live safely alongside God.[36] 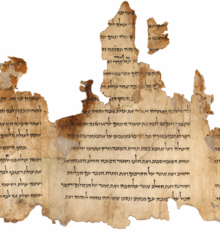 Portion of the Temple Scroll

Leviticus, as part of the Torah, became the law book of Jerusalem's Second Temple as well as of the Samaritan temple. Evidence of its influence is evident among the Dead Sea Scrolls, which included fragments of seventeen manuscripts of Leviticus dating from the third to the first centuries BC.[38] Many other Qumran scrolls cite the book, especially the Temple Scroll and 4QMMT.

Jews and Christians have not observed Leviticus's instructions for animal offerings since the first century AD. Because of the destruction of the temple in Jerusalem in 70 AD, Jewish worship has focused on prayer and the study of Torah. Nevertheless, Leviticus constitutes a major source of Jewish law and is traditionally the first book children learn in the Rabbinic system of education. There are two main Midrashim on Leviticus—the halakhic one (Sifra) and a more aggadic one (Vayikra Rabbah).

The New Testament, particularly the Epistle to the Hebrews, uses ideas and images from Leviticus to describe Christ as the high priest who offers his own blood as a sin offering.[32] Therefore, Christians do not make animal offerings either, as Gordon Wenham summarized: "With the death of Christ the only sufficient "burnt offering" was offered once and for all, and therefore the animal sacrifices which foreshadowed Christ's sacrifice were made obsolete."[39]

Christians generally have the view that the New Covenant supersedes (i.e., replaces) the Old Testament's ritual laws, which includes many of the rules in Leviticus. Christians therefore have usually not observed Leviticus' rules regarding diet, purity, and agriculture. Christian teachings have differed, however, as to where to draw the line between ritual and moral regulations.[40] 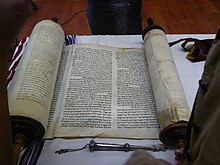