From Wikipedia, the free encyclopedia
Jump to navigation Jump to search
This article is about the constellation. For other uses, see Libra (disambiguation).
Zodiac constellation in the southern celestial hemisphere

Libra /ˈliːbrə/ is a constellation of the zodiac and is located in the Southern celestial hemisphere. Its name is Latin for weighing scales, and its symbol is

(Unicode ♎). It is fairly faint, with no first magnitude stars, and lies between Virgo to the west and Scorpius to the east. Beta Librae, also known as Zubeneschamali, is the brightest star in the constellation. Three star systems are known to have planets. 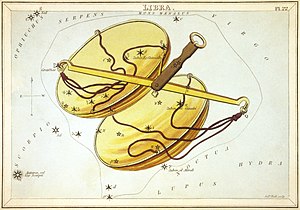 Libra as depicted in Urania's Mirror, a set of constellation cards published in London c.1825

Libra was known in Babylonian astronomy as MUL Zibanu (the "scales" or "balance"), or alternatively as the Claws of the Scorpion. The scales were held sacred to the sun god Shamash, who was also the patron of truth and justice.[1]

It was also seen as the Scorpion's Claws in ancient Greece.[2] Since these times, Libra has been associated with law, fairness and civility. In Arabic zubānā means "scorpion's claws", and likely similarly in other Semitic languages: this resemblance of words may be why the Scorpion's claws became the Scales.[citation needed] It has also been suggested that the scales are an allusion to the fact that when the sun entered this part of the ecliptic at the autumnal equinox, the days and nights are equal.[3] Libra's status as the location of the equinox earned the equinox the name "First Point of Libra", though this location ceased to coincide with the constellation in 730 because of the precession of the equinoxes.[4]

In ancient Egypt the three brightest stars of Libra (α, β, and σ Librae) formed a constellation that was viewed as a boat.[5] Libra is a constellation not mentioned by Eudoxus or Aratus.[3] Libra is mentioned by Manetho (3rd century B.C.) and Geminus (1st century B.C.), and included by Ptolemy in his 48 asterisms. Ptolemy catalogued 17 stars, Tycho Brahe 10, and Johannes Hevelius 20.[3] It only became a constellation in ancient Rome, when it began to represent the scales held by Astraea, the goddess of justice, associated with Virgo in the Greek mythology.[2]

Libra is bordered by the head of Serpens to the north, Virgo to the northwest, Hydra to the southwest, the corner of Centaurus to the southwest, Lupus to the south, Scorpius to the east and Ophiuchus to the northeast. Covering 538.1 square degrees and 1.304% of the night sky, it ranks 29th of the 88 constellations in size.[6] The three-letter abbreviation for the constellation, as adopted by the International Astronomical Union in 1922, is "Lib".[7] The official constellation boundaries, as set by Eugène Delporte in 1930, are defined by a polygon of 12 segments (illustrated in infobox). In the equatorial coordinate system, the right ascension coordinates of these borders lie between  14h 22m 08.08s and  16h 02m 17.23s, while the declination coordinates are between −0.47° and −30.00°.[8] The whole constellation is visible to observers south of latitude 60°N.[a] 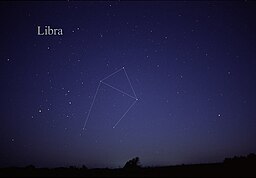 The constellation Libra marked on a naked eye view.

Overall, there are 83 stars within the constellation's borders brighter than or equal to apparent magnitude 6.5.[b][6]

The brightest stars in Libra form a quadrangle that distinguishes it for the unaided observer. Traditionally, Alpha and Beta Librae are considered to represent the scales' balance beam, while Gamma and Sigma are the weighing pans.

Delta Librae is an Algol-type eclipsing variable star, 304 lightyears from Earth. It has a period of 2 days, 8 hours; its minimum magnitude of 5.9 and its maximum magnitude is 4.9. FX Librae, designated 48 Librae, is a shell star of magnitude 4.9. Shell stars, like Pleione and Gamma Cassiopeiae, are blue supergiants with irregular variations caused by their abnormally high speed of rotation. This ejects gas from the star's equator.[2]

Sigma Librae (the proper name is Brachium[10]) was formerly known as Gamma Scorpii despite being well inside the boundaries of Libra. It was not redesignated as Sigma Librae until 1851 by Benjamin A. Gould.

Libra is home to the Gliese 581 planetary system, which consists of the star Gliese 581, three confirmed planets, and two unconfirmed planets. Both Gliese 581d, and Gliese 581g are debatably the most promising candidates for life, although Gliese 581g's existences has been disputed and has not been entirely confirmed or agreed on in the scientific community.[11] Gliese 581c is considered to be the first Earth-like extrasolar planet to be found within its parent star's habitable zone. Gliese 581e is possibly the smallest mass exoplanet orbiting a normal star found to date[12] All of these exoplanets are of significance for establishing the likelihood of life outside of the Solar System.[13]