From Wikipedia, the free encyclopedia
Jump to navigation Jump to search
For other uses, see Lions' Gate (disambiguation).

The Lion Gate was the main entrance of the Bronze Age citadel of Mycenae, southern Greece. It was erected during the 13th century BC, around 1250 BC in the northwest side of the acropolis and is named after the relief sculpture of two lionesses or lions in a heraldic pose that stands above the entrance.[1]

The Lion Gate is the sole surviving monumental piece of Mycenaean sculpture,[2] as well as the largest sculpture in the prehistoric Aegean.[3] It is the only monument of Bronze Age Greece to bear an iconographic motif that survived without being buried underground, and the only relief image which was described in the literature of classical antiquity, such that it was well known prior to modern archaeology.[4]

Stereoscopic image of the gate from 1897.

The greater part of the cyclopean wall in Mycenae, including the Lion Gate itself, was built during the second extension of the citadel which occurred in the Late Helladic period IIIB (13th century BC).[5] At that time, the extended fortifications also included Grave Circle A, the burial place of the 16th-century BC royal families inside the city wall. This grave circle was found east of the Lion Gate, where a peribolos wall was also built.[6] After the expansion, Mycenae could be entered by two gates, a main entrance and a postern,[7][8] while the most extensive feature was undoubtedly the remodeling of the main entrance to the citadel, known as the Lion Gate, in the northwestern side built circa 1250 BC.[9]

The Lion Gate was approached by a natural, partly engineered ramp on a northwest-southeast axis. The eastern side of the approach is flanked by the steep smooth slope of the earlier enceinte. This was embellished with a new facade of conglomerate. On the western side a rectangular bastion was erected, 14.80 m (49 ft) long and 7.23 m (24 ft) wide, built in pseudo-ashlar style of enormous blocks of conglomerate. The term "Cyclopean" was therefore applied to imply that the ancient structures had been built by the legendary race of giants whose culture was presumed to have preceded that of the Classical Greeks, as described in their myths. Between the wall and the bastion, the approach narrows to a small open courtyard measuring 15 m × 7.23 m (49 ft × 24 ft), possibly serving to limit the numbers of attackers on the gate. The bastion on the right side of the gate facilitated defensive actions against the attackers' right hand side, which would normally be vulnerable as they would carry their shields on their left arms. At the end of the approach stands the Lion Gate.[8] 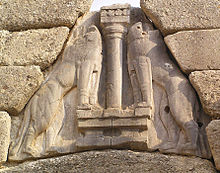 The Lion Gate is a massive and imposing construction, standing 3.10 m (10 ft) wide and 2.95 m (10 ft) high at the threshold. It narrows as it rises, measuring 2.78 m (9 ft) below the lintel. The opening was closed by a double door mortised to a vertical beam that acted as a pivot around which the door revolved.[7]

The gate itself consists of two great monoliths capped with a huge lintel that measures 4.5×2.0×0.8 m (15×7×3 ft). Above the lintel, the masonry courses form a corbelled arch, leaving an opening that lightens the weight carried by the lintel. This relieving triangle is a great limestone slab on which two confronted lionesses or lions carved in high relief stand on either sides of a central pillar. The heads of the animals were fashioned separately and are missing, but their necks are present.[3] The pillar, specifically, is a Minoan-type column that is placed on top of an altar-like platform upon which the lionesses rest their front feet.[9] It has been suggested that lions were not present in Greece at the time showing some sort of hierarchy in power with them fashioned on this monumental gate.[10][dubious – [[Talk:Lion Gate#see History of lions in Europe|discuss]]] 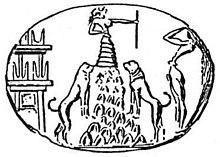 Early imagery of a deity that was found at Knossos presents a goddess flanked clearly by two lionesses, establishing a continuity in religious imagery when later, a deity is represented abstractly by a column. It clearly identifies the species of feline, because of the characteristic tuft at the end of the tail, not present in any other feline species.

Speculation also exists that the animal figures are male lions. One author believes that the Mycenaean artist did not indicate the sex of lions by the genital organs on any artifact known to have been recovered from an excavation. Neither were teats indicated on the body of the lions to indicate they were female. Furthermore, he asserts that on the Lion Gate relief, cuttings on the side of the neck of the lion to the left of the spectator indicate that the animal represented is male, for the cuttings were where the ends of the mane of the animal were fitted to provide additional support to the block, perhaps of steatite, on which the head, face, and mane of the animal were carved. He asserts that the same section of the lion to the right fails to show the same characteristic because it has weathered badly, but that he detects remnants of one cutting which indicate to him that a similar provision was made for the head of that lion. Consequently, he presumes that both animals can be considered lions and not lionesses.[11] Griffins or sphinxes have also been depicted on opposite sides of a column on gems and gold rings but always with wings. The absence of wings also indicates that the animals were probably lions. 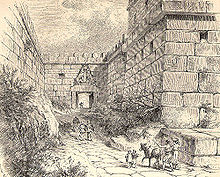 Reconstruction of the Lion Gate

The imposing gate of the citadel with the representation of the lionesses or lions was an emblem of the Mycenaean kings and a symbol of their power to both subjects and foreigners.[9] It also has been argued that the lionesses (assuming they are not male lions) are a symbol of the goddess Hera.[12] The Lion Gate may be compared to the gates of the Hittite Bronze Age citadel of Hattusa, in Asia Minor.[9][13] Since the heads of the animals were of a different material from their bodies and originally were fashioned to look toward those approaching below,[14] a number of scholars have suggested that they were composite beasts, probably sphinxes, in the typical Middle Eastern tradition.[3] On the top of the pillar is a row of four discs, apparently representing rafters supporting a further piece of sculpture that has since been lost.[15] Another view is as follows: above the head of the column and what is probably a slab supporting an architrave is a row of discs (ends of transverse beams) and another slab the same size as the slab on top of the column. The beams and the block above them represent a more extended superstructure shortened here because of the diminishing space in the triangle.[16] Thus, no further piece of sculpture has been lost.

Goddess flanked by two lionesses on a pithos from Knossos

The design of the gate had precedents in other surviving artworks of the time; a similar design was depicted on fifteenth-century Minoan seals and a gem found at Mycenae. On a pithos from Knossos, the same imagery exists depicting a goddess flanked by two lionesses. Many other pieces of Mycenaean artwork share the same basic pattern of two opposed animals separated by a vertical divider, such as two lambs facing a column and two sphinxes facing a sacred tree representing a deity.[15] The architectural design in the gate relief may reflect an entrance of a type characterized by a central support, commonly a single column. More specifically, the gate relief may allude to the propylon (structure which forms the entrance) that provides the main direct access to the palace. The lions acted as guardians to the entrance of the palace. If so, the symbol of a sanctified palace entrance would have appeared above the gate of the fortifications: a double blessing.[16]

Beyond the gate and inside the citadel was a covered court with a small chamber, which probably functioned as a guard post. On the right, adjacent to the wall, was a building that has been identified as a granary because of the pithoi found there containing carbonized wheat.[9]

The Lion Gate stood in full view of visitors to Mycenae for centuries. It was mentioned by the ancient geographer Pausanias in the 2nd century AD.[17] The first correct identification of the Lion Gate in modern literature was during a survey conducted by Francesco Grimani, commissioned by the Provveditore Generale of the Kingdom of the Morea in 1700,[18] who used Pausanias's description of the Lion Gate to identify the ruins of Mycenae.[19][20][21]

In 1840, the Greek Archaeological Society undertook the initial clearing of the site from debris and soil that had accumulated to bury it, and in 1876 Heinrich Schliemann, guided by Pausanias's accounts, excavated the area south of the Lion Gate.[17]