From Wikipedia, the free encyclopedia
Jump to navigation Jump to search
For the use of magic words on Wikipedia, see Help:Magic words. 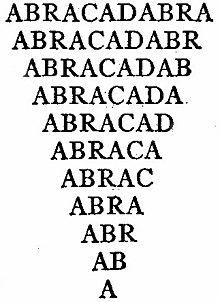 Magic words or words of power are words which have a specific, and sometimes unintended, effect.[1] They are often nonsense phrases used in fantasy fiction or by stage prestidigitators. Frequently such words are presented as being part of a divine, adamic, or other secret or empowered language. Certain comic book heroes use magic words to activate their powers. Magic words are also used as Easter eggs or cheats in computer games, other software, and operating systems (For example, the words xyzzy, plugh, and plover were magic words in the classic computer adventure game Colossal Cave Adventure).

Examples of traditional and modern magic words include:

Craig Conley, a scholar of magic, writes that the magic words used by conjurers may originate from "pseudo-Latin phrases, nonsense syllables, or esoteric terms from religious antiquity", but that what they have in common is "language as an instrument of creation".[14]

Software like MediaWiki uses "magic words" to make system information available to templates and editors, such as {{CURRENTTIME}}, which displays the server time: 12:45, see Help:Magic words.

Hexadecimal "words" used in byte code to identify a specific file or data format are known as magic numbers.

"The Magic Words are Squeamish Ossifrage" was the solution to a challenge ciphertext posed by the inventors of the RSA cipher in 1977.

The term "magic word" may also refer to the word please when used by adults to teach children manners:

"Gimme ketchup right now!"
"What's the magic word?"
"Sorry. May I have some ketchup, please?"

The single word changes an imperative order into a conditional request, concisely communicating "Do as I say, if it pleases you."