From Wikipedia, the free encyclopedia
Jump to navigation Jump to search
This article is about the given name. For the hurricane, see Hurricane Maria. For other uses, see Maria.

Maria is a feminine given name. It is given in many languages influenced by Latin Christianity. It has its origin as the feminine form of the Roman name Marius (see Maria (gens)),[1] and, after Christian religion has spread across the Roman empire, it became the Latinised form of the name of Miriam: Mary, mother of Jesus.

Maria (Μαρία) is a form of the name used in the New Testament, standing alongside Mariam Μαριάμ. It reflects the Syro-Aramaic name Maryam, which is in turn derived from the Biblical Hebrew name Miriam. As a result of their similarity and syncretism, the Latin original name Maria and the Hebrew-derived Maria combined to form a single name.

The name is also sometimes used as a male (middle) name. This was historically the case in many Central European countries and still is the case in countries with strong Catholic traditions, where it signified patronage of the Virgin Mary (French-speakers often did the same with Marie).

Besides Maria, Mother of Jesus there are three other women named Maria in the New Testament: Maria Magdalena and Maria Salomé, disciples of Jesus, and Maria Betânia, sister of Lazarus. In Quranic tradition, the name is rendered Maryam, but Arabic reflects the Christian given name as Mārya مارية or Māryā ماريا; for example, Mārya al-Qibiṭiyya, a Coptic Egyptian woman who was a bondmaid to prophet Muhammad. 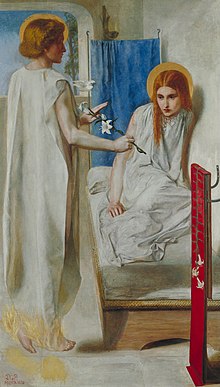 The Annunciation by Dante Gabriel Rossetti, 1850.

Maria was a frequently given name in southern Europe even in the medieval period. In addition to the simple name, there arose a tradition of naming girls after specific titles of Mary, feast days associated with Mary and specific Marian apparitions (such as Maria de los Dolores, Maria del Pilar, Maria del Carmen etc., whence the derived given names of Dolores, Pilar, Carmen etc.). By contrast, in northern Europe the name only rose to popularity after the Reformation.[2]

Spelling variants of Maria include: Mária (Hungarian, Slovakian), María (Greek, Icelandic, Spanish), Máire and Muire (Irish), Marya, Marija (transliterated from Cyrillic), Maria (Polish). Due to a very strong devotion of Irish and Polish Catholics to the Blessed Virgin Mary, a special exception is made for two other forms of her name—Muire and Maryja—no one else may take that name similar to the way the name Jesus is not used in most languages. The English form Mary is derived via French Marie. A great number of hypocoristic forms are in use in numerous languages.

The variant Mariah (usually pronounced /məˈraɪə/) was rarely given in the United States prior to the 1990s, when it bounced in popularity, from rank 562 in 1989 to rank 62 in 1998, in imitation of the name of singer Mariah Carey (whose Vision of Love topped the charts in 1990).

Maria is used as a part of masculine given names in Hispanic and Roman Catholic tradition.