From Wikipedia, the free encyclopedia
(Redirected from Men in Black)
Jump to navigation Jump to search
This article is about "men in black" in UFO conspiracy theories. For the film franchise, see Men in Black (franchise). For other uses, see Men in Black (disambiguation).
Government agents who supposedly intimidate UFO witnesses 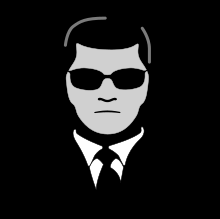 Stylized depiction of a Man in Black

In popular culture and UFO conspiracy theories, men in black (MIB) are supposed men dressed in black suits who claim to be quasi-government agents who harass, threaten or assassinate UFO witnesses to keep them quiet about what they have seen. It is sometimes implied that they may be aliens themselves. The term is also frequently used to describe mysterious men working for unknown organizations, as well as various branches of government allegedly designed to protect secrets or perform other strange activities. The term is generic, used for any unusual, threatening or strangely behaved individual whose appearance on the scene can be linked in some fashion with a UFO sighting.[1] Several alleged encounters with the men in black have been reported by UFO researchers and enthusiasts.

Stories about allegedly real-life men in black inspired the semi-comic science fiction Men in Black franchise of comic books, films and other media.

Folklorist James R. Lewis compares accounts of men in black with tales of people encountering Lucifer and speculates that they can be considered a kind of "psychological drama."[2]

Men in black figure prominently in ufology and UFO folklore. In the 1950s and 1960s, UFOlogists adopted a conspiratorial mindset and began to fear they would be subject to organized intimidation in retaliation for discovering "the truth of the UFOs."[3]

In 1947, Harold Dahl claimed to have been warned not to talk about his alleged UFO sighting on Maury Island by a man in a dark suit. In the mid-1950s, the ufologist Albert K. Bender claimed he was visited by men in dark suits who threatened and warned him not to continue investigating UFOs. Bender maintained that the men in black were secret government agents who had been given the task of suppressing evidence of UFOs. The ufologist John Keel claimed to have had encounters with men in black and referred to them as "demonic supernaturals" with "dark skin and/or 'exotic' facial features." According to the ufologist Jerome Clark, reports of men in black represent "experiences" that "don't seem to have occurred in the world of consensus reality."[4]

Historian Aaron Gulyas wrote, "during the 1970s, 1980s, and 1990s, UFO conspiracy theorists would incorporate the Men in Black into their increasingly complex and paranoid visions."[3]

In his article, "Gray Barker: My Friend, the Myth-Maker," John C. Sherwood claims that, in the late 1960s, at the age of 18, he cooperated when Gray Barker urged him to develop a hoax—which Barker subsequently published—about what Barker called "blackmen," three mysterious UFO inhabitants who silenced Sherwood's pseudonymous identity, "Dr. Richard H. Pratt."[5]

The G-Man from the Half-Life video game franchise is said to have characteristics of the men in black, including an awkward grasp of human speech and mannerisms.