From Wikipedia, the free encyclopedia
Jump to navigation Jump to search
For other uses, see Nehemiah (disambiguation). 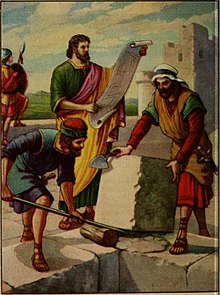 Nehemiah is the central figure of the Book of Nehemiah, which describes his work in rebuilding Jerusalem during the Second Temple period. He was governor of Persian Judea under Artaxerxes I of Persia (465-424 BC).[1][2] The name is pronounced /ˌniːəˈmaɪə/ or /ˌniːhəˈmaɪə/ in English. It is in Hebrew נְחֶמְיָה, Nəḥemyāh, "Yah comforts".[1]

Most scholars believe Nehemiah was a real historical figure and that the Nehemiah Memoir, a name given by scholars to certain portions of the book written in the first person, is historically reliable.[3][4][5]

In the 20th year of Artaxerxes I (445 or 444 BC), Nehemiah was cup-bearer to the king.[6] Learning that the remnant of Jews in Judah were in distress and that the walls of Jerusalem were broken down, he asked the king for permission to return and rebuild the city.[7] Artaxerxes sent him to Judah as governor of the province with a mission to rebuild, letters explaining his support for the venture, and provision for timber from the king's forest.[8] Once there, Nehemiah defied the opposition of Judah's enemies on all sides—Samaritans, Ammonites, Arabs and Philistines—and rebuilt the walls within 52 days, from the Sheep Gate in the North, the Hananeel Tower at the North West corner, the Fish Gate in the West, the Furnaces Tower at the Temple Mount's South West corner, the Dung Gate in the South, the East Gate and the gate beneath the Golden Gate in the East.

Appearing in the Queen's presence[9] may indicate him being a eunuch,[10] and in the Septuagint, the Greek translation of the Hebrew Bible, he is described as such: eunochos (eunuch), rather than oinochoos (wine-cup-bearer). If so the attempt by his enemy Shemaiah to trick him into entering the Temple is aimed at making him break Jewish law, rather than simply hide from assassins.[11]

He then took measures to repopulate the city and purify the Jewish community, enforcing the cancellation of debt, assisting Ezra to promulgate the law of Moses, and enforcing the divorce of Jewish men from their non-Jewish wives. 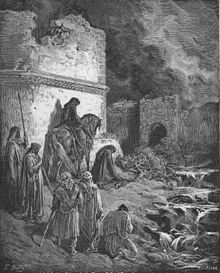 After 12 years as governor, during which he ruled with justice and righteousness, he returned to the king in Susa. After some time in Susa he returned to Jerusalem, only to find that the people had fallen back into their evil ways. Non-Jews were permitted to conduct business inside Jerusalem on the Sabbath and to keep rooms in the Temple. Greatly angered, he purified the Temple and the priests and Levites and enforced the observance of the law of Moses.

2 Maccabees assigns several roles to the subject which is not attested elsewhere.[12] In 2 Maccabees 2:13 the subject founded the library of the Second Temple along with Judas Maccabeus.

Nehemiah is identified in one aggadah with Zerubbabel, the latter name being considered an epithet of Nehemiah and as indicating that he was born at Babylon.[13] However, rabbi Isaiah di Trani, in his commentary to the book of Nehemiah, writes as factual that Nehemiah was a Kohen.[14]

With Ezra, Nehemiah marks the spring-time in the national history of Judaism (Cant. R. ii. 12). A certain mishnah is declared by the Rabbis to have originated in the school of Nehemiah (Shab. 123b). Still, Nehemiah is blamed by the Rabbis for his seemingly boastful expression, "Think upon me, my God, for good" (Neh. v. 19, xiii. 31), and for his disparagement of his predecessors (ib. v. 15), among whom was Daniel. The Rabbis think that these two faults were the reason that this book is not mentioned under its own name, but forms part of the Book of Ezra (Sanh. 93b). [The division of the book into two is a Christian development.] According to Baba Bathra 15a Nehemiah completed the Book of Chronicles, which was written by Ezra.[15]

Samuel Taylor Coleridge commented on the dearth of a classical painting featuring Nehemiah.[16]