From Wikipedia, the free encyclopedia
Jump to navigation Jump to search
Romance language

Norman or Norman French (Normaund, French: Normand, Guernésiais: Normand, Jèrriais: Nouormand) is, depending on classification, either a French dialect or a Romance language which can be classified as one of the Oïl languages along with French, Picard and Walloon. The name "Norman French" is sometimes used to describe not only the Norman language, but also the administrative languages of Anglo-Norman and Law French used in England. For the most part, the written forms of Norman and modern French are mutually intelligible. This intelligibility was largely caused by the Norman language's planned adaptation to French orthography.

When Norse invaders from modern day Denmark, Norway and Sweden arrived in the then-province of Neustria and settled the land that became known as Normandy, these Germanic-speaking people came to live among a local Romance-speaking population. In time, the communities converged, so that Normandy continued to form the name of the region while the original Normans became assimilated by the Gallo-Romance people, adopting their speech. Later, when conquering England, the Norman rulers in England would eventually assimilate, thereby adopting the speech of the local English. However, in both cases, the élites contributed elements of their own language to the newly enriched languages that developed in the territories.

In Normandy, the Norman language inherited only some 150 words from Old Norse.[3] The influence on phonology is disputed, although it is argued that the retention of aspirated /h/ and /k/ in Norman is due to Norse influence.

Norman is spoken in mainland Normandy in France, where it has no official status, but is classed as a regional language. It is taught in a few colleges near Cherbourg-Octeville.

In the Channel Islands, the Norman language has developed separately, but not in isolation, to form:

The British and Irish governments recognize Jèrriais and Guernésiais as regional languages within the framework of the British–Irish Council. Sercquiais is in fact a descendant of the 16th-century Jèrriais used by the original colonists from Jersey who settled the then uninhabited island.

The last first-language speakers of Auregnais, the dialect of Norman spoken on Alderney, died during the 20th century, although some rememberers are still alive. The dialect of Herm also lapsed at an unknown date; the patois spoken there was likely Guernésiais (Herm was not inhabited all year round in the Norman culture's heyday).

An isogloss termed the "Joret line" (ligne Joret) separates the northern and southern dialects of the Norman language (the line runs from Granville, Manche to the French-speaking Belgian border in the province of Hainaut and Thiérache). Dialectal differences also distinguish western and eastern dialects.[citation needed]

Three different standardized spellings are used: continental Norman, Jèrriais, and Dgèrnésiais. These represent the different developments and particular literary histories of the varieties of Norman. Norman may therefore be described as a pluricentric language.

The Anglo-Norman dialect of Norman served as a language of administration in England following the Norman conquest of England in 1066. This left a legacy of Law French in the language of English courts (though it was also influenced by Parisian French). In Ireland, Norman remained strongest in the area of south-east Ireland, where the Hiberno-Normans invaded in 1169. Norman remains in (limited) use for some very formal legal purposes in the UK, such as when the monarch gives royal assent to an Act of Parliament using the phrase, "La Reyne (le Roy) le veult" ("The Queen (the King) wills it").

The Norman conquest of southern Italy in the 11th and 12th centuries brought the language to Sicily and the southern part of the Italian Peninsula, where it may have left a few words in the Sicilian language. See: Norman and French influence on Sicilian.

As of 2017[update] the Norman language remains strongest in the less accessible areas of the former Duchy of Normandy: the Channel Islands and the Cotentin Peninsula (Cotentinais) in the west, and the Pays de Caux (Cauchois dialect) in the east. Ease of access from Paris and the popularity of the coastal resorts of central Normandy, such as Deauville, in the 19th century led to a significant loss of distinctive Norman culture in the central low-lying areas of Normandy.

In some cases, Norse words adopted in Norman have been borrowed into French – and more recently some of the English words used in French can be traced back to Norman origins. 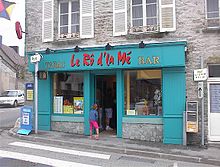 A bar named in Norman

Following the Norman conquest of England in 1066, the Norman and other languages and dialects spoken by the new rulers of England were used during several hundred years, developing into the unique insular dialect now known as Anglo-Norman French, and leaving traces of specifically Norman words that can be distinguished from the equivalent lexical items in French:

Other borrowings, such as captain, kennel, cattle and canvas, exemplify how Norman retained Latin /k/ that was not retained in French.

In the United Kingdom, Acts of Parliament are confirmed with the words "La Reyne le veult" ("The Queen wishes it"), or "Le Roy le veult ("The King wishes it") and other Norman phrases are used on formal occasions as legislation progresses.[7]

Norman immigrants to North America also introduced some "Normanisms" to Quebec French and the French language in Canada generally. Joual, a working class sociolect of Quebec, in particular exhibits a Norman influence.