From Wikipedia, the free encyclopedia
(Redirected from Nun (Bible))
Jump to navigation Jump to search 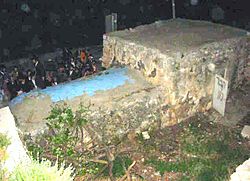 Nun /ˈnʊn/, in the Hebrew Bible, was a man from the Tribe of Ephraim, grandson of Ammihud, son of Elishama, and father of Joshua (1 Chronicles 7:26-27).

Nun grew up in and may have lived his entire life in the Israelites' Egyptian captivity, where the Egyptians "made life bitter for them with harsh labor at mortar and bricks and with all sorts of tasks in the field" (Exodus 1:14). In Aramaic, "nun" means "fish". Thus the Midrash tells: "[T]he son of him whose name was as the name of a fish would lead them [the Israelites] into the land" (Genesis Rabba 97:3).

Tradition places Nun's tomb near that of his son Joshua who, according to Joshua 24:30, is buried in Timnat Serah whereas in Judges 2:9 it is mentioned as Timnath-heres. The similarly named Palestinian village of Kifl Hares/Timnat Hares, located northwest of Ariel in Samaria (Northern West Bank), now encircles both tombs.