From Wikipedia, the free encyclopedia
Jump to navigation Jump to search
This article is about the deities in Egyptian mythology. For the concept in Gnosticism, see Ogdoad (Gnosticism). 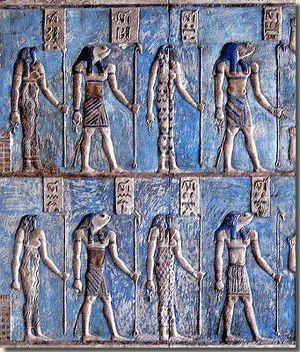 A depiction of the Ogdoad from a Roman era relief at the Hathor temple in Dendera. Some have frog heads and others have serpent heads. 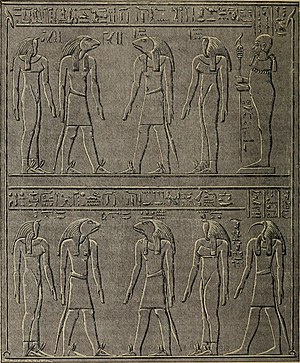 Drawing of a representation of the Ogdoad in the temple of Philae.[1]

References to the Ogdoad date to the Old Kingdom of Egypt, and even at the time of composition of the Pyramid Texts towards the end of the Old Kingdom, they appear to have been antiquated and mostly forgotten by everyone except religious experts. They are frequently mentioned in the Coffin Texts of the Middle Kingdom. The oldest known pictorial representations of the group do not predate the time of Seti I (New Kingdom, 13th century BC), when the group appears to be rediscovered by the theologians of Hermopolis for the purposes of a more elaborate creation account.[2]

Texts of the Late Period describe them as having the heads of frogs (male) and serpents (female), and they are often depicted in this way in reliefs of the Ptolemaic Kingdom.[3]

The eight deities were arranged in four male-female pairs. The female names are derivative of the male names.[4]

The names of Nu and Naunet are written with the determiners for sky and water, and it seems clear that they represent the primordial waters.

The fourth pair appears with varying names; sometimes the name Qerḥ is replaced by Ni, Nenu, Nu, or Amun, and the name Qerḥet by Ennit, Nenuit, Nunu, Nit, or Amunet. The common meaning of qerḥ is "night", but the determinative (D41 for "to halt, stop, deny") also suggests the principle of inactivity or repose.[5]

Ḥeḥu and Ḥeḥut have no readily identifiable determiners; according to a suggestion due to Brugsch (1885), the name is associated with a term for an undefined or unlimited number, ḥeḥ, suggesting a concept similar to Greek aion. But from the context of a number of passages in which Ḥeḥu is mentioned, Brugsch also suggested that he may be a personification of the atmosphere between heaven and earth (c.f. Shu).

The names of Kekui and Kekuit are written with a determiner combining the sky hieroglyph with a staff or scepter used for words related to darkness and obscurity, and kkw as a regular word means "darkness", suggesting that these gods represent primordial darkness, comparable to Greek Erebus, but in some aspects they appear to represent day as well as night, or the change from night to day and from day to night.

The fourth pair has no consistent attributes as it appears with varying names. The common meaning of qerḥ is "night", but the determinative (D41 for "to halt, stop, deny") also suggests the principle of inactivity or repose.[6]

There is no obvious way to allot or attribute four functions to the four pairs of gods, and it seems clear that "the ancient Egyptians themselves had no very clear idea" regarding such functions.[7] Nevertheless, there have been attempts to assign "four ontological concepts"[8] to the four groups. For example, in the context of the New Kingdom, Karenga (2004) uses "fluidity" (for "flood, waters"), "darkness", "unboundedness" and "invisibility" (for "repose, inactivity").[9]