From Wikipedia, the free encyclopedia
(Redirected from Old Catalan language)
Jump to navigation Jump to search

Old Catalan was the Romance variety spoken in territories that spanned roughly the territories of the Principality of Catalonia, the Kingdom of Valencia, the Balearic Islands, and the island of Sardinia; all of them then part of the Crown of Aragon.

It is believed that Old Catalan had two lateral palatal phonemes. One, /ʎ/, was written as ⟨ll⟩ and has remained unchanged. The other, reconstructed as /jl/, came from the Latin groups C'L, G'L, LE, and LI; written as ⟨yl⟩ and ⟨il⟩, it never appeared in initial position. It has merged into /ʎ/ in most dialects but into /j/ in a few dialects.[5]

Around the 12th century, word-initial /l/ became /ʎ/, but it continued to be spelled as ⟨l⟩ until the 15th century.[6]

/v/ began to merge into /b/ in some dialects around the 14th century, a process called betacism.[7] Now, the distinction is maintained only in Valencia, the Balearic Islands, and southern Tarragona.[8]

It is assumed that during the preliterary period, all Catalan dialects featured a weak realization of the pretonic vowels. Around the 13th century, pretonic /a/ and /e/ began to be confused in writing in the Eastern dialects, and the confusion later spread to all unstressed instances of /a/ and /e/, a process that was almost complete by the 15th century.[10][11]

Final post-tonic /e, o/ were lost[12] during the formation of Catalan. According to some historic studies,[13] final nasals were velarised and assimilated before being lost in Modern Catalan: [ˈpãŋ] → [ˈpã] → [ˈpa]).

Current Catalan orthography is mostly based on mediaeval practice, but some of the pronunciations and conventions have changed. 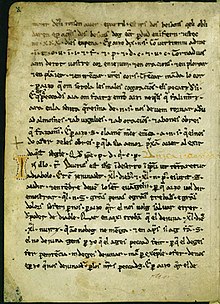 By the 9th century, the Catalan language had developed from Vulgar Latin on both sides of the eastern end of the Pyrenees mountains (counties of Rosselló, Empúries, Besalú, Cerdanya, Urgell, Pallars and Ribagorça), as well as in the territories of the Roman province and later archdiocese of Tarraconensis to the south.[14] From the 8th century on, the Catalan counts extended their territory southwards and westwards, conquering territories then occupied by Muslims, bringing their language with them.[14]

This phenomenon gained momentum with the separation of the County of Barcelona from the Carolingian Empire in 988 AD.[14] By the 9th century, the Christian rulers occupied the northern parts of present-day Catalonia, usually termed "Old Catalonia", and during the 11th and 12th centuries they expanded their domains to the region north of the Ebro river, a land known as "New Catalonia".[14] During the 13th century, the Catalans expanded to the Land of Valencia and across to the Balearic Islands and Alghero in Sardinia.[14]

Lines 1–4. Passages in Catalan in italics

According to historian Jaume Villanueva (1756–1824), the first attested Catalan sentence is thought to be found in an 8th-century manuscript from Ripoll that has since been lost. It was a whimsical note in 10th- or early 11th-century calligraphy: Magister m[eu]s no vol que em miras novel ("my master does not want you to watch me, newbie").[17]

During the 11th century, several feudal documents (especially oaths and complaints) written in macaronic Latin began to exhibit elements of Catalan, with proper names or even sentences in Romance.[18] Of special historical and linguistic importance is the Memorial of Complaints of Ponç I[19] (ca. 1050–1060), featuring whole sentences in Romance.[18] By the end of the 11th century, documents written completely or mostly in Catalan begin to appear, like the Complaints of Guitard Isarn, Lord of Caboet (ca. 1080–1095), or The Oath of peace and truce of count Pere Ramon (1098).[18] Catalan shares many features with Gallo-Romance languages, which are mostly located in France and Northern Italy. Old Catalan diverged from Old Occitan between the 11th and 14th centuries.[20]

Catalan lived a golden age during the Late Middle Ages, reaching a peak of maturity and cultural plenitude.[14] Examples of this can be seen in the works of Majorcan polymath Ramon Llull (1232–1315), the Four Great Chronicles (13th-14th centuries), and the Valencian school of poetry which culminated in Ausiàs March (1397–1459).[14]

By the 15th century, the city of Valencia had become the center of social and cultural dynamism, and Catalan was present all over the Mediterranean world.[14] The belief that political splendor was correlated with linguistic consolidation was voiced through the Royal Chancery, which promoted a highly standardized language.[14]

The outstanding[14] novel of chivalry Tirant lo Blanc (1490), by Joanot Martorell, shows the transition from medieval to Renaissance values, something than can also be seen in the works of Bernat Metge and Andreu Febrer.[14] During this period, Catalan was what Costa Carreras terms "one of the 'great languages' of medieval Europe".[14] The flowering of the Renaissance was closely associated with the advent of the printing press, and the first book produced with movable type in the Iberian Peninsula was printed in Valencia in 1474: Trobes en llaors de la Verge maria ("Poems of praise of the Virgin Mary").[14]