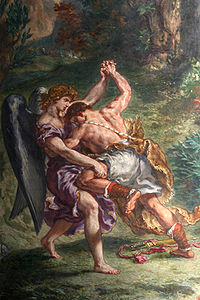 Depiction of Jacob Wrestling with the Angel at Penuel, by Eugène Delacroix.

In the Hebrew Bible, Penuel (or Pniel, Pnuel; Hebrew: פְּנוּאֵל) is a place not far from Succoth, on the east of the Jordan River and south of the river Jabbok. It is also called Peniel "Face of God" by Jacob:

It is because I saw God face to face, and yet my life was spared.

A town was afterward built there (Judg. 8:8; 1 Kings 12:25). The men of this place refused to give bread to Gideon and his 300 men when they were in pursuit of the Midianites (Judg. 8:1-21). On his return, Gideon tore down the tower there and killed all the men of the city.

When the Northern Kingdom of Israel broke away from the United Monarchy c. 930 BCE, Jeroboam, its first king, established his capital in Shechem. A short time later, he left Shechem and fortified Penuel, declaring it as his new capital (I Kings 12:25). He and his son, Nadab, ruled there, until Baasha seized the throne in 909 BCE and moved the capital to Tirzah (I Kings 15:25–34).

Pnuel is a common name given to males in the Assyrian culture.

Vayishlach, the Torah reading describing the events at Penuel.