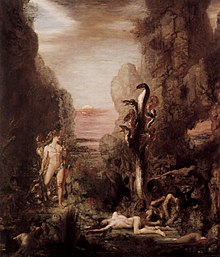 Heracles and the Lernaean Hydra by Gustave Moreau: The Hydra is perhaps the best known mythological multi-headed animal, also popularised in many fantasy settings.

Polycephaly is the condition of having more than one head. The term is derived from the Greek stems poly (Greek: "πολύ") meaning "many" and kephalē (Greek: "κεφαλή") meaning "head". A polycephalic organism may be thought of as one being with a supernumerary body part, or as two or more beings with a shared body.

Two-headed animals (called bicephalic or dicephalic) and three-headed (tricephalic) animals are the only type of multi-headed creatures seen in the real world, and form by the same process as conjoined twins from monozygotic twin embryos.

There are many occurrences of multi-headed animals in mythology. In heraldry and vexillology, the double-headed eagle is a common symbol, though no such animal is known to have ever existed. 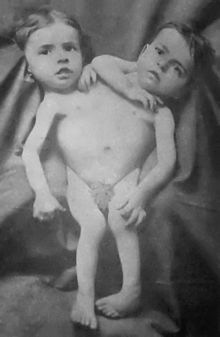 The Tocci brothers as young boys in 1881.

Two-headed people and animals, though rare, have long been known to exist and documented. 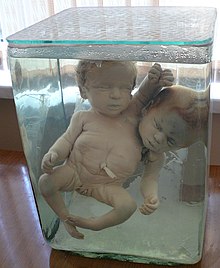 In humans, as in other animals, partial twinning can result in formation of two heads supported by a single torso. Two ways this can happen are dicephalus parapagus, where there are two heads side by side, and craniopagus parasiticus, where the heads are joined directly.

In dicephalus parapagus dipus, the two heads are side by side, on a torso with two legs, with varying levels of twinning of organs and structures within the torso. The shared body may have four arms altogether, or three arms, or two arms only. There are Greek-based medical terms for the variations, e.g. dibrachius means two-armed, tribrachius means three-armed. Both heads may contain a fully formed brain, or one may be anencephalic.[1] If carried to term, dicephalus parapagus twins are usually stillborn, or die soon after birth. Survival to adulthood does however occasionally occur in cases where the twins are born with three to four arms.[2] Chances of survival are improved if two complete hearts are present.[3] Separation surgery is contraindicated, except in cases where one of the twins is clearly dying.[4]

Giacomo and Giovanni Battista Tocci (born between 1875 and 1877), were dicephalus parapagus dipus twins who survived to adulthood. Each had his own pair of arms. They learned to speak several languages, but never learned to walk. Abigail and Brittany Hensel, born in 1990, are another instance of dicephalus parapagus dipus twins who grew up. They were born with two functional arms, plus a vestigial third arm, which was surgically removed. Each twin has her own complete head, heart and spine, and controls one arm and one leg. They developed good motor skills, and completed courses at school and university.[5]

Drawing of the eighteenth century Boy of Bengal, affected by craniopagus parasiticus.

Polycephalic animals often make local news headlines when found. The most commonly observed two-headed animals are turtles and snakes.[6] Other species with known two-headed occurrences include cattle, sheep, pigs, cats, dogs, and fish. In 1894, a two-headed partridge was reported in Boston, Massachusetts.[7] It was notable as a dicephalic animal for surviving into adulthood with two perfect heads. Scientists have published in modern journals about dissecting such animals since at least the 1930s.[6] A 1929 paper studied the anatomy of a two-headed kitten.[6]

Polycephalic animals, due to their rarity, are a subject of novelty. "We", a two-headed albino rat snake born in captivity in 2000 with both female and male genitalia, was scheduled to be auctioned on eBay with an expected price tag of $150,000 (£87,000), though their policy of not trading in live animals prevented the sale.[8][9] On October 31, 2006, the World Aquarium[10] announced that "We" was adopted by Nutra Pharma Corporation, a biotechnology company developing treatments using modified cobra venom and cobratoxin.[11] "We" died of natural causes at age eight in June 2007, not long after being acquired by Nutra Pharma.[9]

In cases where multiple heads are fully developed and non-parasitic, they share control of the organs and limbs, though the specific structure of the connections varies. Animals often move in a disoriented and dizzy fashion, with the brains "arguing" with each other; some animals simply zig-zag without getting anywhere.[15] Snake heads may attack and even attempt to swallow each other. Thus, polycephalic animals survive poorly in the wild compared to normal monocephalic animals.

Most two-headed snakes only live for a few months, though some have been reported to live a full life and even reproduced, with the offspring born normal. A two-headed black rat snake with separate throats and stomachs survived for 20 years. A two-headed albino rat snake named "We" survived in captivity for 8 years.[16] There is some speculation that the inbreeding of snakes in captivity increases the chances of a two-headed birth.[17]

It is difficult to draw the line between what is considered "one animal with two heads" or "two animals that share a body".

Abigail and Brittany Hensel were given two distinct names at birth. They identify as two people, and are recognised as two people legally and socially.[18] On the other hand, Syafitri, born 2006 in Indonesia, were given one name by their parents because they only had one heart.[19] In early Germany, conjoined twins that could not be separated were legally considered a single entity.[20] Some questions that can arise when considering the legal, moral, and ethical implications of polycephaly in humans are: If one twin commits a crime, should the innocent half be sent to prison along with the guilty half? What if the twins possess different tastes? Is it a crime if one objects to romantic advances? If one twin commits suicide, how can it be determined to not be murder? What if one twin is asleep and the other is awake? Is it academic dishonesty if one tells the other answers to a test? With other animals, polycephaly is usually described as "one animal with two heads".[8][21] One of the heads, especially in three-headed animals, may be poorly developed and malformed, and not "participate" much.[15]

Two faces on one head[edit]

Where twinning of the head itself is only partial, it can result in the condition known as diprosopus—one head with two faces.

The February 22, 2007, issue of the journal Biology Letters detailed the discovery of a 122 million-year-old fossil of a two-headed Hyphalosaurus lingyuanensis, marking the earliest known occurrence of axial bifurcation.[22]

Craniopagus parasiticus is a condition in which a parasitic twin head with an undeveloped or underdeveloped body is attached to the head of a developed twin. Recorded cases include: 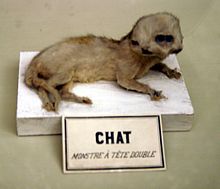 Polycephalic cats in museums include: 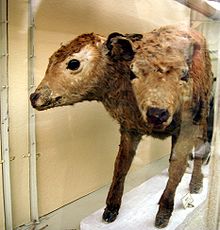 A full body taxidermy of a two-headed calf is on display at the Garth and Jerri Frehner Museum of Natural History on the Southern Utah University campus in Cedar City, Utah. "The Dancing Calves" were born by natural delivery with considerable assistance from S. T. Nelson of Cedar City, Utah on Mother's Day, May 8, 1949, to a crossbred cow owned by Willard Lund of Paragonah, Utah. The "Father Bull" is unknown but must have been an outstanding Hereford. The double calf was alive and healthy but died during birth. This calf, or calves, joined together from the beginning of the neck as far as the belly, with two complete, almost perfect body frames, had but one system of vital organs. Each of the two normal heads had a food channel to one stomach and a breathing channel, or windpipe, to the one set of lungs. The two briskets, or breasts, shared on each side by these calves, contained the one set of lungs on one side and the one heart on the other side. Branching off from the one stomach and digestive system were two channels of elimination. This calf weighed approximately 85 pounds at birth. The over-all measurements as it stands mounted are: 42.5 inches high, 20 inches from tail to tail, and 18 inches from side to side including the front legs. The "Mother Cow" lived and was sold as a "fat cow" in July 1949. This calf was stuffed by Mr. C. J. Sanders, taxidermist, 2631 South State Street, Salt Lake City 5, Utah, who stated that it is the most unusual monstrosity he has ever worked with. Dr. A. C. Johnson, of Cedar City, Utah, stated that this is the best specimen of monstrosity in animal life that he has ever seen or heard of in his 47 years of practice as a veterinarian. "The Dancing Calves" were owned by West and Gail Seegmiller who displayed them for many years at their Desert Pearl Cafe (no longer in existence), in Cedar City, Utah. Dr. A. C. Johnson, Dr. T. Donald Bell, William H. Lund, Dr. R. G. Williams, Dr. J. S. Prestwich, Dr. A. L. Graff, S. T. Nelson, and James Hoyle, Jr. all signed as witnesses that they saw the calf in the flesh soon after birth and knew it to be authentic. The calves and original document were donated to the Garth and Jerri Frehner Museum of Natural History on the Southern Utah University campus in Cedar City, Utah, where they are now on display. 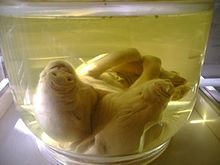 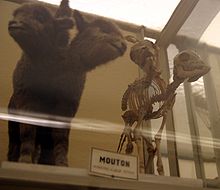 Most polycephalic snakes do not live long, but some captive individuals do.[47]

The Greek tortoise "Janus", is born in 1997 in the Museum of Natural History of Geneva, pictured here in 2008.

Two-headed turtles and tortoises are rare but not unknown. Recent discoveries include:

In 2006, the UK Royal Society announced that it had discovered a two-headed fossil of Hyphalosaurus, the first recorded time that such a reptile has been found fossilized. 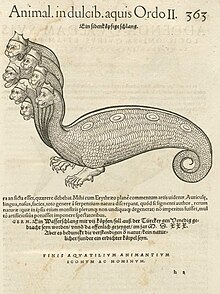 The 16th-century German zoologist Conrad Gesner has been influenced by the Beast of Revelation in his depiction of the Hydra in volume four of Historiae Animalium.

Greek mythology contains a number of multi-headed creatures. Typhon, a vast grisly monster with many snake heads, is often described as having several offspring with Echidna, a creature with the lower body of a serpent but the upper body of a beautiful woman. Their offspring, by one source or another, account for many of the major monsters of Greek mythos, including:

Other multi-headed creatures in Greek mythology include:

Zahhak, an evil figure in Iranian mythology - also evident in ancient Iranian folklore as Aži Dahāka (Azh dahak) - is the most significant and long-lasting of the ažis of the Avesta, the earliest religious texts of Zoroastrianism. He is described as a monster with three mouths, six eyes, and three heads (presumably meaning three heads with one mouth and two eyes each), cunning, strong and demonic. But in other respects Aži Dahāka has human qualities, and is never a mere animal. Vishnu reclines on the multi-hooded serpent Shesha, while the four-headed Brahma sits on a lotus, rising from Vishnu's navel.

Hindu deities are often depicted with multiple arms or heads.

Though usually depicted with one head, some deities like Ganesha (in Heramba form) and Shiva (Sadashiva) have aspects where they are depicted with multiple heads; five in this case. The Vishvarupa form of Vishnu is described as having infinite heads.

Besides deities, demons (asura and rakshasa) may be depicted with multiple heads. The demon-king Ravana is depicted with ten heads; while his son Trishira with three heads. 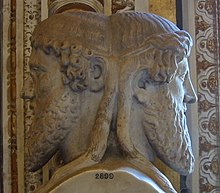 The Talmud (Brachot 61a) says that originally Adam was created as a single body with two faces (which were then separated into two bodies - male (Adam) & female (Eve)).[65][66]

The Talmud (Menachot 37a) records an incident in which Phlimo asked Judah the Prince, which head a two headed person should put on Tefillin. Judah was initially dismissive, but then another man came in saying that his wife had just given birth to a two headed baby, and asked a (different) halachic question.[69][70]