From Wikipedia, the free encyclopedia
Jump to navigation Jump to search
For other uses, see Proserpina (disambiguation).

Proserpina (/proʊˈsɜːrpɪnə/ proh-SUR-pin-ə,[1] Latin: [proːˈsɛrpɪna]) or Proserpine (/proʊˈsɜːrpɪni, ˈprɒsərpaɪn/ proh-SUR-pin-ee, PROSS-ər-pyne[1]) is an ancient Roman goddess whose cult, myths and mysteries were combined from those of Libera, an early Roman goddess of wine, and the Greek Persephone and Demeter, goddesses of grain and agriculture. The originally Roman goddess Libera was daughter of the agricultural goddess Ceres and wife to Liber, god of wine and freedom. In 204 BC, a new "Greek-style" cult to Ceres and Proserpina as "Mother and Maiden" was imported from southern Italy, along with Greek priestesses to serve it, and was installed in Libera and Ceres' temple on Rome's Aventine Hill. The new cult and its priesthood were actively promoted by Rome's religious authorities as morally desirable for respectable Roman women, and may have partly subsumed the temple's older, native cult to Ceres, Liber and Libera; but the new rites seem to have functioned alongside the old, rather than replaced them.

Just as Persephone was thought to be a daughter of Demeter, Romans made Proserpina a daughter of Demeter's Roman equivalent, Ceres. Like Persephone, Proserpina is associated with the underworld realm and its ruler; and along with her mother Ceres, with the springtime growth of crops and the cycle of life, death and rebirth or renewal. Her name is a Latinisation of "Persephone", perhaps influenced by the Latin proserpere ("to emerge, to creep forth"), with respect to the growing of grain. Her core myths – her forcible abduction by the god of the Underworld, her mother's search for her and her eventual but temporary restoration to the world above – are the subject of works in Roman and later art and literature. In particular, Proserpina's seizure by the god of the Underworld – usually described as the Rape of Proserpina, or of Persephone – has offered dramatic subject matter for Renaissance and later sculptors and painters.

In early Roman religion, Libera was the female equivalent of Liber ('the free one'). She was originally an Italic goddess; at some time during Rome's Regal or very early Republican eras, she was paired with Liber, also known as Liber Pater ('the free father'), Roman god of wine, male fertility, and a guardian of plebeian freedoms.[2] She enters Roman history as part of a Triadic cult alongside Ceres and Liber, in a temple established on the Aventine Hill around 493 BC. The location and context of this early cult mark her association with Rome's commoner-citizens, or plebs; she might have been offered cult on March 17 as part of Liber's festival, Liberalia, or at some time during the seven days of Cerealia (mid- to late April); in the latter festival, she would have been subordinate to Ceres. Otherwise, her relationship to her Aventine cult partners is uncertain; she has no known native mythology.

Libera was officially identified with Proserpina in 205 BC, when she acquired a Romanised form of the Greek mystery rites and their attendant mythology. In the late Republican era, Cicero described Liber and Libera as Ceres' children. At around the same time, possibly in the context of popular or religious drama, Hyginus equated her with Greek Ariadne, as bride to Liber's Greek equivalent, Dionysus.[3] The older and newer forms of her cult and rites, and their diverse associations, persisted well into the late Imperial era. St. Augustine (AD 354 – 430) observed that Libera is concerned with female fertility, as Liber is with male fertility.[4]

Proserpina was officially introduced to Rome around 205 BCE, along with the ritus graecia cereris (a Greek form of cult dedicated to her mother Ceres), as part of Rome's general religious recruitment of deities as allies against Carthage, towards the end of the Second Punic War. The cult originated in southern Italy (part of Magna Graecia) and was probably based on the women-only Greek Thesmophoria, a mystery cult to Demeter and Persephone as "Mother and Maiden". It arrived along with its Greek priestesses, who were granted Roman citizenship so that they could pray to the gods "with a foreign and external knowledge, but with a domestic and civil intention".[5] The new cult was installed in the already ancient Temple of Ceres, Liber and Libera, Rome's Aventine patrons of the plebs; from the end of the 3rd century BC, Demeter's temple at Enna, in Sicily, was acknowledged as Ceres' oldest, most authoritative cult centre, and Libera was recognised as Proserpina, Roman equivalent to Demeter's daughter Persephone.[6] Their joint cult recalls Demeter's search for Persephone, after the latter's rape and abduction into the underworld by Hades (or Pluto). At the Aventine, the new cult took its place alongside the old. It made no reference to Liber, whose open and gender-mixed cult continued to play a central role in plebeian culture, as a patron and protector of plebeian rights, freedoms and values. The exclusively female initiates and priestesses of the new "Greek-style" mysteries of Ceres and Proserpina were expected to uphold Rome's traditional, patrician-dominated social hierarchy and traditional morality. Unmarried girls should emulate the chastity of Proserpina, the maiden; married women should seek to emulate Ceres, the devoted and fruitful Mother. Their rites were intended to secure a good harvest, and increase the fertility of those who partook in the mysteries.[7]

A Temple of Proserpina was located in a suburb of Melite, in modern Mtarfa, Malta. The temple's ruins were quarried between the 17th and 18th centuries, and only a few fragments survive.[8]

The Rape of Proserpina by Hans von Aachen (1587) 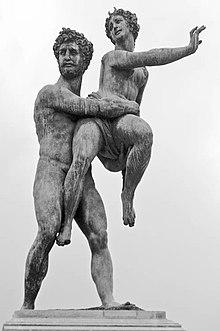 Copy of The Rape of Proserpina by Vincenzo de' Rossi [it], on view near Cliveden House

The best-known myth surrounding Proserpina is of her abduction by the god of the Underworld, her mother Ceres' frantic search for her, and her eventual but temporary restitution to the world above. In Latin literature, several versions are known, all similar in most respects to the myths of Greek Persephone's abduction by the King of the underworld, named variously in Greek sources as Hades or Pluto. "Hades" can mean both the hidden Underworld and its king ('the hidden one'), who in early Greek versions of the myth is a dark, unsympathetic figure; Persephone is "Kore" ('the maiden'), taken against her will;[9] in the Greek Eleusinian Mysteries, her captor is known as Pluto; they form a divine couple who rule the underworld together, and receive Eleusinian initiates into some form of better afterlife. Renamed thus, the king of the underworld is distanced from his consort's violent abduction.[10] In the early 1st century CE, Ovid gives two poetic versions of the myth in Latin: one in Book 5 of his Metamorphoses (Book 5) and another in Book 4 of his Fasti.[11] An early 5th century Latin version of the same myth is Claudian's De raptu Proserpinae; in most cases, these Latin works identify Proserpina's underworld abductor and later consort by the Roman god of the underworld's traditional Latin name, Dis.

Venus, in order to bring love to Pluto, sent her son Amor (also known as Cupid) to hit Pluto with one of his arrows. Proserpina was in Sicily, at the Pergusa Lake near Enna, where she was playing with some nymphs and collecting flowers, when Pluto came out from the volcano Etna with four black horses named Orphnaeus, Aethon, Nycteus and Alastor.[12] He abducted her in order to marry her and live with her in the underworld of which he was the ruler.

Her mother Ceres, also known as Demeter, the goddess of agriculture or of the Earth, went looking for her across all of the world, and all in vain. She was unable to find anything but a small belt floating upon a little lake made from the tears of the nymphs. In her desperation, Ceres angrily stopped the growth of fruits and vegetables, bestowing a malediction on Sicily. Ceres refused to return to Mount Olympus and started walking the Earth, creating a desert with each step.

Worried, Jupiter sent Mercury to order Pluto (Jupiter's brother) to free Proserpina. Pluto obeyed, but before letting her go he made her eat six pomegranate seeds, because those who have eaten the food of the dead could not return to the world of the living. This meant that she would have to live six months of each year with him, and stay the rest with her mother. This story was undoubtedly meant to illustrate the changing of the seasons: when Ceres welcomes her daughter back in the spring the earth blossoms, and when Proserpina must be returned to her husband it withers.

In another version of the story, Proserpina ate only four pomegranate seeds, and she did so of her own accord. When Jupiter ordered her return, Pluto struck a deal with Jupiter, saying that since she had stolen his pomegranate seeds, she must stay with him four months of the year in return. For this reason, in spring when Ceres receives her daughter back, the crops blossom, and in summer they flourish.

In the autumn Ceres changes the leaves to shades of brown and orange (her favorite colors) as a gift to Proserpina before she has to return to the underworld. During the time that Proserpina resides with Pluto, the world goes through winter, a time when the earth is barren.

The most extensive myth of Proserpina in Latin is Claudian's (4th century CE). It is closely connected with that of Orpheus and Eurydice. In Virgil's Georgics, Orpheus' beloved wife, Eurydice, died from a snake-bite; Proserpina allowed Orpheus into Hades without losing his life; charmed by his music, she allowed him to lead his wife back to the land of the living, as long as he did not look back during the journey. But Orpheus could not resist a backward glance, so Eurydice was forever lost to him.[13][14] 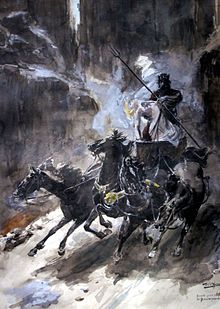 Rape of Proserpina, by Ulpiano Checa

Proserpina's figure inspired many artistic compositions, eminently in sculpture (Bernini,[15] see The Rape of Proserpina (Bernini) ) in painting (D.G.Rossetti,[16] a fresco by Pomarancio, J.Heintz,[17] Rubens,[18] A. Dürer,[19] Dell'Abbate,[20] Parrish[21]) and in literature (Goethe's[22] Proserpina and Swinburne's Hymn to Proserpine and The Garden of Proserpine) The statue of the Rape of Prosepina by Pluto that stands in the Great Garden of Dresden, Germany is also referred to as "Time Ravages Beauty". Kate McGarrigle's song about the legend was one of the last things she wrote prior to her death, and received its only performance at her last concert at Royal Albert Hall in December 2009.