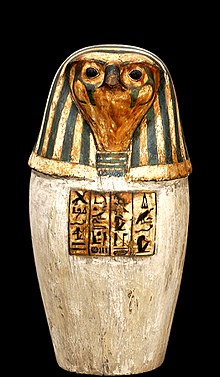 Qebehsenuef ("He who refreshes his brothers") is an ancient Egyptian deity. He is one of the four sons of Horus in Egyptian mythology, the god of protection and of the West.[1] In the preparation of mummies, his canopic jar was used for the intestines. He is seen as a mummy with a falcon head. He was said to be protected by the goddess Serket. The intestine was used in sacrificed animals, by soothsayers, to predict the future, whereas the intestines were also the victims of poison. With death by poison, the canopic jar deity is protected by Serket who bears the emblem of the scorpion.

[Qebhsennuf saith:] "I am thy son, O Osiris Ani, triumphant. I have come to protect thee. I have collected thy bones, and I have gathered together thy members. I have brought thy heart and I have placed it upon its throne within thy body. I have made thy house to flourish after thee, O thou who livest for ever.[2]

Together with Maa-atef-f, Kheri-beq-f, and Horus-Khenti-maa, the four sons of Horus (the other three were Imset, Hapi and Duamutef) were known as the Seven Shining Ones, protectors of the body of Osiris.