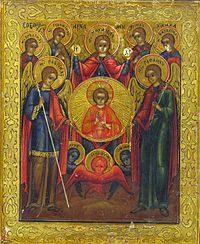 "Synaxis of the Archangel Michael" ("Собор Архистратига Михаила"). An Eastern Orthodox Church icon of the "Seven Archangels". From left to right: Jegudiel, Gabriel, Selaphiel, Michael, Uriel, Raphael, and Barachiel. Beneath the mandorla of Christ Emmanuel are representations of Cherubim (in blue) and Seraphim (in red).

The concept of Seven Archangels is found in some works of early Jewish literature.

The term archangel itself is not found in the Hebrew Bible or the Christian Old Testament, and in the Greek New Testament the term archangel only occurs in 1 Thessalonians 4:16 and the Epistle of Jude 1:9, where it is used of Michael, who in Daniel 10:13 is called 'one of the chief princes,' and 'the great prince'. In the Septuagint this is rendered "the great angel."[1]

The idea of seven archangels is most explicitly stated in the deuterocanonical Book of Tobit when Raphael reveals himself, declaring: "I am Raphael, one of the seven angels who stand in the glorious presence of the Lord, ready to serve him." (Tobit 12:15) The other two archangels mentioned by name in the Bible are Michael and Gabriel. The four names of the other archangels come from tradition.

One such tradition of archangels comes from the Old Testament biblical apocrypha, the third century BCE Book of the Watchers,[2] known as 1 Enoch or the Book of Enoch, eventually merged into the Enochic Pentateuch.[3][4] This narrative is affiliated with the Book of Giants, which also references the great archangels[5][6] and was made part of the Ethiopian Orthodox Tewahedo Church's scriptural canon. Although prevalent in Jewish and early Christian apostolic traditions and the early Christian Fathers, the Book of Enoch fell from academic and religious status, and by the seventh century was rejected from the canonical scriptures of all other Christian denominations, a banned and unknown work. The various surviving oral traditions recounted many differing lists of archangels.

The names entered Jewish tradition during the Babylonian captivity (605 BCE). Babylonian folklore and cosmology,[7] developing early Mesopotamian beliefs under the dualistic influence of Zoroastrianism, centered around anthropomorphic and zoomorphic representations of stars, planets, and constellations, including the four sons of the Sky Father carrying the Winged Sun, the throne of Wisdom. First the prophet Daniel, then authors such as Ezekiel hebraized this mythology, equating the Babylonian constellations with abstract forms held to be "sons of the gods", angels of the Lord of Israel, and heavenly animal cherubim. The 2 BC Book of the Parables (Ch XL) names the four angels accompanying the Ancient of Days, standing before the Lord of Spirits, "the voices of those upon the four sides magnifying the Lord of Glory": Michael, Raphael, Gabriel, and Phanuel.

The Book of the Watchers (Ch IX) lists the angels who in antediluvian times interceded on behalf of mankind against the rogue spirits termed "the Watchers": Michael, Gabriel, Raphael, and Uriel.

The earliest specific Christian references are in the late 5th to early 6th century: Pseudo-Dionysius gives them as Michael, Gabriel, Raphael, Uriel, Camael, Jophiel, and Zadkiel.[8] In most Protestant Christian oral traditions only Michael and Gabriel are referred to as "archangels", which echoes the most mainstream Muslim view, whereas Roman Catholic Christian traditions also include Raphael to complete a group of three.

Lists of characters referred to as "angels" also exist in smaller religious traditions usually regarded as occultist or superstitious. A reference to seven archangels appeared in an 8th or 9th-century talisman attributed to Auriolus, a "servant of God" in north-western Spain. He issues a prayer to "all you patriarchs Michael, Gabriel, Cecitiel, Oriel, Raphael, Ananiel, Marmoniel.[9] 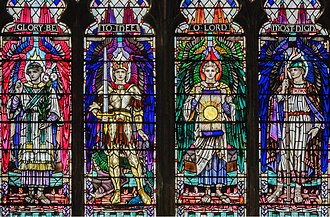 In the Catholic Church, three archangels are mentioned by name in its canon of scripture: Michael, Gabriel, and Raphael. Raphael appears in the deuterocanonical Book of Tobit, where he is described as "one of the seven angels who stand ready and enter before the glory of the lord of spirits",[10] a phrase recalled in Revelation 8:2–6.

As well as Uriel, the Book of Enoch, not regarded as canonical by any of these Christian churches, mentions (chapter 21) Raguel, Sariel, and Jerahmeel, while other apocryphal sources give instead the names Izidkiel, Hanael, and Kepharel.[12]

In the Coptic Orthodox tradition the seven archangels are named as Michael, Gabriel, Raphael, Suriel, Zadkiel, Sarathiel, and Ananiel.[13][14][15]

In Anglican and Episcopal tradition, there are three or four archangels in the calendar for September 29, the feast of St Michael and All Angels (also called Michaelmas), namely Michael, Gabriel, and Raphael,[16] and often also Uriel.[17][18][19][20][21]

Although in the Book of Enoch, Ramiel is described as one of the leaders of the 200 Grigori, the fallen angels, the leader is identified as Semjaza. Other names derived from pseudepigrapha and recognized by Eastern Orthodox and Oriental Orthodox churches are Selaphiel, Jegudiel, and Raguel.

In Ismailism, there are seven cherubim, comparable to the Seven Archangels ordered to bow down before Qadar, of whom Iblis refuses.[22]

Various occult systems associate each archangel with one of the traditional "seven luminaries" (classical planets visible to the naked eye): the sun, the moon, Mercury, Venus, Mars, Jupiter, and Saturn;[24] but there is disagreement as to which archangel corresponds to which body.

According to Rudolf Steiner, four archangels govern the seasons: spring is Raphael, summer is Uriel, autumn is Michael, and winter is Gabriel.[25]