From Wikipedia, the free encyclopedia
(Redirected from Shamash)
Jump to navigation Jump to search
ancient Mesopotamian Sun god and god of justice
This article is about the Mesopotamian Sun god. For other uses, see Utu (disambiguation).
"Shamash" redirects here. For the synagogue role, see gabbai. For the use in a Hanukkah menorah (Hanukkiah), see Menorah—Lighting.
Not to be confused with Uttu.

Utu,[a] later worshipped by the East Semitic Akkadian-speaking Assyrians and Babylonians as Shamash,[b] was the ancient Mesopotamian sun god, god of justice, morality, and truth, and the twin of the Mesopotamian goddess Inanna (Ishtar in the Assyrio-Babylonian language), the Queen of Heaven. His main temples were in the cities of Sippar and Larsa. He was believed to ride through the heavens in his sun chariot and see all things that happened in the day. He was the enforcer of divine justice and was thought to aid those in distress. According to Sumerian mythology, he helped protect Dumuzid when the galla demons tried to drag him to the Underworld and he appeared to the hero Ziusudra after the Great Flood. In the Epic of Gilgamesh, he helps Gilgamesh defeat the ogre Humbaba. 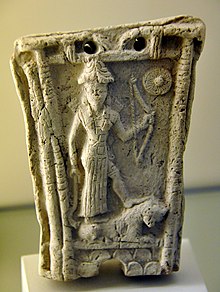 Goddess Ishtar stands on a lion and holds a bow, god Shamash symbol at the upper right corner, from Southern Mesopotamia, Iraq

Utu was the twin brother of Inanna,[4][5] the Queen of Heaven, whose domain encompassed a broad variety of different powers.[6][5] In Sumerian texts, Inanna and Utu are shown as extremely close;[7] in fact, their relationship frequently borders on incestuous.[7][8] Utu is usually the son of Nanna, the god of the moon, and his wife, Ningal,[9][10] but is sometimes also described as the son of An or Enlil.[9][10] His wife was the goddess Sherida, later known in Akkadian as Aya.[11][12][10]

Sherida was a goddess of beauty, fertility, and sexual love,[12] possibly because light was seen as inherently beautiful, or because of the sun's role in promoting agricultural fertility.[12] They were believed to have two offspring: the goddess Kittu, whose name means "Truth", and the god Misharu, whose name means "Justice".[12] By the time of the Old Babylonian Period (c. 1830 – c. 1531 BC), Sherida, and consequently Utu, was associated with nadītu, an order of cloistered women who devoted their lives to the gods.[10] Utu's charioteer Bunene is sometimes described as his son.[11][10] Bunene was worshipped independently from Utu as a god of justice in Sippar and Uruk during the Old Babylonian Period[11][10] and he was also worshipped at Assur.[11][10] The dream god Sisig is also described as his son.[13]

Utu was worshipped in Sumer from the very earliest times.[11] The oldest documents mentioning him date to around 3500 BC, during the first stages of Sumerian writing.[10] His main temples, which were both known as E-babbar ("White House"), were located in Sippar and in Larsa.[11] Utu continued to be venerated until the end of Mesopotamian culture[10] and was worshipped for well over 3,000 years.[10] Utu's main personality characteristics are his kindness and generosity,[10] but, like all other Mesopotamian deities, he was not above refusing a request which inconvenienced him.[10] In the Hurro-Akkadian bilingual Weidner god list, Utu is equated with the Hurrian sun-god Šimigi.[14] In the Ugaritic trilingual version of the Weidner god list, Šimigi and Utu are both equated with Lugalbanda.[15]

In Sumerian texts, Utu is described as "bearded" and "long-armed".[11] In art, he is shown as an old man with a long beard.[10] He was believed to emerge from the doors of Heaven every day at dawn and ride across the sky in his chariot before returning to the "interior of heaven" through a set of doors in the far west every evening.[11] Utu's charioteer was named Bunene.[16] Cylinder seals often show two gods holding the doors open for him as he wields his weapon, the pruning-saw,[11] a double-edged arch-shaped saw with large, jagged teeth, representing his role as the god of justice.[11] Utu's main symbol was the solar disc,[10] a circle with four points in each of the cardinal directions and four wavy, diagonal lines emanating from the circle between each point.[10] This symbol represented the light, warmth, and power of the sun.[10]

Utu was believed to take an active role in human affairs,[11] and was thought to aid those in distress.[11] In one of his earliest appearances in literature, in the Myth of Etana, written before the conquest of Sargon of Akkad (c. 2334–2284 BC), the hero Etana invokes Utu to help his wife conceive a child.[10] In the Sumerian poem The Dream of Dumuzid, Utu intervenes to rescue Inanna's husband Dumuzid from the galla demons who are hunting him.[11] In the Sumerian flood myth, Utu emerges after the flood waters begin to subside,[19][20] causing Ziusudra, the hero of the story, to throw open a window on his boat and fall down prostrate before him.[19][20] Ziusudra sacrifices a sheep and an ox to Utu for delivering him to salvation.[19][20]

In the Sumerian King List, one of the early kings of Uruk is described as "the son of Utu"[11] and Utu seems to have served as a special protector to several of that city's later kings.[11] In the Sumerian poem of Gilgamesh and Huwawa, the hero Gilgamesh asks Utu to assist him in his journey to the Cedar Mountain.[21] In this version, Gilgamesh asks Utu's help because Utu is associated with the Cedar Mountain, which is implied to be located in the far east, the land where the sun rises.[22] Utu is initially reluctant to help,[23] but, after Gilgamesh explains that he is doing this because he intends to establish his name, because he knows he will eventually die, Utu agrees.[22] Once Gilgamesh reaches the Cedar Mountain, Utu helps him defeat the ogre Huwawa, who lives there.[23]

In the standard Babylonian Epic of Gilgamesh, Gilgamesh's plan to visit the Cedar Mountain is still his own idea and he goes to Shamash for aid.[24] In this version, however, the Cedar Mountain is explicitly stated to be located in the northwest, in Lebanon.[25] Shamash helps Gilgamesh defeat Humbaba (the East Semitic name for Huwawa).[11][26] Jeffrey H. Tigay suggests that Lugalbanda's association with the sun-god in the Old Babylonian version of the epic strengthened "the impression that at one point in the history of the tradition the sun-god was also invoked as an ancestor".[27] In the Sumerian version, Gilgamesh's initial quest is to visit the Cedar Mountain and Humbaba is merely an obstacle that Gilgamesh and Enkidu encounter once they have already arrived there,[28] but, in the Babylonian version, defeating Humbaba is the initial quest on which the heroes embark.[29] In a late version of the Gilgamesh story, Shamash becomes the instigator of the quest, the one who instructs Gilgamesh to go slay Humbaba to begin with.[29] Tigay describes this as the "final and logical development of [Shamash's] role."[29]

The authors of the Hebrew Bible generally attempt to portray the sun in a non-anthropomorphic manner, sometimes using it as a symbol of Yahweh's power.[30] The Hebrew word for "sun", šapaš or šemeš, is often substituted for euphemisms, such as the word or, meaning "light".[30] These authors appear to have made a conscious effort to avoid implications of sun worship, even of a Yahwistic variety, at all costs.[30] Specifically, God creates the "greater light," the "lesser light," and the stars.

According to Victor Hamilton, most scholars agree that the choice of "greater light" and "lesser light", rather than the more explicit "Sun" and "Moon", is anti-mythological rhetoric intended to contradict widespread contemporary beliefs that the Sun and the Moon were deities themselves.[31] However, the Woman of the Apocalypse in the Book of Revelation, may directly allude to ancient Near Eastern sun goddesses.[30]