From Wikipedia, the free encyclopedia
Jump to navigation Jump to search
Societal or cultural prohibition
For other uses, see Taboo (disambiguation).

A taboo is an implicit prohibition on something (usually against an utterance or behavior) based on a cultural sense that it is excessively repulsive or, perhaps, too sacred for ordinary people.[1][2] Such prohibitions are present in virtually all societies.[1] On a comparative basis taboos, for example related to food items, seem to make no sense at all as what may be declared unfit for one group by custom or religion may be perfectly acceptable to another.

Taboos are often meant to protect the human individual, but there are numerous other reasons for their existence. An ecological or medical background is apparent in many, including some that are seen as religious or spiritual in origin. Taboos can help use a resource more efficiently, but when applied to only a subsection of the community they can also serve to suppress said subsection of the community. A taboo acknowledged by a particular group or tribe as part of their ways, aids in the cohesion of the group, helps that particular group to stand out and maintain its identity in the face of others and therefore creates a feeling of "belonging".[3]

The meaning of the word "taboo" has been somewhat expanded in the social sciences to strong prohibitions relating to any area of human activity or custom that is sacred or forbidden based on moral judgment, religious beliefs, or cultural norms.[3] "Breaking a taboo" is usually considered objectionable by society in general, not merely a subset of a culture.

The term "taboo" comes from the Tongan tapu or Fijian tabu ("prohibited", "disallowed", "forbidden"),[4] related among others to the Maori tapu and Hawaiian kapu. Its English use dates to 1777 when the British explorer James Cook visited Tonga, and referred to the Tongans' use of the term "taboo" for "any thing is forbidden to be eaten, or made use of".[5] He wrote:

Not one of them would sit down, or eat a bit of any thing.... On expressing my surprise at this, they were all taboo, as they said; which word has a very comprehensive meaning; but, in general, signifies that a thing is forbidden.[6]

The term was translated to him as "consecrated, inviolable, forbidden, unclean or cursed."[7] Tabu itself has been derived from alleged Tongan morphemes ta ("mark") and bu ("especially"), but this may be a folk etymology (Tongan does not actually have a phoneme /b/), and tapu is usually treated as a unitary, non-compound word inherited from Proto-Polynesian *tapu, in turn inherited from Proto-Oceanic *tabu, with the reconstructed meaning "sacred, forbidden."[8][9][10] In its current use on Tonga, the word tapu means "sacred" or "holy", often in the sense of being restricted or protected by custom or law. On the main island, the word is often appended to the end of "Tonga" as Tongatapu, here meaning "Sacred South" rather than "Forbidden South". 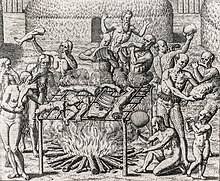 Sigmund Freud speculated that incest and patricide were the only two universal taboos and formed the basis of civilization.[11] However, although cannibalism, in-group murder, and incest are taboo in the majority of societies, exceptions can be found, such as marriages between brothers and sisters in Roman Egypt.[12][13] Modern Western societies, however, do not condone such relationships. These familial sexual activities are criminalised, even if all parties are consenting adults. Through an analysis of the language surrounding these laws, it can be seen how the policy makers, and society as a whole, find these acts to be immoral.[14][15][16]

Common taboos involve restrictions or ritual regulation of killing and hunting; sex and sexual relationships; reproduction; the dead and their graves; as well as food and dining (primarily cannibalism and dietary laws such as vegetarianism, kashrut, and halal) or religious (treif and haram). In Madagascar, a strong code of taboos, known as fady, constantly change and are formed from new experiences. Each region, village or tribe may have its own fady.[citation needed]

The word "taboo" gained popularity at times, with some scholars looking for ways to apply it where other English words had previously been applied. For example, J. M. Powis Smith, in his book The American Bible (editor's preface 1927), used "taboo" occasionally in relation to Israel's Tabernacle and ceremonial laws, including Exodus 30:36, Exodus 29:37; Numbers 16:37–38; Deuteronomy 22:9, Isaiah 65:5, Ezekiel 44:19 and Ezekiel 46:20.

Albert Schweitzer wrote a chapter about taboos of the people of Gabon. As an example, it was considered a misfortune for twins to be born, and they would be subject to many rules not incumbent on other people.[17]

Communist and materialist theorists have argued that taboos can be used to reveal the histories of societies when other records are lacking.[18] Marvin Harris particularly endeavored to explain taboos as a consequence of ecologic and economic conditions.[19]

Some argue that contemporary Western multicultural societies have taboos against tribalisms (for example, ethnocentrism and nationalism) and prejudices (racism, sexism, and religious extremism).[20]

Changing social customs and standards also create new taboos, such as bans on slavery; extension of the pedophilia taboo to ephebophilia;[21] prohibitions on alcohol, tobacco, or psychopharmaceutical consumption (particularly among pregnant women); and the employment of politically correct euphemisms – at times quite unsuccessfully – to mitigate various alleged forms of discrimination.

Incest itself has been pulled both ways, with some seeking to normalize consensual adult relationships regardless of the degree of kinship[22] (notably in Europe)[23][24] and others expanding the degrees of prohibited contact (notably in the United States.)[25] Although the term taboo usually implies negative connotations, it is sometimes associated with enticing propositions in proverbs such as forbidden fruit is the sweetest.[26]

In medicine, professionals who practice in ethical and moral grey areas, or fields subject to social stigma such as late termination of pregnancy, may refrain from public discussion of their practice. Among other reasons, this taboo may come from concern that comments may be taken out of the appropriate context and used to make ill-informed policy decisions.[27][28]

This audio file was created from a revision of the article "Taboo" dated 2019-12-27, and does not reflect subsequent edits to the article. (Audio help)
More spoken articles