From Wikipedia, the free encyclopedia
(Redirected from Thalia (muse))
Jump to navigation Jump to search 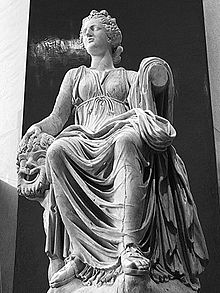 Roman statue of Thalia from Hadrian's Villa, now at the Prado Museum (Madrid) 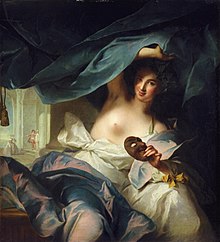 Thalia (/θəˈlaɪə/[1][2] or /ˈθeɪliə/;[3] Ancient Greek: Θάλεια; "the joyous, the flourishing", from Ancient Greek: θάλλειν, thállein; "to flourish, to be verdant"), also spelled Thaleia, was the goddess who presided over comedy and idyllic poetry. In this context her name means "flourishing", because the praises in her songs flourish through time. She was the daughter of Zeus and Mnemosyne, the eighth-born of the nine Muses.

According to pseudo-Apollodorus, she and Apollo were the parents of the Corybantes.[4] Other ancient sources, however, gave the Corybantes different parents.[5]

She was portrayed as a young woman with a joyous air, crowned with ivy, wearing boots and holding a comic mask in her hand. Many of her statues also hold a bugle and a trumpet (both used to support the actors' voices in ancient comedy), or occasionally a shepherd's staff or a wreath of ivy.