From Wikipedia, the free encyclopedia
Jump to navigation Jump to search
receptacle which contains a synagogue's Torah scrolls 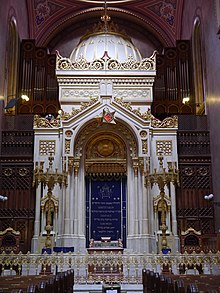 Torah ark of the Dohány Street Synagogue, built in 1854.

Torah ark (or Aron Kodesh) refers to an ornamental chamber in the synagogue that houses the Torah scrolls.[1] 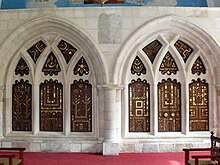 Arks in the Yochanan ben Zakai Synagogue in Old Jerusalem. The building was originally constructed in the 17th century.

The ark, also known as the ark of law, or in Hebrew the Aron Kodesh or aron ha-Kodesh ("holy ark") by Ashkenazi communities and as the Heikhal ("sanctuary") among Sefardi communities. Aron Kodesh comes from Hebrew אָרוֹן קׄדֶש ʼārōn qōdeš (i.e. Aron Kodesh), Holy Ark. This name is a reference to the ’ārōn haqqōdeš, the Hebrew name for the Ark of the Covenant which was stored in the Holy of Holies in the inner sanctuary of both the ancient Tabernacle and the Temple in Jerusalem. Similarly, Hekhál, also written hechal, echal or heichal — and sometimes also Echal Kodesh (mainly among Balkan Sephardim) comes from Hebrew הֵיכָל hēkhāl (palace), was used in the same time period to refer to the inner sanctuary. The hekhal contained the Menorah, Altar of Incense, and Table of the Showbread.

In some ancient synagogues, such as the fifth-century synagogue in Susya, the Torah scroll was not placed inside the synagogue at all, but in a room adjacent to it, signifying that the sacredness of the synagogue does not come from the ark but from its being a house of prayer. The Torah was brought into the synagogue for reading purposes.

In synagogues outside of Jerusalem, the ark is placed in a chamber that is in a recess in the wall, facing Jerusalem, and worshipers face this direction when reciting prayers of the service such as the Amidah.

The ark is often closed with a parochet ("curtain") placed either outside the doors of the Holy Ark (Ashkenazi and Mizrachi custom) or inside the doors of the ark (Spanish and Portuguese and Moroccan or Sephardic custom). The parochet is an ornate cloth that resembles the same cloth that was once on the golden Ark. Both the aron kodesh and parochet are usually inscribed with verses from Judaic holy scripture. These inscriptions generally display the purity of the synagogue or the celebrated uniqueness of the scrolls placed within.[2]

Jewish law states the ark is the second holiest part of a synagogue after the Torah scrolls themselves. Customs call for the congregation when reciting key prayers (such as Avinu Malkeinu – “Our Father Our King” ), to stand and face the ark, on fasting days, the Ten Days of Repentance between Rosh Hashana and Yom Kippur (also called the High Holidays), and for many piyyutim (poems, songs, etc.) recited during High Holy Day services. Many who partake in these customs consider it respectful to stand as long as the ark is open and the Torah is being moved to the reading table (or podium). However, there is no actual obligation (law) to remain standing when the ark is open, but it is a universally accepted custom.[3] In addition to this custom is the custom to never turn ones back towards the ark even when leaving the sanctuary. Instead one must back out until you have left the vicinity of the ark and only then can you turn your back (by the Kotel which is considered as a synogauge itself, this custom also exists).

Evolution of the modern ark[edit]

Originally, the scrolls were placed in moveable containers that were risen up. The more permanent placement of the ark was designed as the tribes settled and built temples. As early as 245 C.E. in the synagogue of Dura-Europos a slit within the holy wall (or wall facing Jerusalem) was created for the ark.[4] In ancient times, the cloth wrapped scrolls are believed to have been placed flat within a low wooden box. Historical records or discoveries point to a variety of exterior designs becoming popular within the Jewish culture of the time. Archeologists found early Torah arks within the Jewish catacombs in Rome decorated with Pompeian frescoes, paintings, and graffiti.

Throughout Europe, in the Middle Ages, designs favored taller arks. In the 14th and 15th centuries, Spanish and German Jewish Hebrew texts depict a new design. These texts placed the scrolls inside the ark standing upright, decorated, and wrapped with the appropriate cloth and covers. A Sephardic synagogue based in Amsterdam (c.1675) contains a baroque style ark, which takes up the entire width of the central hub of the building. The Sephardic synagogue based as far north as London (c. 1701) adopted the design as mainstream. In this period, most synagogues in Europe were designed with the reading table (or podium) in the center of the building. The ark was placed on the Eastern wall, so the congregation would be facing Jerusalem when praying.[4]

During the 18th century, German synagogues incorporated a baroque style design. Decorative features such as pilasters, columns, and vases became a standard practice. Wood and stone carvers in Eastern Europe began to employ unique local craft designs in synagogue architecture. Folk art and animals were popular designs features added to the ark during this period. Early designs in the United States featured built-in ark’s in synagogues. Examples such as the 1763 Touro Synagogue in Newport, Rhode Island. That was inspired by a trend of grandeur in architectural design. The United States Jewish community continued to favor the grand or classical design style until around 1840. In the mid-1800s the Moorish style synagogues influenced by the Oriental style became the latest fashion in synagogue design. The Oriental ark design included sliding doors and a curved forepart. The most notable features of this era included domes and arches that contained geometrical polychrome designs. Many synagogue styles from the 16th to the 19th century can be seen across American and throughout Europe. However, after World War II, the ark design evolved into an art form. New experimental forms and materials were employed in the making of modern arks based on the unique interests of the community commissioning the ark.[5]