A treadmill is a device generally for walking, running or climbing while staying in the same place. Treadmills were introduced before the development of powered machines, to harness the power of animals or humans to do work, often a type of mill that was operated by a person or animal treading steps of a treadwheel to grind grain. In later times, treadmills were used as punishment devices for people sentenced to hard labour in prisons. The terms treadmill and treadwheel were used interchangeably for the power and punishment mechanisms.

More recently, treadmills are not used to harness power, but as exercise machines for running or walking in one place. Rather than the user powering the mill, the machine provides a moving platform with a wide conveyor belt driven by an electric motor or a flywheel. The belt moves to the rear, requiring the user to walk or run at a speed matching that of the belt. The rate at which the belt moves is the rate of walking or running. Thus, the speed of running may be controlled and measured. The more expensive, heavy-duty versions are motor-driven (usually by an electric motor). The simpler, lighter, and less expensive versions passively resist the motion, moving only when walkers push the belt with their feet. The latter are known as manual treadmills.

According to Sports & Fitness Industry Association, treadmills continue to be the largest selling exercise equipment category by a large margin.[1] As a result, the treadmill industry counts with hundreds of manufacturers throughout the world.[citation needed]

The origins of the treadmill can be traced back to the 1st century AD. The Ancient Romans used a treadwheel or polyspaston crane for manipulating heavy objects.[citation needed]

The first consumer treadmill for home use was developed by William Staub, a mechanical engineer.[citation needed] Staub developed his treadmill after reading the 1968 book, Aerobics, by Kenneth H. Cooper. Cooper's book noted that individuals who ran for eight minutes four-to-five times a week would be in better physical condition. Staub noticed that there were no affordable household treadmills at the time and decided to develop a treadmill for his own use during the late 1960s. He called his first treadmill the PaceMaster 600. Once finished, Staub sent his prototype treadmill to Cooper, who found the machine's first customers, which included sellers of fitness equipment.

Treadmills as power sources originated in antiquity.[2] These ancient machines came in three major designs.[3] The first was to have a horizontal bar jutting out of a vertical shaft. It rotated around a vertical axis, driven by an ox or other animal walking in a circle pushing the bar. Even humans were used to power them. The second design was a vertical wheel, a treadwheel, that was powered through climbing in place instead of walking in circles. This is similar to what we know today as the hamster wheel. The third design also required climbing but used a sloped, moving platform instead.

Treadmills as muscle powered engines originated roughly 4000 years ago.[citation needed] Their primary use was to lift buckets of water. This same technology was later adapted to create rotary grain mills and the treadwheel crane. It was also used to pump water and power dough-kneading machines and bellows.

Treadmills for punishment were installed in 1818 by an English engineer named Sir William Cubitt, son of a miller. Noting idle prisoners at Bury St Edmunds gaol, he proposed using their muscle power to both cure their idleness and produce useful work.[4]

Cubitt's treadmills for punishment usually rotated around a horizontal axis, requiring the user to step upwards, like walking up an endless staircase. Those punished walked around the outside of the wheel holding a horizontal handrail for stability.

They remained in use until the second half of the 19th century; they were like twenty-foot long paddle wheels with twenty-four steps around a six-foot cylinder. Several prisoners stood side-by-side on a wheel, and had to work six or more hours a day, effectively climbing 5,000 to 14,000 vertical feet (1,5 to 4 km). While the purpose was mainly punitive, the most infamous mill at Brixton Prison was installed in 1821 and used to grind grain to supplement an existing windmill which Cubitt had previously installed nearby. It gained notoriety for the cruelty with which it was used, which then became a popular satirical metaphor for early-19th century prisons.

The machines could also be used to pump water or power ventilators in mines.[5][6]

The forerunner of exercise treadmills was designed to diagnose heart and lung diseases, and was invented by Robert Bruce and Wayne Quinton at the University of Washington in 1952.[8] Kenneth H. Cooper's research on the benefits of aerobic exercise, published in 1968, provided a medical argument to support the commercial development of the home treadmill and exercise bike.

Treadmill ergometers are now mainly motor driven. Most treadmills have a running table with sliding plate. Before and after the race table, there are two shafts. The running belt is stretched between the shafts and the running deck. Safety standards for treadmills are the IEC EN 957-1 and IEC EN 957-6.

Medical treadmills are class IIb active therapeutic devices and also active devices for diagnosis. With their very powerful (e.g. 3.3 kW = 4.5 HP) electric motor powered drive system treadmills deliver mechanical energy to the human body through the moving running belt of the treadmill. The subject is not changing his horizontal position and is passively moved and forced to catch up with the running belt underneath his feet. The subject can also be fixed in safety harnesses, unweighting systems, various supports or even fixed in and moved with a robotic orthotic system utilizing the treadmill.

Medical treadmills are also active measuring devices. When connected through an interface with ECG, ergospirometry, blood pressure monitor (BPM), or EMG, they become a new medical system (e.g., stress test system or cardiopulmonary rehabilitation system) and can also be equipped to measure VO2max and various other vital functions.

Most treadmills have a “cardio mode”, where a target heart rate is defined and the speed and elevation (load) is controlled automatically until the subject is in “heart rate steady state”. So the treadmill is delivering mechanical energy to the human body based on the vital function (heart rate) of the subject.

A medical treadmill which is also used for ergometry and cardiopulmonary stress test as well as performance diagnostics is always a class IIb medical device either when used as stand-alone device in a medical environment or when used in connection with an ECG, EMG, ergospirometry, or blood pressure monitoring device.

On the running deck the subject is moving, who adapts to the adjustable speed of the belt. The running deck is usually mounted on damping elements, so the running deck has shock absorbing characteristics. By a lifting element, the entire frame including treadmill running deck will be raised and thus simulates a pitch angle for uphill running. Some treadmills also have the reversing of a running belt for the purpose of downhill loads. Most treadmills for professionals in the fitness area, run for table sizes of about 150 cm long and 50 cm width, a speed range of about 0 ... 20 km/h and slope angle of 0 ... 20%.

For athletes, larger and more stable treadmills are necessary. Sprinters reach with some weight relief temporarily speeds of up to 45 km/h must therefore run on a large deck of up to 300 cm in length and have up to 100 cm width. At high physical exertion and increased risk of falling, a fall stop unit is required to prevent a fall of the subjects or patients. This fall stop device is usually implemented by a safety arch on which a rope is attached to an electrical switch. A harness bears the subject preventing from falling and shuts down the running belt.

In some offices, employees are provided with treadmill desks so that employees can walk while working on a computer or speaking on the phone.[9]

In treatment centers, treadmills are used with built-in seats left and right for therapists, for example, so the therapists can move the legs of a stroke patient in order to simulate walking movements and learn to walk again. This is called manual locomotion therapy.

Oversized treadmills are also used for cycling at speeds up to 80 km/h, for wheelchair users and in special applications with thick running belt for cross-country skiing and biathlon, where athletes perform training and testing exercise with roller ski on a running deck of up to sizes of 450 x 300 cm.

As a cardiovascular exercise:

As an indoor activity:

A treadmill can lose its speed and performance if not maintained from time to time. Starting from positioning of the treadmill to regular oil checks, a treadmill’s longevity is decided on how it is maintained.

Ideally, a treadmill is placed on a leveled floor in order to ensure the belt and motor have a proper balanced movement. In case of uneven floors, the elevation of either of the legs (rear or front legs) are leveled out using a wood block or a brick.

Dirt that gets accumulated on a treadmill can also cause malfunction. Dirt on the belt or the deck is cleared by wiping the belt and the sides of the treadmill once or twice a month using a cloth or a wet sponge.

The conveyor belt is an important part that is responsible for the functioning of the treadmill. Regular maintenance for the belt includes 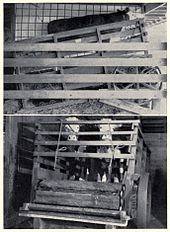 Steers on a treadmill

As it is basically a conveyor belt, the treadmill can be used for activities other than running. If horses are being tested (especially in jockey racing) they will be put on a specially constructed treadmill. Large treadmills can also accommodate cars. Treadmills can also be used to exercise dogs that are accustomed to running on a conveyor; however, tying the leash to the treadmill should be avoided as it can cause serious injury. 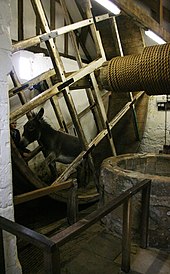 Military working dog, walks on an underwater treadmill to recover from an injury

Underwater treadmills are a type of treadmill encased in glass or plastic and filled with water to a point where the occupant is partially submerged. They are used for both humans and animals, often for physical therapy.[12]

Dog/pet and underwater pet treatment treadmills are available for both home and clinical use. A variety of makes and models are available, but key features of treadmills designed for pet use include a longer running surface, open front and back entries and side rails to prevent the pet from falling off the treadmill. None are designed to be used without human supervision. Many veterinary and animal rehabilitation clinics also offer underwater treadmill therapy as part of their services provided to clients' pets.

Advanced applications are so called omnidirectional treadmills. They are designed to move in two dimensions and are intended as the base for a "holodeck". There are several solutions which were proposed and research continues because some issues remain unsolved, such as large size, noise and vibration. There are parallel developments being conducted by researchers working on projects sponsored by the Department of Veterans Affairs to create virtual reality environments for a wheelchair trainer in order to promote therapeutic exercise.[13]